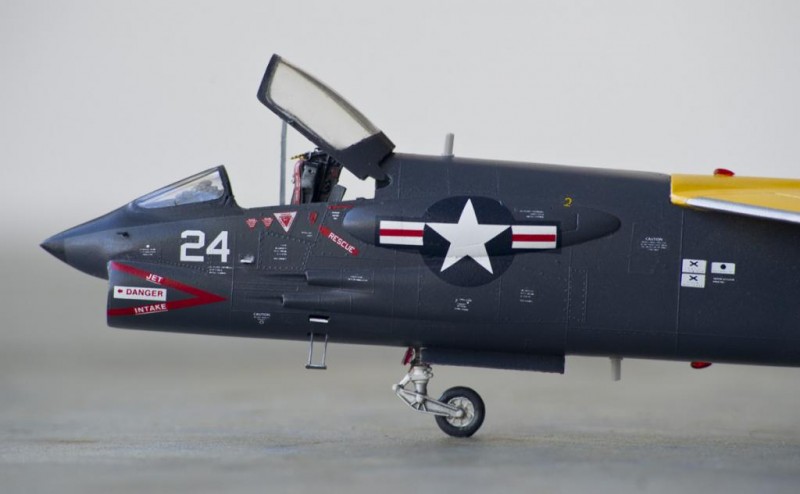 Here's my attempt at backdating the 1/48 Monogram F-8E Crusader into a DF-8A drone controller/utility aircraft from the Naval Missile Center at Point Mugu, California during the late '60's-early '70's. I started this project ten years ago, but shelved it when I realized how involved it really was, and that I lacked the proper references. I finally resumed the project last fall.

I used the venerable Monogram 1/48 F-8E, and a few parts from the Cobra Company F-8 backdate set. Monogram's Crusader makes a decent F-8E out of the box, but there are many minor and a few major changes you must make to any F-8E kit to backdate it to the earlier A version. I'm sure I missed some things, but here's what I did:

I removed and filled in the dorsal avionics 'hump' on top of the wing, filled in the holes and slots for the afterburner cooling scoops and ventral fins, installed a fuel dump vent on the rear port side, removed the ECM fairing from the vertical fin, and filled in the vents just behind the nose cone ( though I should have left the three vents on the right side!). The cockpit was a resin replacement from Black Box (but the intsturment panel isn't right). I used the main gear from the Cobra Company backdate set, along with the earlier spoked nose wheel. I also used the Cobra replacement nose cone, but heavily modified it. The hardest - and most crucial - part of the project was getting the shape of the earlier nose correct. It's more of a flattened oval. In profile, it's almost flat on top, and slightly curved on the bottom. While no where near perfect, the shape I wound up with is at least in the ball park. The afterburner section on Monogram's kit is incorrect - the burner nozzle is missing. I used a cut-down section of an old Monogram F-18 exhaust cone to replicate the nozzle. The antennas and pitot probe were taken from leftover parts from a Hasegawa A-4 Skyhawk kit. I also scratchbuilt the ejection face curtain pull rings, refueling probe light, tail hook, a canopy restraint strap, steps and a boarding ladder. I also added lots of plastic rod and wire to the main wheel wells to busy them up some. The decals came from several different sheets from my scrap box, with the Naval Missile Center markings courtesy of Mike Grant.

Finally, many thanks to Tom Weinel, a former F-8 pilot, who provided me with the necessary information, photos and encouragement needed to do this conversion. 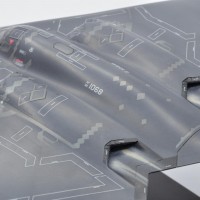 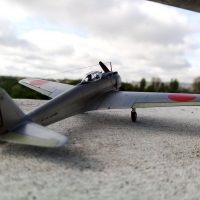 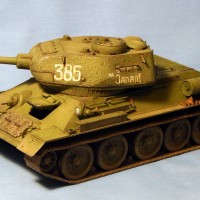 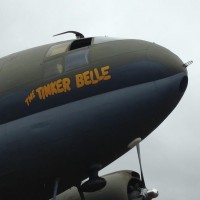