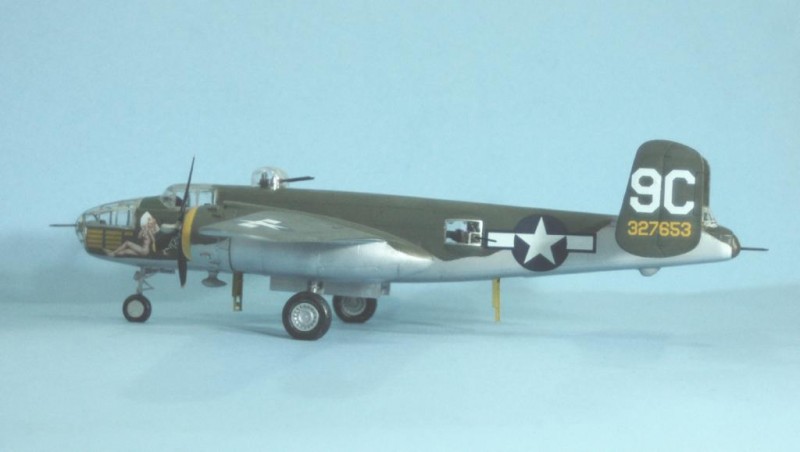 Doc Daneeka: “Of course he is. He has to be crazy to keep flying after all the close calls he’s had.”

Yossarian: “Why can’t you ground him?”

Yossarian: “That’s all he’s gotta do to be grounded?

Yossarian: “Then you can ground him?”

Doc Daneeka: “No. Then I cannot ground him.”

Doc Daneeka: “Sure. Catch‑22. Anyone who wants to get out of combat isn’t really crazy, so I can’t ground him.”

Doc Daneeka: “It’s the best there is.”

The B-25s based on Corsica have perhaps interested modelers more than any other B-25 unit except the 345th “Air Apaches”, in large part due to a book written by a navigator of the 488th Bomb Squadron of the 340th Bomb Group. “Catch 22″ by Joseph Heller is ranked as one of the greatest war novels ever written, and is Heller’s memorial to the men who flew from“USS Corsica” in 1944-45 during the air war over northern Italy and southern France. Here’s the real story:

The 340th Bomb Group was activated on August 20, 1942, and trained on B‑25’s. The unit was the last bomb group to arrive in North Africa, showing up in March, 1943, entering combat April, in time to fly missions in support of the British Eighth Army’s assault on the Mareth Line while assigned to the 9th Air Force. The first major campaign following the German surrender in North Africa that the unit took part in was the bombing of the islands of Pantelleria and Lampedusa in May-June 1943, which led to the surrender of the islands without need of a military invasion, the only time air forces ever accomplished such a thing. That August, the 340th BG received a Distinguished Unit Citation for operations during the period April-August 1943 in support of the British Eighth Army in Tunisia and Allied forces in Sicily.

During the Italian campaign from September 1943 to March 1944, the 340th bombed airfields, railroads, bridges, road junctions, supply depots, gun emplacements, troop concentrations, marshaling yards and factories in Italy, Bulgaria, Albania, Yugoslavia, and Greece while based at Pompeii Airfield near Terzigno, Italy just a few kilometers from the foot of Mount Vesuvius.

The last great eruption of Mount Vesuvius occurred on March 18-23, 1944, and rivaled that of 79 AD which saw the destruction of Herculaneum and Pompeii. The volcano did more damage to the USAAF in its Foggia complex of bases than the Germans managed to do in the entire Mediterranean campaign. The volcano destroyed 88 of the 340th Bomb Group’s aircraft. The hot volcanic ash that covered nearly all of the Mitchells burned fabric control surfaces, and glazed, melted, or cracked plexiglass. Some B‑25s were tipped on their tails from the weight of the ash once it entered the aircraft through wrecked canopies and turrets. No lives were lost in this event, but the effects of the volcano turned out to be insurmountable, despite a major effort to repair and salvage the damaged aircraft.

American aircraft production being what it was in 1944, the losses were made good by early April 1944, as the 340th BG, the 310th and the 321st Bomb Groups were all re-equipped with brand new B-25J Mitchells, flying their first mission after the eruption on April 15, 1944. XII Tactical Air Command needed the three Mitchell groups, and was afraid of more eruptions from Vesuvius, in addition to the fact the Fifteenth AF wanted to take over the Foggia complex. As a result, the 340th, the 310th and the 321st Bomb Groups were moved with the rest of the fighter, bomber and reconnaissance units of the 57th Wing to the island of Corsica, where they were far removed from any further peril from Mount Vesuvius, and were also placed strategically to provide better support for the Italian campaign as the lines moved through central Italy and on into the northern half of the peninsula over the next year of the war, in addition to positioning the aircraft to make raids on southern France, southern Austria and Yugoslavia. So many Allied aircraft were based on Corsica that it became known as “USS Corsica” for its position as a stationary aircraft carrier in the Mediterranean.

On the night of May 13-14, 1944, Lehrgeschwader 1 mounted a bombing raid on the Allied airfields on Corsica. The event is memorialized in the novel as the raid where Milo Minderbinder “pays off” the Germans for his business dealings, and tells Yossarian that anyone in the unit who is killed will have his share of the profits from “MM Industries” sent to their family.

Following this raid, many of the 57th Wing’s B-25s were hurriedly camouflaged on their upper surfaces with British or Italian dark green paint applied roughly to the silver upper surfaces of these otherwise-unpainted aircraft, giving the unit a very distinctive look for the remainder of the war as the survivors continued to make their missions.

On September 23, 1944, the 340th sank the Italian cruiser “Taranto” in the harbor of La Spezia before the Germans could sink the ship and block the harbor entrance, winning their second DUC for this mission.

Flying from Corsica, the 340th and the other groups participated in the invasion of southern France that August, and in attacks against lines of communication in Northern Italy from September 1944 to April 1945, during which period the unit effectively took 100 percent losses, which certainly demonstrates why there would be a “Catch-22″ to keep aircrew from quitting. The main campaign began on November 6, 1944, with the aim of cutting the German reinforcements through the Brenner Pass. Operation Bingo, as it was named, lasted until the first week of April, and involved taking out the electrical power stations to force the Germans to replace the electric trains with coal-fired locomotives which would place a strain on the overall Axis transportation system to make up this difference, as well as lower the supplies brought in through the need to bring in coal for the trains. Additionally, all the rail yards and bridges between Bologna, Italy, and Augsburg were attacked and destroyed. By the end of the campaign, German replacement had been reduced from 200% of minimum daily need to 15% of minimum daily need, and was instrumental in the Allied breakthrough of the Gothic Line at the begining of April 1944, which led to the surrender of German forces in Italy on April 24, 1945.

“Catch 22” was real. The Italian front was seen as secondary, and after the Allied invasion of France, replacements became more and more difficult to obtain. The mission count rose from 30 in October 1944 to 35 in November to 40 in December. In January 1945, crews were informed they would be there “for the duration.” Captain Paul Jackson of the 445th Bomb Squadron of the 321st Bomb Group flew his first mission on November 6, 1944. By the last mission on April 24, 1945, he had flown 70 missions, and his “score” was not out of line with the rest of the group.

During this period, the 340th specialized largely in close support and “bridge‑busting,” repeatedly hitting rail bridges, viaducts and tunnels, in the Italian Alps and Appenine Mountains to create road blocks. During the Brenner campaign, the 340th flew more missions than any other medium bomb group.

The 340th Bomb Group flew its last bombing mission on April 26, 1945, slightly more than 25 months after it first went into action in Tunisia. While the 340th was one of the last medium bomb groups to enter combat in the Mediterranean Theater, over the course of 898 missions it set the highest “bomb tonnage dropped” mark for medium bomber units in the MTO by the end of the war and additionally maintained the best bombing accuracy record in the MTO during the last year of the war.

The kit is the 1/48 Monogram B-25J, using Mike Kloppenburg’s Bombshell Decals sheet to do “Ruthie,” one of the most well-known B-25s of the 340th Bomb Group.

The battle of the B-25s from USS Corsica will be the topic of my next book. 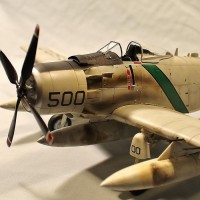 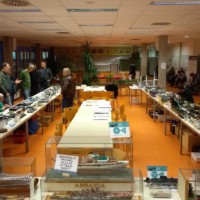 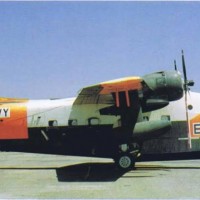 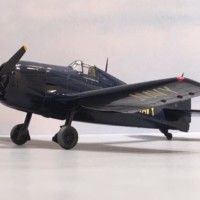