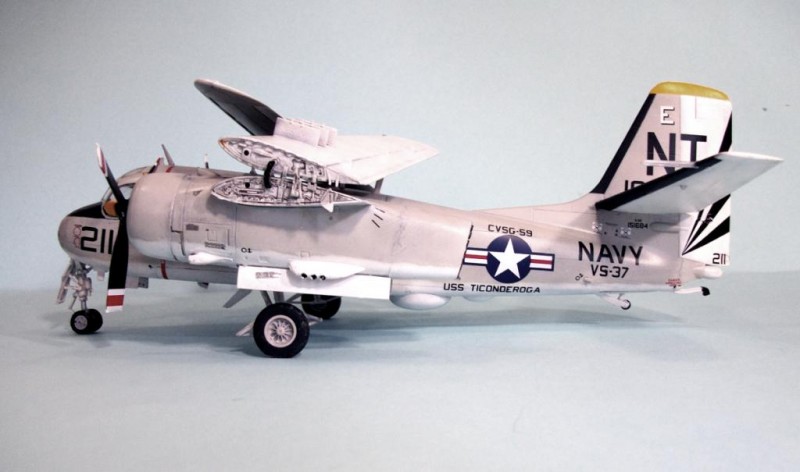 The Grumman S2F, nicknamed the “Stoof,” revolutionized carrier-based anti-submarine warfare. Designed in 1951 to a Navy specification calling for an aircraft capable of performing both the “hunter” and “killer” role in ASW, Grumman was awarded a contract for the G-89 design on June 30, 1950, with the first prototype XS2F-1 flying on December 4, 1952. The S2F-1 entered service with VS-26 in February 1954.

Powered by two 1,525 h.p. Wright R-1820 Cyclones, the S2F-1 has a wingspan that is close to that of the North American B-25, and is only slightly shorter in fuselage length than that medium bomber. With wing-folding, the overall span is reduced to only slightly more than the span of the horizontal stabilizer. Combining both hunter and killer roles meant that a carrier could carry fewer aircraft than a squadron equipped with the Grumman A2F “Guardian,” with more capability.

The S2F-1 entered license production by deHavilland Canada as the CS2F-1 and CS2F-2, with 100 built, It initially served aboard HMCS Bonaventure, replacing the aging Fairey Fireflies of VS-880 squadron. Some Canadian Trackers were transferred to the Brazilian Air Force, where they operated off the carrier Minas Gerais. 24 Canadian aircraft were also transferred to the Royal Netherlands Navy, where they served alongside 24 Grumman-built aircraft, operating from Curacao in the Caribbean and aboard the carrier Karel Doorman. Grumman-built aircraft also equipped the Argentine Navy, the Italian Air Force, and the Japanese Maritime Self-Defense Force. They later were operated by the Thai Navy and later the Republic of China Navy on Taiwan.

The designation changed to S-2A in 1962. In 1959, the S2F-3S first appeared, later designated S-2D. This sub-type introduced major changes, with the fuselage lengthened 18.5 inches ahead of the wing, and widened 3.25 inches, while wingspan was increased by 35 inches. The tail surfaces were enlarged, and fuel capacity was increased sufficient to increase on-station patrol endurance from 6 hours with a range of 900 miles for the S-2A to 9 hours and a range of 1,352 miles for the S-2D. Avionics were improved, a more powerful searchlight was installed, and an improved MAD boom. When the S-2D was equipped with AQA-3 Jezebel acoustic search equipment and the Julie explosive echo-ranging equipment, the aircraft was redesignated the S-2E. When the Lockheed S-3A was delayed, the S-2E was upgraded to S-2G with newer avionics as a stop-gap measure. The S-2 left active US Navy service in 1973-74 as the S-3A became available.

Following military service, the Tracker took on a new job as a fire-fighting aircraft, replacing the aging Grumman TBM and Douglas B-26 in such service. Its excellent low altitude performance and maneuverability allows the airplane to operate safely over difficult terrain. Many have been upgraded over the years with more powerful turboprop engines; this upgrade was also adopted by several of the smaller air forces that continued to operate the Tracker.

The S-2A was released in 1/72 scale by Hasegawa in the 1970s, and has been available since. This S-2E is the first injection-molded kit of the later Tracker, and the only one in 1/48 scale. The kit provides the option of assembly with wings folded or extended, underwing ordnance and two torpedoes for the bomb bay, a cockpit that is “detailed enough” for what the viewer can see when completed. Decals are provided for one airplane, an S-2E flown by VS-37 aboard USS Ticonderoga in 1971.

Construction is straightforward, but there are things I would do differently if I were to build a second one, based on what I know now. First, the molding of the wings and tail are such that the extreme trailing edge is molded with the upper half of the wings and horizontal stabilizers, and with the right fuselage half. The molding of the part that fits to that is not as good as it could be in each case. You should sand down the inner side of the mating part, to insure a smooth fit without a “ridge” because if you don’t you will have a lot of putty to apply and sand down, with concomitant loss of detail. But thinning the edge before assembly will avoid this.

The other problem is insuring nose sit. Most of the kit is behind the main gear. On the real airplane, most of the weight, engines, cockpit, bomb bay ordnance, etc., is ahead of the gear and so nose sitting is not a problem. I stuffed squashed fish weights in every nook and cranny: behind the instrument panel, under the cockpit floor to either side of the nose gear bay, and it wasn’t enough. I ended up having to pry off the engines and cowling from each nacelle and fill the area ahead of the main gear wells with heavier weights. And even then with all of that, the sit is problematic because that weight isn’t far enough ahead of main gear to be really effective. You should fill the area immediately behind the cockpit bulkhead with heavier weights, in addition to all the cramming into the nose. You can’t see anything in there through the windows, so don’t worry. Paint the interior black and all is well. Putting the weight as far forward as possible is necessary to insure proper sit. And even then, after you have put in twice as much weight as necessary, do not attach the engines and cowlings to the nacelles until you have the rest of the model assembled, with the gear in the wells, so you can check the balance. It will be likely you’ll need a few more weights in the front of the nacelles.

You need more weight than you think because of the position of the wings if you fold them, since they go fore and aft of the center point of the main gear and will mess up your weight and balance. So be sure before you close up those nacelles that you have fitted the wings in the position you want them in, to check the balance. Another solution is to get Terry Dean’s weight, which is molded to fit around the nose well and aft of the cockpit and provides more than sufficient weight.

Don’t worry about the gear. It is plastic, but it is molded strong enough that I do not foresee it collapsing any time soon. If you’re really worried, get metal gear from Scale Aircraft Conversions, but I don’t think it’s really necessary.

If you are going to build the model with the wings folded, be sure to check the fit of the hinge parts, that they can slide into the holes right with a minimum of fuss BEFORE you glue in the end plate to the inner wing. It is far easier to get that right at this early point than it is to try and get it to work right with the model assembled. (Ask me how I know)

The bomb bay doesn’t have a lot of detail. If you are going to assemble it closed, glue the bomb bay doors in position before you glue the fuselage together, so you can work on getting them in the right position from both inside and outside while they are setting up. Putting a piece of evergreen strip inside the bay door centerline is a good idea to get proper fit.

Do not put the antennas and other little fiddly bits on until after you have painted and decaled the model. The one exception is the large blade antenna on the lower fuselage. I scratched a “groove” in the proper position with an X-acto, which will give a better attachment than just butt-fitting it as is the original design.

If you do all that at the assembly points where it’s easy, the kit presents no problems. I did find that I wanted a nice solid attachment of the wing braces on top of the fuselage, a strong attachment both to the fuselage and the wing, to get a solid assembly. 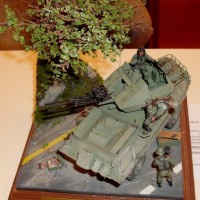 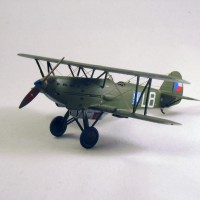 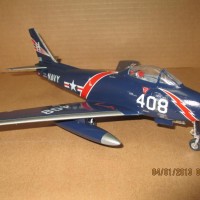 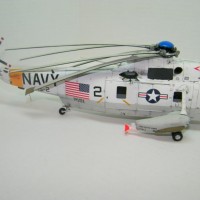