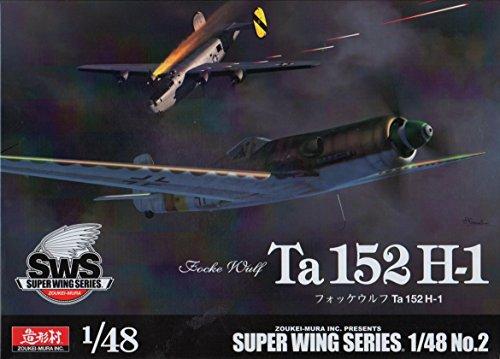 Five years ago, Zoukei-Mura released their 1/32 Focke-Wulf Ta-152H-1. It received some degree of critical acclaim, the majority of which was positive. Any modeler who built it, however, realized it was not perfect. Numerous fit issues due to the over-engineered “anatomy lesson” assembly sequence, soft and sometimes clunky detail, and suboptimal decals were the main issues. Sure, it built into a lovely representation of the iconic high-altitude interceptor, but for a state-of-the-art kit, it was difficult at best.

Two months ago, they released the much-anticipated 1/48 version of the production variant of this fighter. The kit comes in a smallish, top-opening box adorned with art depicting a downed B-24 plummeting to Earth behind a Ta-152. Six individually-bagged sprues molded in gray (one clear), bagged decals, and the instruction manual fill the box. Happily, the silver plastic from the original kit are non-existent here.

Upon examination of the sprues, it’s clear that the parts breakdown is highly similar to the original, 1/32 ZM Ta-152H-1. Not exact, mind you-there are a few subtle differences-but, very similar. 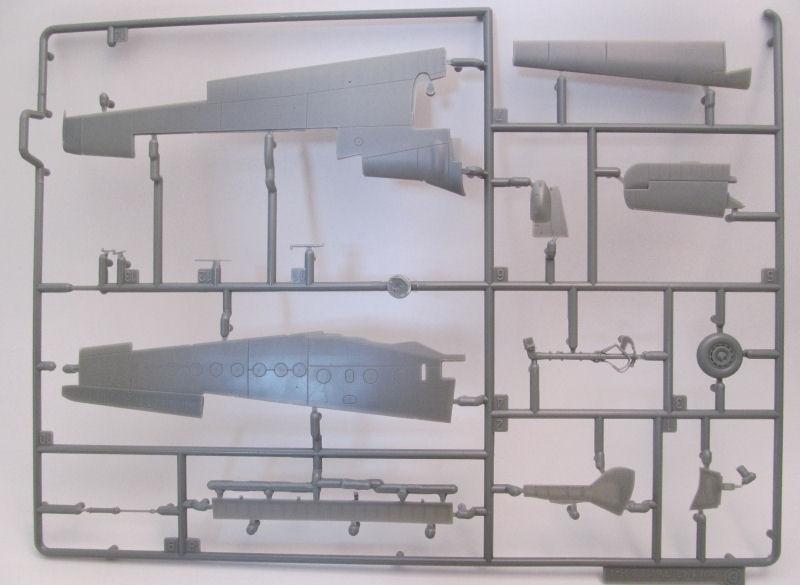 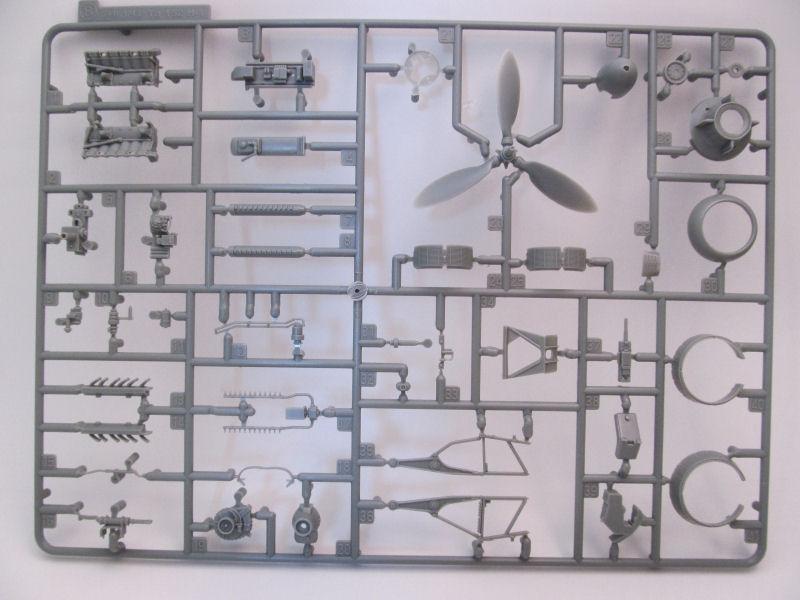 One pilot seat, without molded-on harnesses is provided. The 1/32 kit had options for both. This may be an issue for those who would like them molded on, but is essentially a non-issue otherwise. Some PE harness belts will dress it up nicely. Also, the large kit had posable ailerons, flaps, and elevators. Here, in 1/48, the flaps are posable but the rest are molded in place.

The wings have a modular assembly sequence like its big brother, as does the fuselage. The biggest improvement ZM could have made here would’ve been to mold the fuselage halves as one piece, but they opted not to. Curious…. 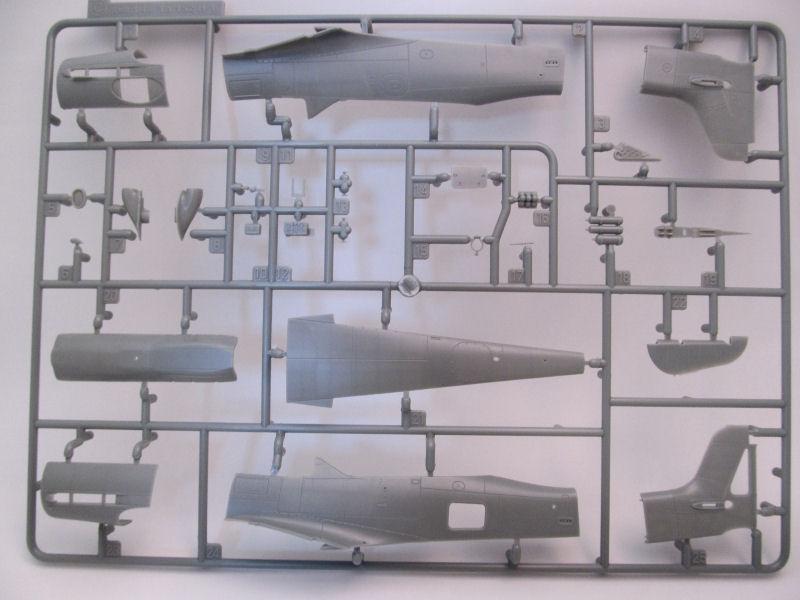 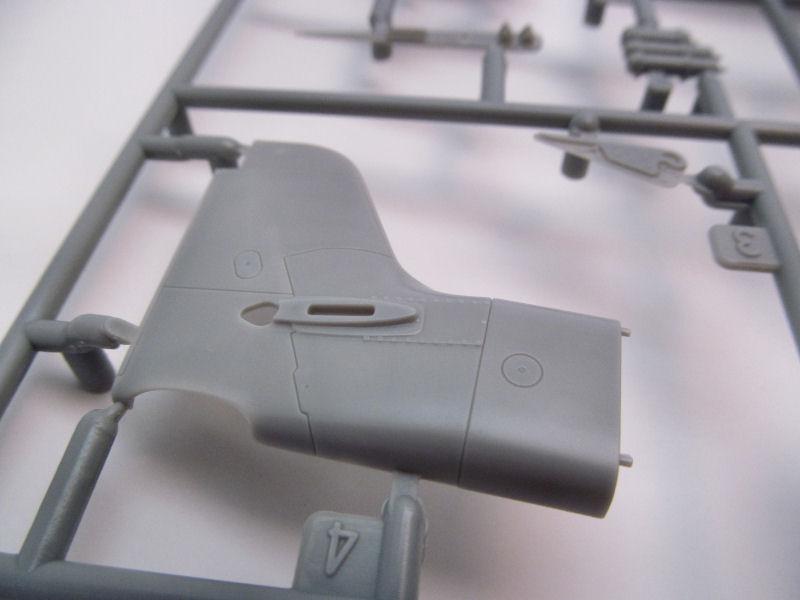 When I build this kit, I will attempt to avoid the pitfalls associated with the tail plug by cementing the port fuselage and tail halves together, then the starboard ones-then assembling the two complete halves together like a traditional aircraft model. Having struggled with the 1/32 kit in this manner by following the instructions, and assembling the plug separately, I think it will be a better experience without the fit problems. Only time will tell.

The internal fuselage walls are detailed with ribbing, but there are numerous sink marks that will need to be addressed should the ace panels be modeled open. Radio components and oxygen bottles are details that can be seen should the modeler opt to leave the panels open. 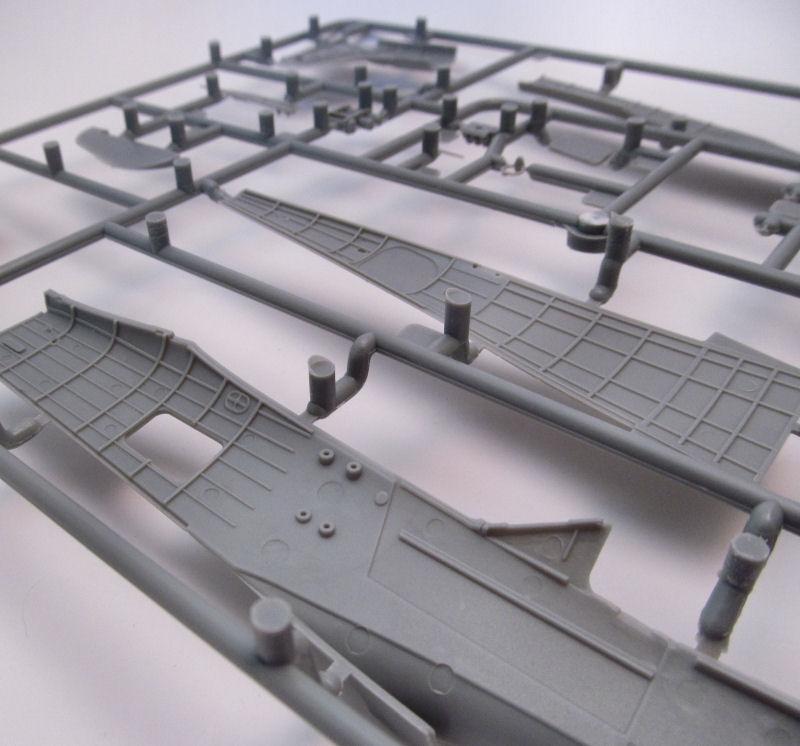 The Jumo213E motor is very highly detailed here, including separate ignition harnesses, radiator, and exhaust stacks. The model can be built with the engine posed open or closed. The forward cowling piece, which seemed a bit flattened in the 1/32 kit, seems to have been tweaked. It is clearly rounded slightly where it should be, and gone are the external sink marks that were present five years ago.

The landing gear is very nicely-detailed as well, including delicate hydraulics cables. The attachment method to the wheel wells is a bit complicated, and involves twisting and turning the entire gear leg to seat it properly. Care must be taken here to avoid disaster.

The cockpit is, again, highly detailed. I feel like the instrument bezels are out of scale, but the details here are more refined and less clunky than the 1/32 cockpit. Numerous raised details in the cockpit will respond well to paint and drybrushing. The cockpit sidewalls, however, suffer from a few ejector-pin marks that will require clean-up. The windscreen and canopy is crystal clear. The clear sprue is wrapped in packing foam to prevent shipping damage.

The wings, as mentioned above, are a two-piece modular affair. Careful fitting will be on order here before cementing. The undersides have spar detail in the landing flap area. Again, a few pin marks are noted. Surface detail is restrained, with panel lines and rivets that appear appropriate. It is of note that the wing-root fairings, a fit issue in 1/32, are molded integral to the fuselage. The main wing spar is nicely detailed, as well, and will provide structural integrity. 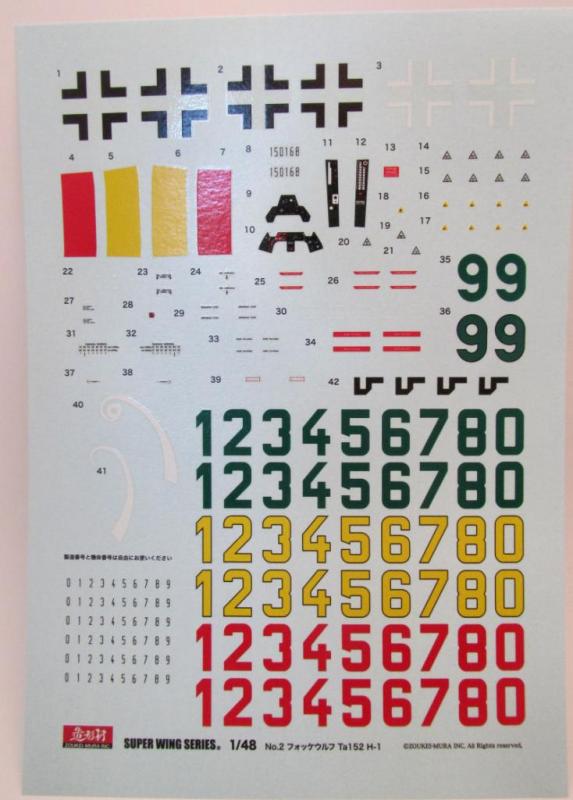 The decal sheet provides markings for numerous generic aircraft. The decals are in perfect register. The colors seem a bit bright to my eye, but should look fine under some weathering and a dull coat. Decals are provided for the instrument panel and side panel controls-I can’t yet comment on how they perform. The instructions are laid out in a CAD-style drawing style. The instructions appear to be clear and straightforward. Color callouts are for Vallejo Model Air and Model Color.

• Highly detailed.
• Details are more subtly rendered in 1/48, compared to the larger-scale version of this kit.
• Restrained rivet/panel line detail.
• Decals provide wurknummers for numerous aircraft.
• Decals provide individual aircraft assignment numbers in red, yellow, and green.
• Landing flaps can be posed deployed or retracted.
• Gone are the sprues molded in silver plastic.
• Option of open or closed cowling flaps.
• One pilot seat without molded-on seat harness.
• Wing-root fairings, a fit issue in 1/32, are molded integral to the fuselage.

My sincere thanks to iModeler for the review sample. 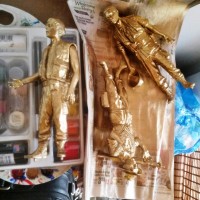 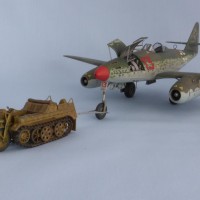 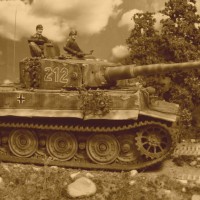 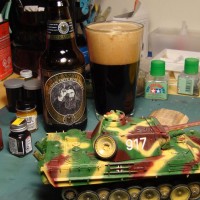 Alchemy, the dark arts and the Hairy Eyeball…….