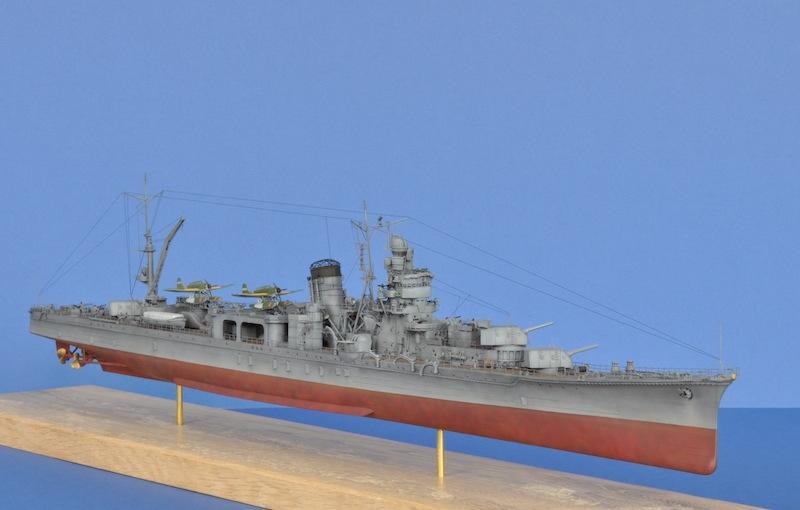 The Yahagi was one of four Agano-class cruisers. They were designed to be torpedo squadron leaders which explains their strong torpedo armament and their relatively weak artillery. The Yahagi was launched on the 25 October 1942 and had a very active career that ended with her being sunk on the 7 April 1945 while escorting the Yamato on the last mission of the Imperial japanese navy. There is a good article about her on the Wikipedia in english.

Hasegawas kit is one of the best kits I’ve built, with excellent fit and great detail. Hasegawa also issues three PE sets to go with her, of which I used two. They are very good but somewhat fragile. I’m quite used to working with PE but I still managed to deform some of the PE parts just by cutting them off the sheets. Apart from adding PE, I also scratchbuilt parts of the masts using piano wire.

Yahagis decks were covered with linoleum mats and to make the decks come alive I masked and painted them in several nuances of reddish brown. The contrasts between the mats turned out to be a bit to strong, so I toned them down with a thin mist of light red brown.

To make the underwater hull come alive, I first sprayed the bottom of the hull in a chaotic green and brown pattern, over which I then sprayed a thin layer of red. Then I used a cardboard template to create vertical green streaks of algae, after which I used another template to create a miscolouring along the waterline.

Pictures of ships serving in the Pacific theatre of war show that they were very heavily bleached. I tried to recreate that by first spraying the ship with an IJN grey of my own mix, onto which I then sprayed ever more bleached grey tones

There was quite a bit of PE work involved, not the least on the 25 mm AA guns, of which there were quite a few… Threading all of the PE cable reels with sewing thread, was also a bit of a challenge.

The kits aircraft are excellent, with separate clear parts for the canopies. Why can’t the other manufacturers do that. 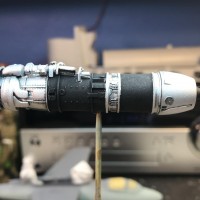 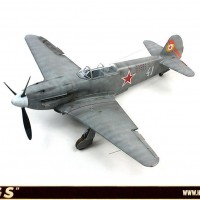 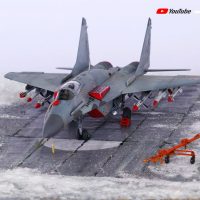