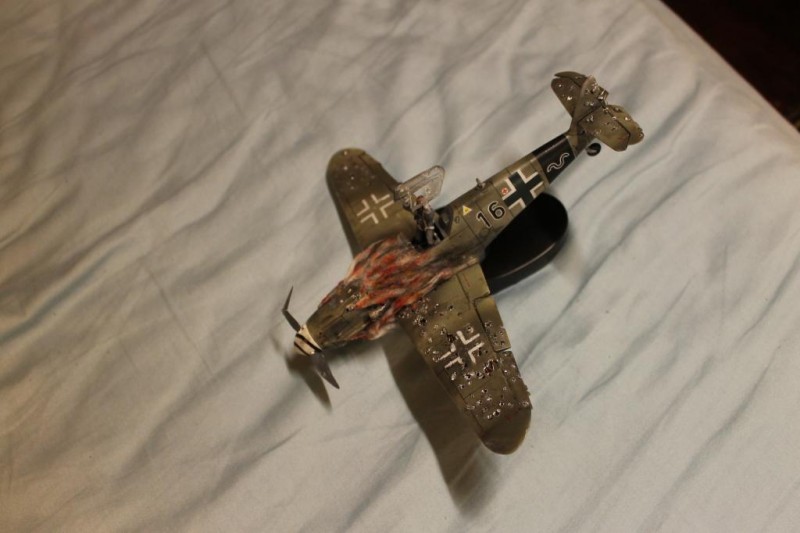 So I mentioned that I was building a Bf 109 and here it is. This is Revell Germany’s Bf 109 K4. From the beginning of the kit I knew I wanted to have the plane all shot up and the pilot bailing out. I got the general I idea from Jack Mugan but added some of my own stuff. So I first thinned out the plastic and drilled holes which I then enlarged with a hobby knife. The detail was simple and I decided to leave it the way it was except for making seat belts from foil. I fit all the components together and gave the plane a paint job and then got to the task of making all the realistic adjustments. I first put on the decals, they were alright after they dried the edges silvered and I had to put down more future than usual. Then the whole plane got a black wash and I picked out the silver details with a brush. The smoke and fire is cotton pulled from cotton swabs and glued and painted. I originally was going to have the rudder hanging by its “last wires” but it mysteriously went missing, so I substituted with frayed wire ends where the rudder would have been. Also the front canopy went missing and I had to scratch build that. I doesn’t look that good but it still is better than none. Then for the final touch, the pilot. I went to my figures box and there were no people that looked anything close to what I wanted. So I took a sitting figure, cut his legs off. Cut off his arms, so I just had a torso and a head, then stuck the legs on to make him look like he was standing and make all the joints flush with super glue. Now I had a body. I then made a parachute from putty and all his harnesses are wine foil and I then painted him up and stuck him on with the canopy still in his hands, from pushing it up. Then I rooted through my stash till I found a stand that would work. Hope you like it! 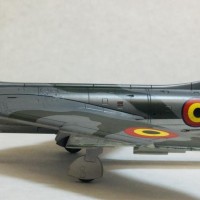 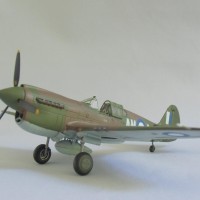 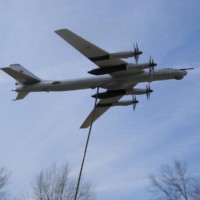