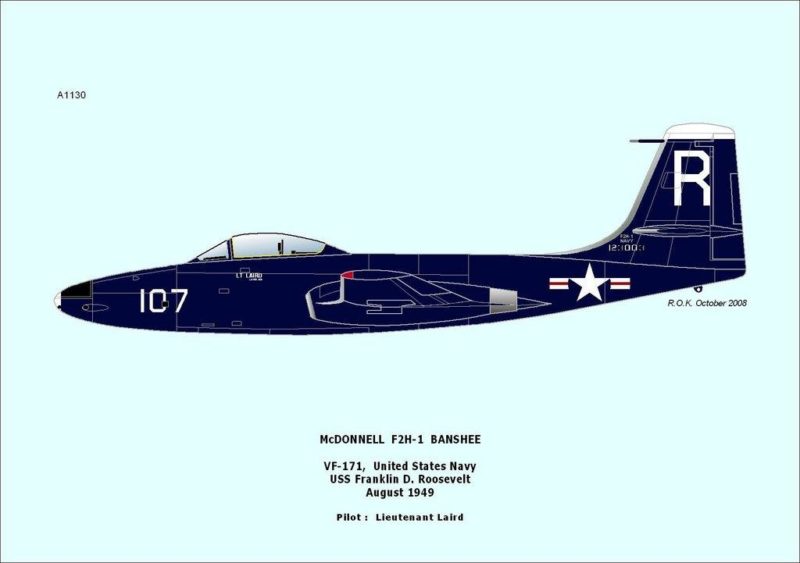 Following the recent release of a new 1/48 F2H-2 Banshee from Kitty Hawk, let’s have a look at some of the markings and history of this aircraft.

In late 1944, US Navy ordered three carrier-based jet fighters, the Vought XF6U-1 Pirate, the McDonnell XFD-1 Phantom, and the North American XFJ-1 Fury. It was hoped that these three fighters would be available in time for *Operation Olympic/Coronet*, the invasion of Japan which was planned for May of 1946.

As it was, the prototype The first XF2H-1 made its maiden flight in January 1947. Too late to take part in World War II, it arrived in time to become one of the primary American fighters used during the Korean War.

56 production F2H-1s were delivered between August 1948 and August 1949. They were identical to the prototype except for the elimination of the tailplane dihedral. The first operational unit to receive the Banshee was VF-171 based at NAS Cecil Field in Florida.

The service life of the F2H-1 was relatively brief. F2H-1s were soon transferred to Reserve units as the more capable F2H-2 became available. A total of 364 units were built, the first being delivered in the winter of 1949 and the last in May of 1952.

There were three variants on the basic F2H-2 theme–the F2H-2B, the F2H-2P, and the F2H-2N. These were produced in parallel with the basic F2H-2. The F2H-2B was a nuclear strike version of the F2H-2 with some strengthened wings so that the aircraft could carry a 1650-lb Mk 7 or a 3230 lb Mk 8 nuclear bomb underneath the port wing.

The F2H-2P was an unarmed photo reconnaissance version, with a widened and longer nose to provide space for six vertical and oblique cameras. For night photography, a container for 20 flash cartridges could be carried underneath each wing. A total of 89 F2H-2Ps were built.

The F2H-2N was the single-seat night-fighter. It too had a longer but differently shaped nose which housed an AN/APS-19 radar set. Only a small batch was produced, 14 machines in total.

All profiles included in this article have been contributed by Mr Rick Kent. Used by permission 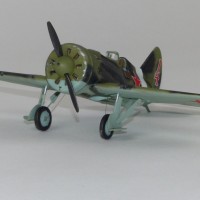 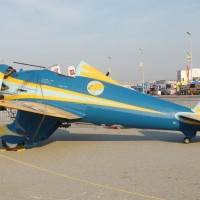 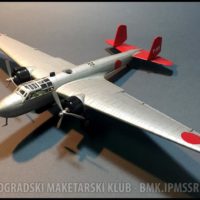