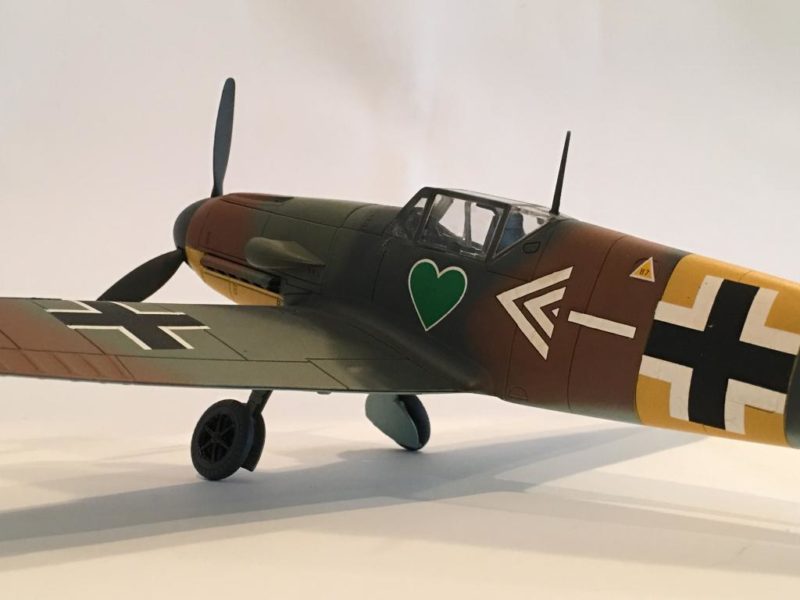 Here are some pictures of a model that I built several years ago. I have always liked the different colors that were used by JG 54 on the Eastern Front. I had some left over decals for some 1/32nd scale Bf-109’s, and was able to piece together enough to complete this model. As luck would have it, shortly after I finished my model, I found a very good photo of the man standing beside his machine. The markings are very similar but it looks like the camouflage is a little different (as are probably the colors too).

Hannes Trautloft flew Heinkel He-51 biplanes with the Legion Condor in Spain prior to WW2. He scored two victories, but was himself shot down on August 30th, 1936. He was the first German pilot to be shot down in this conflict. He escaped and continued flying combat missions.

Later during the Battle of Britain, Herman Goring relieved several Commanders of their duty because he wasn’t happy with the outcome of the fight. Then Goring promoted Trautloft to Major and placed him in command of JG54. He flew another 120 combat missions over England and gained a few more victories that brought his total to 13.

The unit was later transferred to the Eastern Front and began combat operations there. On December 4th, 1941 he ordered that all of JG54 aircraft would have the now famous “Green Heart” symbol applied to the sides of the fuselage. This was the same symbol he had on his personal plane during his time with the Legion Condor in Spain.

In November 1943, he was placed in overall charge of the Luftwaffe day fighters.

Late in 1944 he heard of a rumor that there were a large group of Allied airmen being held in Buchenwald Concentration Camp. He then visited the camp to confirm the rumor. While he was about to leave the camp when captured US airman (Bernard Scharf) called out to him in fluent German from behind a fence. The SS guards tried to intervene but Trautloft pointed out that he out-ranked them and made them stand back. Scharf explained that he was one of more than 160 allied airmen imprisoned at the camp and begged Trautloft to rescue him and the other airmen. Trautloft’s adjutant also spoke to the group’s commanding officer, Phil Lamason. Disturbed by the event, Trautloft returned to Berlin and began the process to have the airmen transferred out of Buchenwald. Seven days before their scheduled execution, the airmen were taken by train by the Luftwaffe to Stalag Luft III.

This information in my last paragraph was taken directly from Wikipedia.

In early 1945 he was involved in the “Fighter Pilot’s Revolt” where a number of pilots spoke out against how the precious fighters and other resources were being used in operations like Bodenplate. This got him relieved of his position and he was reassigned to a Luftwaffe training school where he spent the rest of the war.

Trautloft survived the war and later became a General in the new Bundesluftwaffe. He rose to the rank of Generalleutnant. He retired in 1970.

I’m not a professed 109 Guru, so I’m not even 100 percent sure this is a model of a late “Friedrich” or an early “Gustav”. It was an inexpensive kit and a quick fun build. There are not too many parts with this one. It did require a little filler. In the end it looks like a 109 to me and was a nice canvas to display a theoretical JG 54 “Grunherz” camouflage pattern. I included a picture of another one I bought as the last photo. I can recommend this kit to anyone, beginners as well.

JG 54 used a variety of paint colors. I have included a rare color picture that was described as a FW-190 from JG54. It is the second to last picture. You can see the brown shades and various greens that were used too. 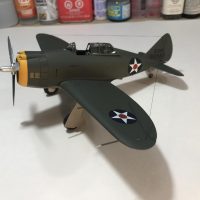 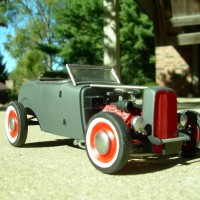 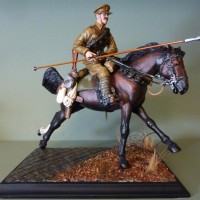 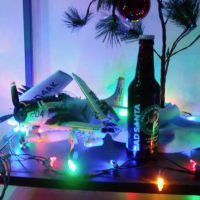 There’s a Spad under the tree!