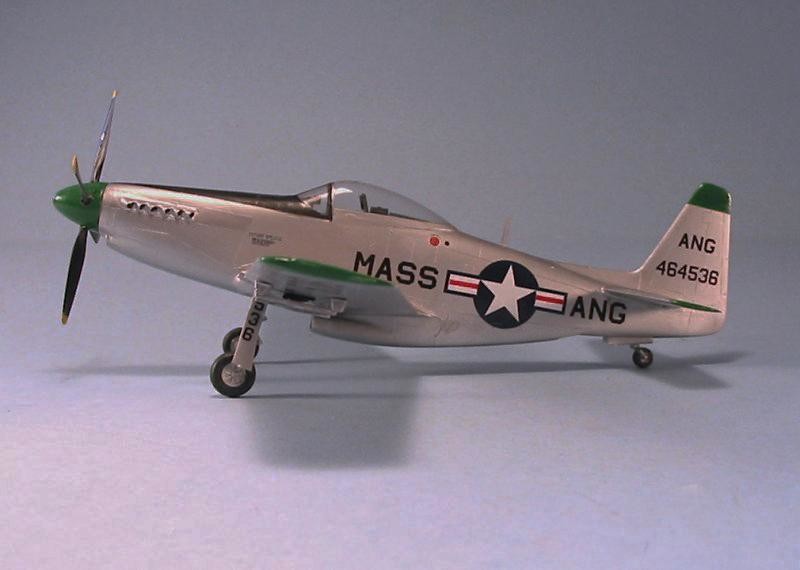 The original Allison-powered Mustang was a lightweight fighter with excellent handling capability. Pilots I know who have had the opportunity to fly these early Mustangs and compare them with the later Merlin-powered P-51B and P-51D uniformly agree that the early Mustang flies better. With the addition of more armor, more armament and more fuel – even with a more powerful engine – the Mustang gave a much heavier feel, which did affect its maneuverability.

North American was aware of this during the aircraft’s original wartime development, and put considerable effort into trying to come up with a lightweight Mustang that gave the maneuverability of the earlier models with the altitude performance and range of the later models. The XP-51F and XP-51G were the result. Using the same Merlin V-1650-7 engine as the P-51D, the loaded weight of the airplane was reduced to 9,060 pounds – as compared to a loaded weight of 10,100 pounds for the P-51D. This was accomplished through simplification of the structure, the deletion of some equipment, and the use of new materials such as plastics, while aerodynamics were improved with a longer bubble canopy. The net result was a savings of 2,000 pounds and a top speed of 466 mph. The XP-51G was fitted with the Merlin 145 engine and achieved a top of 472 mph.

Development of the lightweight Mustang resulted in the P-51H, which entered production towards the end of 1944. Equipped with a Packard-Merlin V-1650-9 delivering a maximum 2,218 horsepower (as opposed to the maximum 1,695 horsepower of the P-51D), the maximum range of 1,000 miles on internal fuel could be extended to 1,500 miles with two 75-gallon drop tanks. The P-51H had a shorter “bubble” canopy than the XP-51F/G, and a full 6-gun armament, the overload weight of 10,500 pounds was only a few hundred less than the P-51D. Nevertheless, it was the fastest production P-51, with a top speed of 487 mph. 1,445 P-51Hs were ordered in January 1945, but the end of the war in August brought production to a halt with a total of 555 aircraft.

The P-51H, along with the P-47N, equipped the postwar Air National Guard as jets replaced propeller-driven fighters in the U.S. Air Force. The V-1650-9 Merlin – which was close to being a “race” engine similar to the bored-out engines that power P-51Ds in air races to this day was as temperamental as those engines, which resulted in units equipped with the P-51H seldom experiencing more than 50% availability. This more than anything else was responsible for the P-51H not being called to active duty during the Korean War.

By the 1970s, only two P-51Hs were left in flyable condition. One of these was owned by Mike Coutches of Oakland, California, and was regularly flown at west coast air shows. The other was eventually purchased by the two biggest morons to ever participate in American aviation: Bill and Don Whittington, heirs to the largrest RV dealership in the southeastern United States. They were eventually arrested by the DEA for attempting to form a drug-smuggling “air force” for the Colombina FARC and each one did some time in the Federal sneezer in Marion, Illinois in the mid-1980s.

The continued existence of these two is the best argument against inherited wealth I know of, and is proof there is no connection whatsoever between the brain and the billfold. Together, these two incompetents were responsible in the late 1970s and early 1980s for more otherwise-avoidable losses of warbirds and unlimited racers than the rest of the community combined, and in each case the fault for the loss could be laid to obvious pilot error. In 1981, I watched one of these two i****s (I forget which) blow the engine of their P-51H and then, through failure to trade airspeed for altitude that would have given him time and distance to make the field for a deadstick landing, instead land the airplane too fast wheels-up in the desert, turning it into immediate scrap. There are those who say the airplane – which is still in some hangar in Florida – may yet be rebuilt by some multi-millionaire like Kermit Weeks, but as of the last time I heard of it, it was still moldering away. When these two weren’t wrecking warbirds through incompetence, they managed to get themselves thrown out of Indy Car racing for their amazing ability to wreck expensive racers through stupid moves.

The Classic Airframes P-51H was one of two 1/48 P-51H kits released in 1999, the other being released by HiPM, a company whose products are so bad I have almost managed to put their name completely out of my mind, of which their P-51H was the worst of a line of awful kits that finally resulted in them going out of business. The only thing I can recall of that kit was that it only vaguely resembled a P-51H, and was one of the few plastic kits I have ever built that not only was thrown against a wall but was stomped into its component atoms. Fortunately, I did keep the decal sheet, the one good thing in the box, which was put to use with this project several years later.

The Classic Airframes P-51H was really not much better, though it was at least dimensionally accurate. It comes from the days when people used to use “Classic Airframes” as sort of a swear word, due to kits that were frequently more than a bit “challenging.” It was an MPM product from the days when that company’s kit design philosophy was “Fit? Fit?! We don’t need no steenking fit, steenking Yanqui!”

Their P-51H is still the only 1/48 kit of this airplane available, if you can find it on a dealer’s table at a model show. I built one when it first came out, done in the kit markings as Experimental Aircraft Foundation founder Paul Poberezny’s Wisconsin ANG airplane, which is now on display out at Planes of Fame Air Museum. I forget where I got this second kit, but it sat in the stash untouched for several years until I obtained the Falcon Vacuform set “Mustang Special”, which includes an accurate P-51H canopy made for the kit.

Break out the Bondo and the Mr. Surfacer before opening this kit, and be sure you have fresh sanding sticks, because you are going to use everything to get to the finish line.

First, I sawed the parts off the sprues and spent a good bit of time cleaning them up and getting rid of the flash.

I first assembled the wing, gluing the main wheel doors closed, since these are only open on a P-51H when the gear is operating up and down. I applied putty to the door area and sanded it smooth, then rescribed the outline of the doors.

I took a sanding stick and sanded the too-thick dorsal fin to about half thickness – working on it from the centerline and the external surface – since the dorsal fin on a P-51H is very thin. I also sanded along the centerline of the fuselage to narrow it a bit so it would fit to the wing subassembly eventually without destroying the dihedral, and so the vertical fin would be thin with a sharp trailing edge.

I then assembled the fuselage, and then attached the wing sub-assembly. Putty was required on all joints, with a lot of sanding to get things smooth, followed by Mr. Surfacer 500 to get finally rid of the seams. I then polished the model and rescribed all the panel lines. With the horizontal stabilizers attached, and the vacuform canopy in position with its seam filled, the model was ready to paint. Having the canopy closed allowed to model to show the lines of the P-51H, while the Falcon canopy was clear enough once Futrued to allow most of the detail in the cockpit (which I am not convinced was all that accurate) to be seen.

While the P-51H originally entered service in a natural metal finish, when it went to the Air National Guard it was one of the first airplanes to be painted overall with aluminum lacquer for anti-corrosion protection. I first painted the model with the black anti-glare area and the Kelly-Green squadron colors, then applied SNJ Aluminum with a coat of Model Master Sealer, which makes the aluminum paint look like paint rather than metal.

I used the kit decals for the national insignia, and the decals from the HiPM kit to do a Mustang of the Massachusetts Air National Guard.

I used the bomb rack and rocket rails from a Hasegawa P-51D kit. I had already sanded down the too-thick prop blades, and attached them to the prop spinner.

If you’re a Mustang fan and want the last P-51 in your collection, the Classic Airframes kit is the only game in town (unless you are really nuts and willing to shell out well over $100 for the Collectaire kit on eBay, which is not that much better), if you can get it. It definitely is a kit where “some modeling skill required” is the minimum. A vacuform would likely be easier, and if you’re waiting for a “state of the art” kit of this rare Mustang, don’t hold your breath or you’ll turn blue and die. Another one is unlikely, but I never say “never.” Trumpeter might yet surprise us. 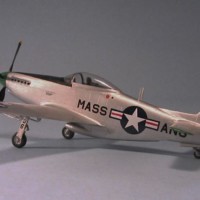 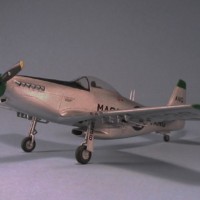 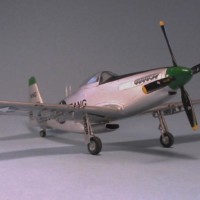 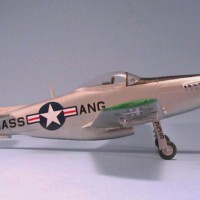 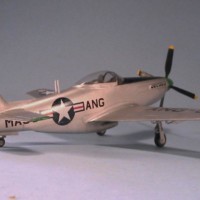 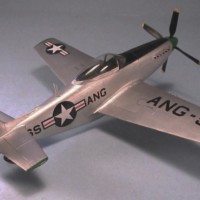 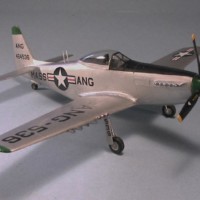 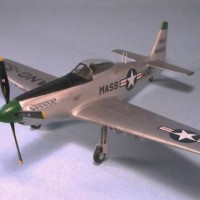 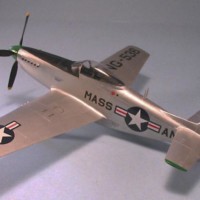 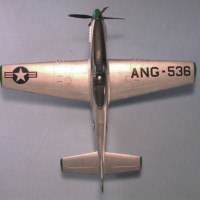 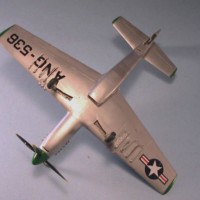 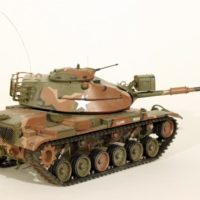 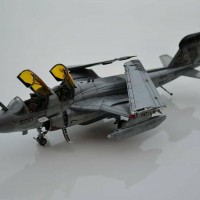 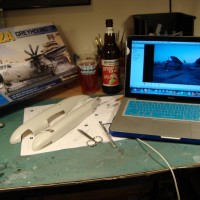 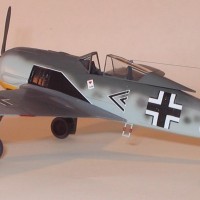