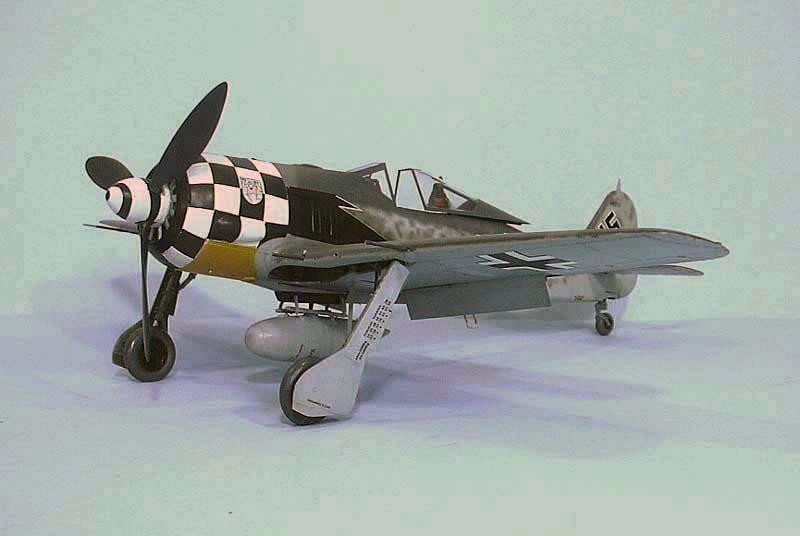 The Fw-190A-6 was the last version of the “mid-range” Fw-190A series. As with the A-2, A-3, A-4 and A-5 sub-types, it had two 7.62mm machine guns mounted in the fuselage, for primary use as “sighting weapons.” Unlike the earlier versions, it dropped the outer-wing 20mm MG-FF drum-fed cannon – which had presented problems from the outset with its slower rate of fire and differing range and trajectory from the excellent 20mm MG 151 mounted in the wing roots – and provided an all-MG 151 armament. Still comparatively light weight, the Fw-190A-6 was the “last of the dog fighters,” and would be used on the Eastern Front in the air superiority role till the end of the war.

However, the main use of the Fw-190A-6 – and the reason for its existence with its heavy armament – was on the Western Front, where the USAAF’s 8th Air Force was gathering strength and reaching out across Western Europe and into Germany in the spring and summer of 1943 when the A-6 made its appearance.

While the Fw-190A was always the German fighter with the best armament for opposing heavy bombers, it was at a disadvantage against the Americans, since the Wurger’s best altitude performance was at approximately 23,000 feet, and the American bombers were coming in at 25,000-27,000 feet. Thus, by the time the Fw-190-equipped units struggled up to 28,000 to 29,000 feet to make their famous “twelve o’clock high” head-on attacks against the bombers, they were at a serious disadvantage if they ran across any opposing P-47s – which would be operating at their best height at that altitude.

Thus, the JagdGeschwadern opposing the Americans – JG 2 over the Cotentin Peninsula in western France, JG 26 in northern France and southern Belgium, and JG 1 in northern Belgium and Holland – were forced in the spring of 1943 to change from being solely equipped with Fw-190s in all Gruppen to having two Gruppen on the Fw-190 and the third flying the Bf-109G-2 and later Bf-109G-4, which could fly and fight at altitudes above 30,000 feet. The responsibility of the 109s was to cover the 190s and keep the fighters away while the 190s concentrated on the bombers. Unfortunately, the Germans were about as successful with this tactic as the RAF had been assigning Spitfires to cover Hurricanes and take on the Luftwaffe’s 109s while the Hurricanes took on the Heinkels and Dorniers during the Battle of Britain. As the summer of 1943 wore on and the P-47s of the 8th Air Force acquired the ability to reach out further from England to the west German border, the Fw-190s found themselves more and more frequently fighting off Thunderbolts while trying to set up for a “company front” attack on the bomber screen. It was in these early battles that the Luftwaffe began hemorrhaging the one commodity they couldn’t afford to lose: experienced pilots. Within six months of the first Schweinfurt mission in August 1943, the Jagdwaffe would be a shadow of its former self after fighting off the deep-penetration missions in February and March 1944.

But so long as the Americans lacked the ability to escort the bombers all the way to their distant targets and back, the Luftwaffe exacted such a toll on the bombers that a B-17 or B-24 crewman on his sixth mission was statistically flying another man’s time, since the life expectancy of a bomber crewman in 1943 was five missions – with 25 required to complete a tour. Anyone today who has ever been inside “9-0-9″ or “Aluminum Overcast” or “Sentimental Journey” or “All American” and seen how small they are, how vulnerable they are, can only come away with a sense of awe at the thought of facing a German fighter with four 20mm cannons, each capable of firing 600 rounds a minute, at a frigid 25,000 feet over Europe.

For the Germans, fighting the Americans was unlike anything they had done before on the Channel Front. Previously, the incoming formations were relatively small, and could be opposed by individual Staffeln. But going up against 200 or 300 heavy bombers, with their escorts, meant sending up units in full Gruppe strength, if not the entire Geschwader. Aerial recognition of friend and foe became as important for the Germans as it was for the Americans, since the Fw-190 and the P-47 looked so much alike at a distance. While the 8th Air Force was painting white recognition bands on the nose and tail of their P-47s, the German units were experimenting with markings that were even more obvious. Psychologically, the Germans in 1943 considered themselves to have the upper hand over the Americans (which was quite often the case) and so they could decide that more radical markings, more obvious markings, could be used since they were also a morale factor for everyone – German and American – involved. For I/JG 1 in the summer and fall of 1943, this resulted in what were probably the most spectacular markings carried by any German fighters in the war – a checker board on the cowlings – with the individual Staffeln in the Gruppe identified by different colors in the field – white for the 1st Staffel, yellow for the 2nd, and red for the 3rd – each with black checkers on the board. Additionally, many of the aircraft also carried their Staffel badge superimposed on the checker board. The result was that I Gruppe could easily identify each other, and psychologically the enemy knew who they were up against.

These markings lasted through the winter of 1943-44, while losses were comparatively low. In fact, after “Black Thursday,” the second Schweinfurt mission of October 14, 1943, when the Jagdwaffe brought down 60 of 290 American bombers and damaged another 100, 70 of them so badly they never flew after regaining their bases, the 8th Air Force was unable to mount an offensive mission. The Luftwaffe had won almost as decisively as had the RAF on September 15, 1940. The Americans were able to hide this defeat by the luck of the weather – the skies over Western Europe closed in the week following the Schweinfurt disaster and didn’t clear sufficiently for another deep-penetration mission until early December. By then the P-47s were carrying two drop tanks on underwing pylons and a third under the fuselage, there were now two long range P-38 units and the first P-51 unit was about to go operational. Within two months, the shoe was on the other foot.

With the losses in pilots and planes sustained in the missions of February and March 1944, the Germans no longer had the time to spend painting an airplane with elaborate markings, not to mention the Luftwaffe now needed to hide from their hunters. Bright markings became a thing of the past among the Jagdwaffe, with pilots even ceasing to paint victory markings on their rudders.

Over the years since Hasegawa first released their Fw-190 kits in 2003, they have released limited editions, some of different sub-types and some with different markings. This kit of the Fw-190A-6 is both. While Fw-190A-6s on the Eastern Front kept the early gear doors since they were not carrying drop tanks, those used on the Western Front were the first Fw-190s to regularly use centerline drop tanks, which meant they did not use the inner gear doors that covered the wheels. Thus, this mix-and-match kit has the gear doors and centerline drop tank and rack of the later Fw-190A-8, with the upper cowling and gun bay cover of the earlier Fw-190A-5 kit. The decals provide the black checkers, and markings for an airplane from each of the three Staffeln, with the modeler responsible for painting the cowling in the proper color. The sheet does not include individual Staffel insignia; however, I had the Cutting Edge He-162 sheet, which did have the different squadron badges for each unit in I Gruppe, and decided to go with the “Cloud Devil” insignia of 1st Staffel.

Since this is a kit from the days when Hasegawa’s kit decals had an “ivory” white color, I only used the kit decals for the checkers and the stencils. I used national insignia from an Eagle Editions sheet, as well as the white “4.” Everything went down easily, once I applied a final coat of Solvaset atop the Micro-Sol on the national insignias, which were thicker than I had originally thought.

These “special edition” kits came and went to fast when they were originally released that I never had the chance to get this one until I ran across the kit at the local hobby shop in the sale of the collection of a departed kit collector. Fortunately, I got to pay the original price of $42.95, making this a real bargain. This brightly-colored model looks very interesting next to the others. 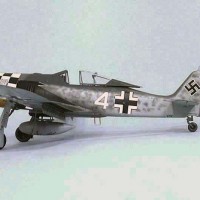 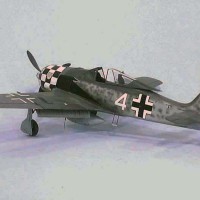 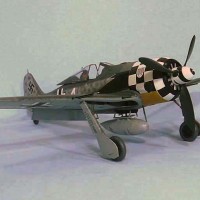 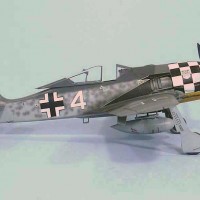 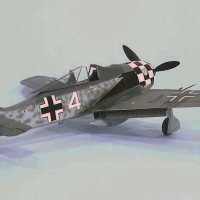 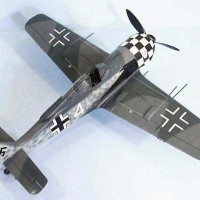 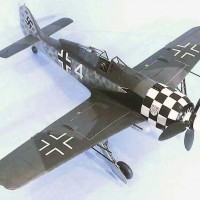 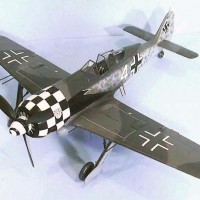 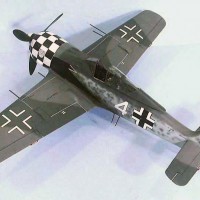 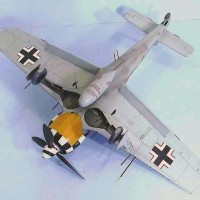 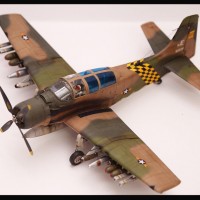 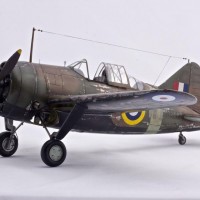 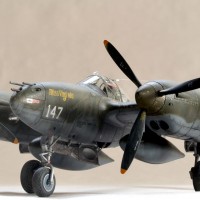 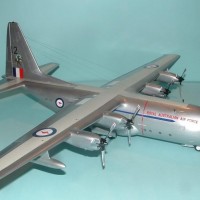