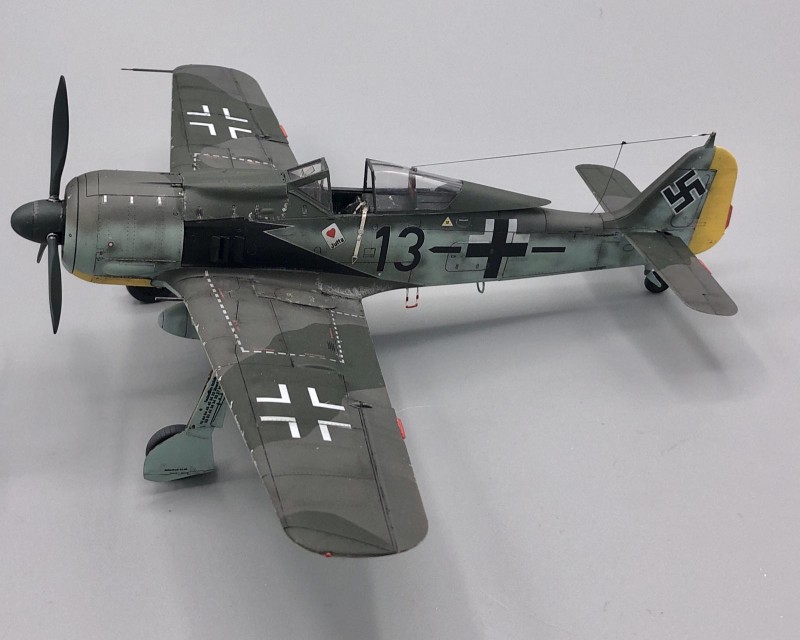 I first saw “The Longest Day” as a 14-year-old airplane nut when the movie first came out in 1962. The scene showing Pips Priller’s D-Day strafing run on SWORD Beach has stayed with me since. In honor of the 75th anniversary of the D-Day landing and Priller’s flight, I decided to build his historic airplane.

Tom Cleaver did a magnificent build of this same subject a couple of weeks ago using Eduard’s new mold Fw 190 A-8 kit. I would refer you to his post here on iModeler to see his work and read his exceptional (as usual) write up on the development of the FW 190 and a detailed description of Priller and his flight.

My build began life as the 1/48 Eduard old mold Fw 190 A-8 Weekend Kit. This is a very well-engineered kit for those that like to show the internal workings of an airplane. In this case you can build the kit with the engine, fuselage machine guns, and wing cannons exposed…or not. I am a pilot and look at an airplane as the sum of all its various parts and not individual systems. Because of this, I chose to do my build with all of the panels closed up and the plane ready for take-off on the early morning of 6 Jun.

The build began, as usual, with the cockpit. I made hefty use of Eduard’s PE for this kit. I modified the Revi gunsight by making the reflecting glass and sun filter out of .007-inch plastic sheeting. Next came the fun of building the fuselage forward of the cockpit. With this kit, you HAVE to build the firewall, motor mounts, and engine in order to install the cowling panels and cowling/oil cooler ring. Some internal parts that weren’t needed for this were omitted like the machine gun breeches. Likewise, I only painted those parts of the engine that would be seen behind the cooling fan. It took a bit of additional “plastic surgery” to make everything fit within the confines of the cowling. Of special note is that on the real airplane, the cooling fan sits right inside the cowling/oil cooler ring and not behind it like the old Monogram kit, so “cut and fit and repeat as needed” is a major part of the game. With patience, it will work, but that’s part of modeling. The next job was to close up the cannon bays in the wing roots, but this was a much easier task. I made the brake lines out of thin copper wire and the cannons and pitot tube out of hypodermic needles (I hate having them break off after I finish a build). For the cannons, I used 21 gauge needles inside 18 gauge needles to give the “stepped down” look. For the pitot tube I used 27 gauge inside 22 gauge. The rest of the build was pretty standard, otherwise.

I primed the model with white Stynlrez and painted the standard RLM 74/75/76 camo using Vallejo Air paints. I used the Peddinghaus 1/48 Priller decals because they were the only ones I could find online that had the markings for this airplane. I had two complaints about them, however. First, the decals are printed as one BIG decal on the backing paper. This required carefully cutting out each individual decal. Secondly, they were pretty thick and didn’t lay down into detail as nicely as I would have wished. This was, however, a blessing in disguise when I discovered that I had improperly located the “schwartz adlers” on the fuselage…after they had sat overnight following TWO applications of Micro Sol. I was able to “lift” them with Micro Set and put them in the right place without them tearing…pretty tough if you ask me. I next did some minor chipping and an oil panel line was to add some weathering. Once done, I gave it a final coat of satin varnish. This seems more to scale than matte, which to me looks more “dusty”. The radio antenna was made using my old standby…EZ-Line.

So that’s my tribute to the 75th anniversary of D-Day, Pips Priller, and his Fw 190…I hope you like it. 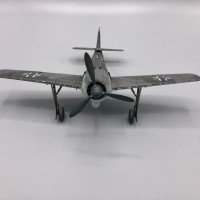 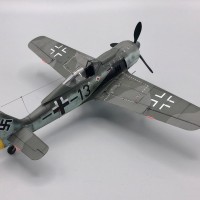 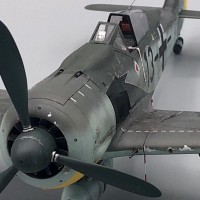 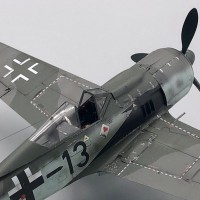 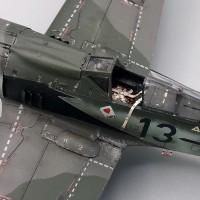 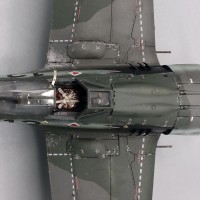 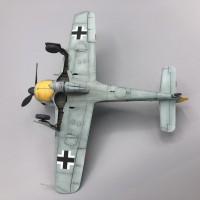 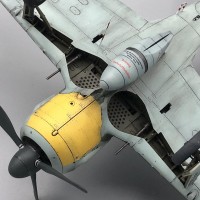 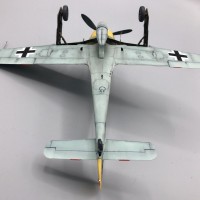 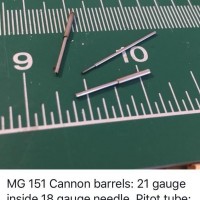 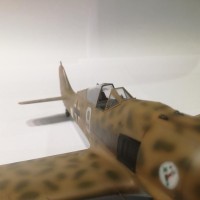 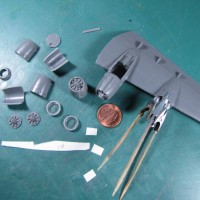