What inspires you to choose a kit or a scheme? For this model it was a post on this very forum that is a large reason.

My long term goal is to build a Corsair of every variant in 1/48, starting from the simple F4U-1 by Tamiya and ending in a scratchbuilt XF4U prototype when I have the skills developed. The F4U-2 is the last of the Tamiya Corsairs I had to check off my list. I started by looking at schemes and came across a very interesting colour profile where the nightfighter received matt black painted sides, I felt this would make a unique looking Corsair so immediately purchased the kit (which seems to be getting harder to find, and more expensive since Covid). Whilst the kit arrived I got to work on one of my favourite parts of modelling, research, in which I quickly learnt that the colour profile was inaccurate and wrong, but then I came across the brilliant article on this forum titled 'A Corsair for Bob' by David Hansen as well as the articles on Tailhook Topics about the F4U-2, both of which providing a plethora of useful information about the aircraft and it's history, as well as the unique paint scheme sported by this F4U-2 '10'.

Well, that settled it. A unique scheme, a huge wealth of information for a niche subject, time to get to work I thought.

As stated previously there really isn't anything more to add about Tamiya's Corsairs that I haven't already. This one received little aftermarket, just the elevators from Aires quickboost and the rest of the set went towards my Corsair Mk.II (note: remember to check the stash, as I already had one of these sets unopened. Doh, I guess it makes an excuse to build another one), it also received a pilot from PJ Models. These days I'm finding that resin pilots are becoming rarer and rarer to find which worries me as I like to normally build my models in flight, the reason I went for the resin pilot is that the Tamiya pilot looks very 'goofy' to put it lightly, somewhere between having too much to drink and having been involved in too many crashes. You may ask 'why does a night pilot have sunglasses?', well someone suggested to me that he is wearing sunglasses to keep his eyes adjusted to the dark during a sunset takeoff which works absolutely fine for me.

Painting this was a blast, I used MRP paints for the first time and bought a simple set of 4 paints. First up was Insignia White ANA601, I didn't like this at all, MRP comes pre-thinned and I found this to be slightly too thinned for my liking and the coverage was poor, so I substituted this for a most XF-1 mix which flowed better. For the light blue I MRPs Intermediate Blue ANA608 which sprayed wonderfully, I freehand painted the blue as the reference photos show in which it is extended lower down the fuselage than normal, and then I sprayed it high up the fuselage to a normal location for a Corsair. Next up was ANA607 Non-Specular Sea Blue which got sprayed on the fuselage like a standard tri-colour scheme would have. Now, fun fact for you all, the US Tri-colour scheme introduced in 1943 is actually technically 4 paints as there is two Sea Blues, one of which is Non-Specular ANA607 (matt) the other is a Semi-gloss ANA623. It's hard to see but is visible in particularly clean photos where there is a difference in colour of the two paints, whilst they were intended to be the same shade this naturally happened due to a difference chemical composition as well as the difference in light reflection. Also to make things more confusing the paint for ANA623 changed in 1947 to produce a more brighter and stronger paint that is seen on the Korean War birds largely because the WWII version wasn't as strong as expected. Back to WWII you'll notice that the semi-gloss paint was used on the wings, with the non-specular being used on the fuselage and sometimes the leading edge of the wing.

With this in mind I did two things, firstly I sprayed the wings in ANA623, I then went about and weathered the entire plane with tonal variations (more on that later). After the plane got a little bit more sunbleached than before, I followed up by painting the uniquely darkened down sides with ANA623 and made sure to NOT give this any tonal variation in order to make the appearance of nice, clean, freshly applied paint. This came out surprisingly well and shows how darker the freshly applied paint is compared to older paint and why that original author of the colour profile thought the sides to be black, thank you to David Hansen and the folks at TailhookTopics once again for solving this problem and proving it to be fresh sea blue paint, not black.

Aside from that I didn't bother doing much else, a few chips here and there were made into the X-11 base coat with a knife to show metal paint. The upper cowling panel was sprayed with AK Extreme Metal Aluminum to make it nice and shiny, and then decals straight from the Tamiya kit (plus some borrowed ones from their F4U-1D for the fuel tank) we're applied with the black 10 on the wheel doors being made from some other numbers included in the kit. Aboard USS Intrepid these 4 Corsairs of VF(N)-101 sported their squadron patch on their fuselage, but this was apparently removed when they moved aboard USS Enterprise.

Now I mentioned about tonal variation, prior to this I did what I thought was an okay job by doing a base shade, a lighter tone in the middle of most panels, and even lighter tone on a couple of panels, and then a dark tone on the panel lines. But what I did was do it subtle so it looked like it would make sense. Well with this particular Corsair I did everything to the extreme so much so it looked awful, but then I toned it back with the base colour over the top which in my opinion made a better looking tone for these older paint panels. On top of this, the model received an MRP semi-matt coat, but the specific areas on the side painted in ANA623 also got resprayed with MRP semi-gloss to give it a more shiny and darker effect.

With this done, my 5th Tamiya Corsair was done, and my 7th Corsair overall. On my trio build of the Corsair Mk.II, F4U-2, and F4U-4 this was the last one to complete, largely because the MRP paints whilst being incredibly good stink so much more than any other paint I've used. I'm in the UK, and for a good week we had some random snow and I really wasn't feeling like opening every window of the house to clear out the smell during snow.

Thanks again to David Hansen and the posts on Tailhook Topics which were incredibly helpful, but also intrumental in making me paint this interesting scheme rather than the one included in the kit. I'd also like thank all of you lovely folks on this forum for the great amount of support and kind words on my last post, it definitely means a lot. It's a good reminder to all of you that any of your posts may one day inspire another builder to work hard on their own creation. 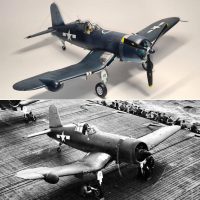 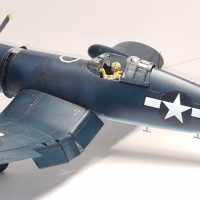 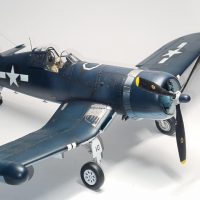 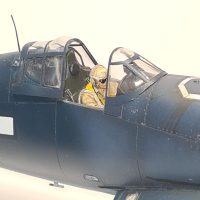 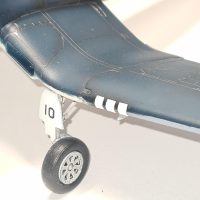 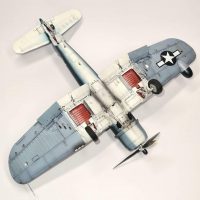 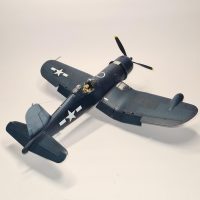 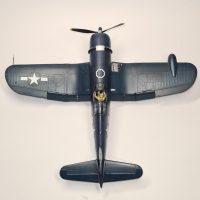 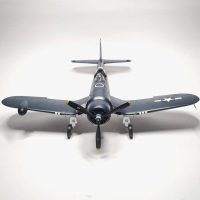 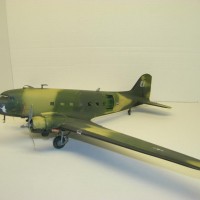 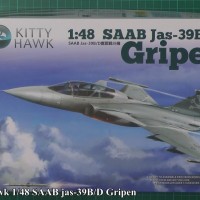 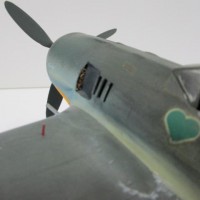