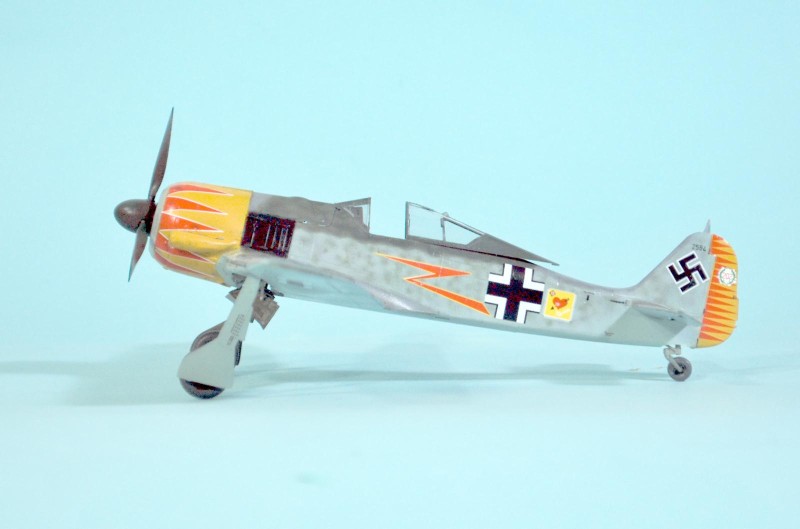 The Fw 190 A-5 was developed after it was determined that the Fw 190 could easily carry more ordnance. The D-2 engine was moved forward another 15 cm (6 in) as had been tried out earlier on the service test A-3/U1 aircraft, moving the center of gravity forward to allow more weight to be carried aft. Some A-5s were tested with the MW 50 installation: this was a mix of 50% methyl alcohol and 50% water, which could be injected into the engine to produce a short-term power boost to 2,000 PS (1,973 hp, 1,471 kW), but this system was not adopted for serial production. New radio gear, including FuG 25a Erstling IFF, and an electric artificial horizon found their way into the A-5. The A-5 retained the same basic armament as the A-4.

The Fw-190A-5/U7 used an Umrüst-Bausätze kit to install compressors and provide increased high-altitude performance; this was easily identified by the compressor air intakes on either side of the cowling. This was meant to solve the problem of the drop-off in performance above 23,000 feet. The adaptation was developed for Fw-190s that were used to intercept Mosquitos.

Oberst Hermann Graf was fascinated by aviation from his youth; he was only 12 when he made his first glider flight. While still in school, Graf earned his “A,” “B’”and “C” glider certificates. After graduation from school, he found work first as a locksmith apprentice, then as a public assistance clerk apprentice. He was good enough as a football goalie to be considered for professional status, but a broken thumb kept him from that career.

He joined the Wehrmacht in 1936, hoping to qualify for flight training. Initially classified for transport aviation in basic training, he impressed his instructors later and was put in the fighter course. After graduation in 1939, he took the the Luftwaffe NCO course and became a reserve officer candidate. He was assigned to the Aibling Fighter Wing in August 1939, which remained on the Western Front after the outbreak of hostilities, where he flew 21 missions without seeing action. After brief service in the spring and summer of 1940 as a flight instructor in Romania, he was transferred to 9 Staffel single shot being fired, then was transferred to the 9th Staffel, Jagdgeschwader 52 on October 6, 1940. The unit briefly participated in the Balkans campaign, and he flew in the Crete invasion.

JG 52, which had not been particularly successful during the Battle of Britain, finally found its calling on June 22, 1941, when the unit participated in the invasion of the USSR. Graf claimed his first victory, a, I-16, on August 4, 1941. He quickly “found his eye;” by January 24, 1942, he was awarded the Knight’s Cross for 41 victories. He was awarded the Oak Leaves on May 17, a score of 104, and the Swords on May 20. That fall, fighting over Stalingrad, he was credited with 62 Soviet fighters in 30 days, and was awarded the Diamonds for 172 victories on September 16. By mid-October, he had become the first fighter pilot to score 200 official victories, a feat accomplished in only 13 months of combat.

In January 1943, Graf was assigned as commander of Ergänzungs- Jagdgruppe Ost (Fighter Replacement Group East). In July 1943, Göring asked him to set up a special high-altitude fighter unit to intercept Mosquito light bombers. He was allowed to select any member he wished for the new Jagdgruppe 50, which would operate out of Wiesbaden-Erbenheim Airdrome. Graf chose close friend and wingman Alfred Grislawski, as well as Ernst Sass and Heinrich Fullgrabe, to form the “Karaya Quartet.”

While at Jagdgruppe Ost, Graf flew two Fw-190s, an A-4 and A-5. Each was modified with the U7 Umrüst-Bausätze kit to improve high altitude performance. They were extravagantly marked with red “tulip petals, and were frequently photographed since Graf was still an object of regime-directed public adulation.

Using his connections, Graf arranged for several drafted football players to be transferred to JGr.50 and formed his own soccer team, the Red Fighters, to raise morale. Later on, when he became a Soviet POW, his soccer prowess may even saved his life.

JGr.50 started out with eight Bf-109Gs rumored to be equipped with specially boosted engines. They were standard Bf-109G-5s and Bf-109G-6s that used GM1(nitrous oxide), to increase power. Graf set a world record of 46,885 feet in one of the modified 109s.

When JGr.50 was ready, its focus changed from hunting Mosquitoes to intercepting American heavy bombers. They were experimentally armed with the W.Gr.21 mortar rockets. On August 12, 1943, 183 Boeing B-17 Flying Fortresses were sent over Germany’s Ruhr industrial valley, and Graf’s men rallied to meet the threat.

On August 17, JGr.50 again intercepted American bombers flyuingthe Schjweinfurt-Regensburg missions. On September 6, unit pilots shot down four B-17s over Stuttgart, two claimed by Graf, who was shot down and survived a forced landing.

The following month, JGr.50 was merged with I Gruppe, JG.301. Graf was appointed Kommodore of JG 11 on November 1. Although much of his tiem was spent touring Luftwaffe units, he managed to shoot down three more bombers and a P-51 Mustang by March 8, 1944.

On March 29, after shooting down a Mustang, he was severely injured after ramming another in the fight and bailing out at low altitude. Göring reassigned him to command JG 52. He would complete his military tenure in that outfit.

By spring 1945 the war was all but over. When confronted by General George Patton’s Third Army, Graf surrendered what was left of JG 52. The Americans turned the POWs over to Soviet forces. It appeared Graf accepted his fate and because he cooperated with the Russians, he was labeled a traitor by the Germans.

In the early 1960s, Graf shared his POW experience with James Gniewkowski, who had married one of Graf’s relatives. Though he had no proof, Graf told Gniewkowski he believed that he had been traded by the Americans to the Russians in exchange for other imprisoned Germans. The Russians thought he was an engineer with significant aviation expertise.

He was held captive for four years after V-E Day — a period that took a great psychological and physical toll on him. While in captivity, Graf agreed to play soccer for the Russians, who promised he would be fed if he played for them. At that time, many in the Luftwaffe fraternity who heard about this viewed it as betrayal.

Graf was turned over to German authorities on December 25, 1949 — five years before most of his JG 52 comrades in Soviet captivity. Used as a bargaining chip for several Soviet prisoners the Russians wanted, he reentered a postwar Germany radically different from the fatherland he had left. He arrived at his late mother’s house only to find it had been ransacked by French liberation forces that had stolen many of his possessions, including his military medals and decorations. The death of his grieving mother shortly before his return left a huge void in his life.

While Germany was trying to bury its past and rebuild its future, Graf reportedly felt adrift, but with the guidance of fellow soldier Sepp Herberger, he managed to focus his considerable energies and enthusiasm on forging a new career for himself in the burgeoning electronics industry. With the help of former JG.11 pilot Berthold Jochim, he also penned an autobiography, “200 Luftsiege in 13 Monaten” (200 Victories in 13 Months), which has never been translated to English.

Hermann Graf died on November 4, 1988, of Parkinson’s disease. He is buried in Engen, Germany, where his life began. In the postwar years, his brothers in the Fighter Pilot’s Association decided to make amends and accepted him back as a full-fledged, loyal countryman.

Eduard’s reset of their Fw-190s has met universal approval in the three years since the new “curbside” kits appeared. They lack all the ill-fitting internal detail the first series of Fw-190 kits had, and are absolutely fabulous when it comes to fit and beauty of surface detail. The Fw-190A-5 Light Fighter was among the first of these new kits to be released. In the Profipack version, it has photo-etch cockpit detail and decals for five aircraft.

One of those is Herman Graf’s Fw-190A-5, albeit in the first scheme before it was modified to an Fw-190A-5/U7. However, the markings are actually accurate for this version of the airplane.

When I got the Eduard Fw-190A-5/U3/U8 limited edition “Jabo” kit, it had resin parts to do the dust filters used by Fw-190 “Jabos” in North Africa and Sicily. By applying some Mr. Surfacer to cover the louvered area of the air intakes, I was able to sand them smooth, to use as the U7 field conversion. I had been wanting to do this version since I obtained the Lifelike Decals 48-032 “Fw-190 Part 3" decal sheet, which had detailed markings for his Fw0190A-4 and A-5 in all their versions. I also had the lower wing with the outboard MG-FF cannon in an Overtrees kit, which completed the items needed to do Graf’s ultimate “Mosquito-killer” Fw-190 (Although he never killed any Mosquitos with it).

Assembly departed from the standard system used with the Eduard 190s in that I had to cut the engine cowling parts to allow use of the resin cowling parts with the intakes, and I used the lower “4-cannon” wing from the Overtrees kit.

Eduard’s resin parts are close to absolutely perfect, so all I had to do was glop on some Mr. Surfacer, then sand the intakes smooth, then substitute them in the construction. They fit perfectly and no problems were encountered in the conversion. The lower wing conversion merely required substituting one part for another.e

I used the Eduard SPACE instrument panel for this project, which looks very nice in place when the cockpit is finished. The SPACE set includes photo-etch seatbelts.

The Lifelike Decals instructions have detailed views of the camouflage applied and the yellow-painted cowling and rudder. I followed their instructions, which has the leading edge of the wing with a “wrap-around” of RLM 76 Hellblau.

All of the markings are multiple part, with white backing applied first, then the red markings for the personal markings the airplane carried. Lifelike Decals are excellent and no problems were encountered using Micro-Sol on the decals.

I gave the model a coat of “flattened” Semi-gloss clear, then attached the landing gear, positioned the prop, and unmasked the canopy and fitted it in the open position.

I could spend the rest of my modeling career doing Eduard 190s, 109s, P-51s and Spitfires. The kits are excellent and there is an endless supply of aftermarket decals for all kinds of interesting schemes. I probably won’t do that, but there will always be space for another of these kits when I can gather together the materials to do a one-off I’ve long wanted to have in my collection, like this Graf airplane. It’s been done often by kit manufacturers, but the decals have never been exactly right. With Lifelike doing them right, it was fun to finally do this. 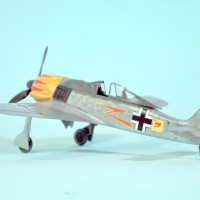 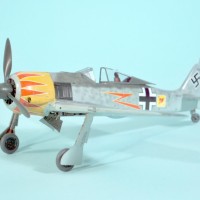 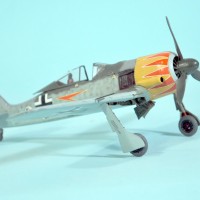 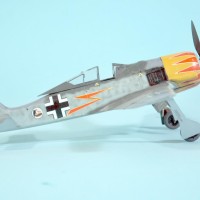 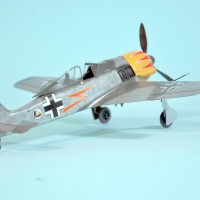 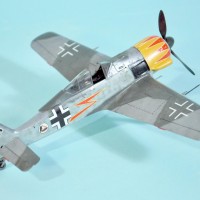 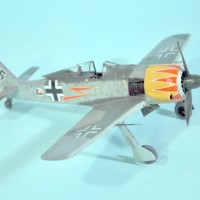 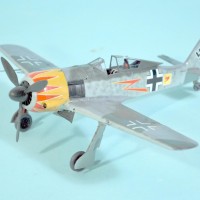 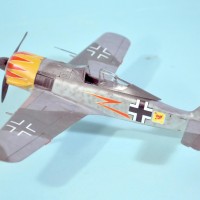 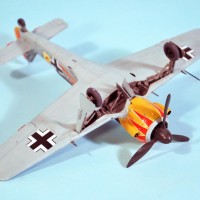 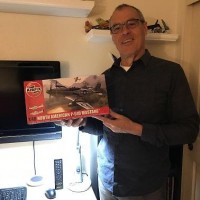 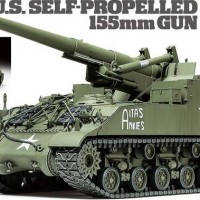 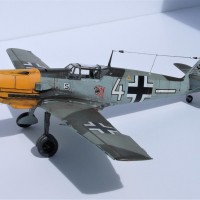 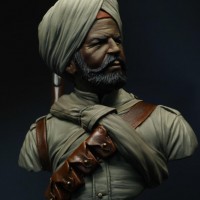