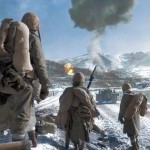 The Korean War started exactly 70 years ago today. This group build will follow the exact dates of the War and will end a little over 3 years from now on July 27th, 2023.

This group build is dedicated to all of the men and women who served their Country during the so called “Police Action”, that is still technically a war. Many do not know this, but all that has stopped the fighting on the front lines along the DMZ in Korea, is a cease fire order that has remained in effect since 1953. The DMZ has been a hot spot on several occasions every since then.

The goal of this group build is to honor all of those who served in Korea before, during, and after the cease fire took effect. They will not be forgotten any more.

Any type aircraft, vessel, tank, wheeled vehicle or tractor, artillery piece, submarine, helicopter, or any weapon of any kind that was used by either the United Nations or the Communist sides during the conflict will be allowed. As long as it was used during the War you can build a model of it.

There is not a new build requirement. If you have a model that is started, but not yet completed, you can post it. This is an effort to help clean out our “shelf of doom” that we all seem to have at some point or another.

Any scale is OK. There is no requirement for any certain scale.

You can scratch build a model if you so desire.

All are invited to join us. No invitation is required.