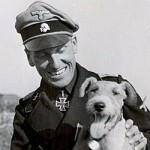 36/M/TX. Obsessed with all things military history-related, especially the WW2 European Theater, as well as Imperial Rome/Great Migration Period and the Dark Ages (especially the Viking Age). Spent some time studying in Germany, Czechia, and much of Eastern Europe. I had my first WW2 history course from a Czech professor in 2005. He became my idol by out-living all the b*stards who didn’t like him (*pointing at the nazis and the commies*). He also translated at the Nuremberg trials, thus solidifying my WW2 obsession.