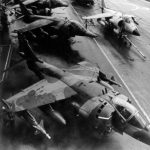 April 2, 2022 will mark the 40th Anniversary of the 10 week long Falklands War between the UK and Argentina. The Falklands War or Falklands Conflict (Spanish: Guerra de las Malvinas) was an undeclared war which began with the Argentinian invasion of the Falkland islands, April 2, 1982. These desolate islands were known as "British dependent territories" to the UK Government and as a province of Argentina called the Islas Malvinas (Malvinas Islands) to the Argentinians. Obviously, this proposed Group Build does not take any particular position on the politics of the conflict. Instead, it is intended to memorialize the drama, technical significance, and human meaning of events and give modelers an opportunity to build a very wide range of possible modeling subjects, based on the great variety of military equipment used by both sides. Amongst aircraft, subjects could include the Sea Harrier FRS 1, Avro Vulcan, HP Victor (Tanker), Westland HU-7 Wessex and Westland Lynx on the British side and the Super Etendard, A4B/C Skyhawk, Mirage lll, IAI Dagger, FMA IA-58 Pucara, and BAe Canberra on the Argentine side. The list is not exhaustive, obviously. Ships are also welcome as the conflict proved the historical worth of the modern Jump Jet-equipped aircraft carrier and the unusual use of a nuclear powered submarine. Armor is limited but includes Scimitars and Scorpions on the British Army side and the Panhard AML-90 for the Argentinians. The types may have met met in "tank on tank" warfare in the Battle of Wireless Ridge, where the Scorpions and Scimitars provided fire support for 2 Para. Specific battles might be the subject of dioramas. Suggestions are welcome. The only rule for historical content is that the models for the GB should relate to action within the 10 week period of the conflict. This would mean, for example, that aircraft stationed later at RAF Mount Pleasant such as the Phantom FGR 2,Tornado or Typhoon would not qualify. The rule for build content is that projects should be current and ongoing - "new builds' - and not older completed models taken off the shelf.

The Group Build will last for approximately a year until the aforementioned 40th anniversary of the Conflict on April 2, 2022.

Let us know if you would like to get involved and, if so, what you might contribute.