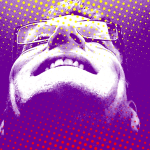 I became an military aviation enthusiast shortly after potty training, when my dad would sit me down with him as he built ceiling decorations for my room... first, a P-51D of a large scale (couldn't tell you the exact scale / manufacturer, but it had wire metal landing gear struts and was partially assembled with screws) followed by a 1/72 F-100D and a parade of old Revell 1/32 warbirds... JU-87B, Dick Bong's P-38, Hurricane Mk.I... giving me the coolest room ceiling in all creation. I was hooked.