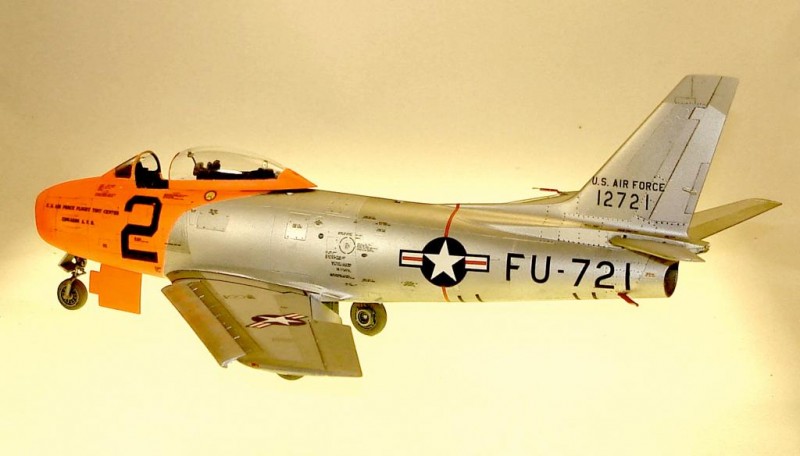 The Need for Speed

Have you ever been browsing through one of you reference books and suddenly see a photo of an aircraft in markings you somehow missed before? That is what happened to me while reading my Squadron in action book on the F-86 Sabre, (No.126), and WHAM! There it was on page 32 and sporting a paint scheme I somehow missed seeing before. The photo was in black and white and I wasn’t sure what the color was on the front third of the fuselage. It looked like white to me, but I was wrong.

So I did what I always do when I don’t know something, I ask somebody. In this case I asked several model buddies and I was told that the color was Day-glo Orange, and that sealed the deal, I had to build this one. I started checking to see if there were any decals in 48th scale of this scheme, and discovered there were indeed, produced by Euro Decals, and available through . Their sheet called “Very Colorful Sabres” was soon winging its way to my mailbox.

My first indication that this wasn’t going to be a slam-dunk project was discovering that the Sabre was an “E” model, and you guessed it, nobody makes a 48th scale kit of this subject. I immediately contacted my Sabre “EXPERT” John Eian from the Twin Cities Aero Historians, my old club up north. John spent hours explaining the differences in the various Sabre marks, and told me the steps required to make an “E” out of an “F”, which made me stop and think how badly did I want to do this project.

The first thing I found was I was going to have to sacrifice a kit of the Sabre Dog made by Revell/Monogram for the wings. Fortunately this kit is reasonably priced, and John pointed out that I could use the “F” wings on the “D” as well, so that’s was some comfort. As it turned out I already owned a kit of the “D” as well as the Hasegawa

The “F” kit has a nice cockpit so the fuselage went together quickly and I was to the wing swap pretty fast. I spent a couple of days dry fitting the new wings and finally took the plunge. As it turned out, the fit was not as difficult as I thought it was going to be, just requiring that the wheel wells were aligned, a bit of putty and a little knife work on the leading edge where it meets the fuselage, and I now had an “E” model in hand.

The rest of the building process was simply out of the box, and now the painting was up next. I like to use ALCLAD paints when doing natural metal finishes, because they havea nice selection of shades of silver to choose from, and they dry very quickly as well. I also like to use TAMYIA tape for masking of the different panels and the clear canopy/windscreen parts, as it creates a good seal at the edge with hardly any bleed. I also often leave the tape down for long periods of time during some projects, and unlike some other tapes, it comes off clean leaving no residue.

I like to start with a coat of Alclad primer to check for seams and other problems, followed with a gentle scrubbing with a 3M plastic pad that will smooth things overall, and then I start with White Aluminum as a base coat. Now the fun starts. I try not to have too many panels with too many shades of metal. Looking at color photos helps identify the obvious different colored panels. I like to pick a few other panels using a subtle shade difference just to break up large areas of silver. I also used a Light Sea Grey on the main panels running the length of the wings, and the tail cap panel. When the panel work is complete, I like to give the whole model a thinned out coat of the White Aluminum to pull things together. This means leaving the tape on the grey panels of course. A coat of clear is applied next in preparation for the decals.

Anyone who has used Day-Glo Orange knows this is a tricky color to deal with. I started with a undercoat of flat white, followed by a coat of gloss white and then applied the Day-Glo. Great care is needed when removing your masking. I used a new X-Acto blade and cut along the tape edge to insure that the paint did not pull with the tape. This gave me a nice clean sharp paint edge.

A new problem arises when the research says the aircraft that set the actual record was the number two aircraft, and of course the decals have just the number four included on the sheet. This resulted in a bit of artwork on my part to produce a new number two, and some fancy cutting on the tail codes to match the correct aircraft.

Also missing was the nose copy saying U.S. AIR FORCE FLIGHT TEST CENTER EDWARDS A.F.B. As luck would have it, my computer has the stencil font on board, so I was able to scan the copy and reduce it to size on the printer, and then I was off to the local print shop to make new decals. The computer sure has been a great new tool for our hobby in so many ways.

The decals that come in the Hasegawa kit are very nice and the data stencils were used. At this time I sealed everything with a coat of ModelMaster Acrylic flat, which actually dries with a nice egg shell finish. All that remained was attaching of the landing gear and doors, the leading edge slats, main flaps, wing marker lights and pitot tube 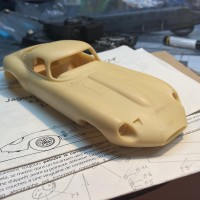 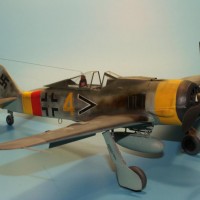 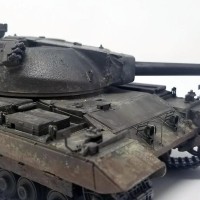