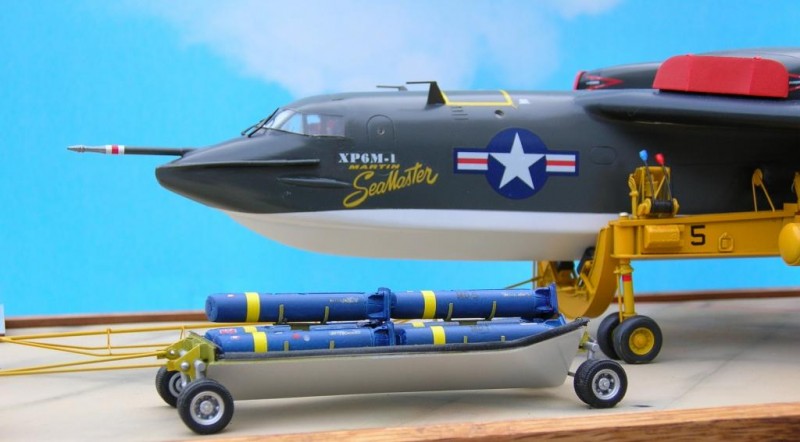 This is my model of the 1:72 Anigrand "SEAMASTER" nuclear bomber. The kit is of resin construction and can be built as the XP6M-1 or as the PGM-2 models. It was my first resin aircraft kit and it's a huge leap from the days of vacuform aircraft models. That said, the kit is very basic and the builder needs to have a little skill to make it a decent display model. I won't go into all the shortcomings of the kit but the biggest disappointment is that the company sold the model with NO DISPLAY STAND! Resin ship models don't come with a display stand but look OK sitting on a keel. But this plane has no landing gear (beaching gear) so it looks silly tilted to one side resting on a wing tip. And the model is not in-expensive, one would think a modest display stand would have been provided. Of course if the prototypical beaching gear had been included, the model would have been worth the steep price as it is an unusual airplane.

If you choose to build this model, the book "MARTIN P6M SEAMASTER" by Stan Piet and Al Raithel is highly recommended. The soft covered book is loaded with photos and notes on this unusual aircraft and makes a fine addition to an aircraft fan's library.

As for the model...I scratchbuilt the beaching gear using Evergreen products and bits and pieces from the scrap box. An innovative feature of the actual plane was the ability to carry a number of different "loads" using a rotary bomb bay door. The Seamaster was to carry a nuclear bomb, mines, conventional bombs, re fueling bladder, and photo recon equipment. I scratchbuilt the fuel bladder, photo unit and mine load to add some visual interest to the model. The crawler tractor, as well as the rubber tire Case tractor, were modified kits. The tow bar was fashioned from brass and the rubber tires from the good old scrap box. To enhance the aircraft I added windshied wipers, water brake and scratchbuilt the jet engine(the book has a bunch of photos of the different engines). I added the engine intake covers as the detail of the intakes would have requires a lot of rework.

In closing, the P6M was an advanced airplane for it's day (faster in flight than a USAF B-47) but changing missions and advancing technology killed this program. But if you're a fan of flying boats (and willing to do some extra building) this model can be a great addition to your collection of aircraft.