Here is the Hasegawa F-8E Crusader modified to be an F-8E(FN)/F-8P, using the Cutting Edge slats and flaps, dive brake, and cockpit, with decals from MDC.

By 1962, the Marine Nationale was undergoing rapid modernization, with two new aircraft carriers, Foch and Clemenceau, about to replace the World War II-vintage US Light Carriers Arromanches and Bois de Belleau. Somewhat smaller than the U.S. Essex class, Foch and Clemenceau were designed from the outset with angled decks and would bring the Aeronavale to a state of equality with other carrier forces.

The Aquilon – a French-built de Havilland Sea Venom – was ready for replacement in the all-weather interceptor/fleet defense fighter role. Unfortunately, the best carrier-based jet the French aviation industry could come up with at the time was the Dassault Etendard, which was not capable of development into a world-class air superiority fighter. Because of this, the Marine Nationale was forced to look at foreign aircraft. At the time, the most two most advanced carrier-based jet fighters in production and operational use were the Chance-Vought F-8 Crusader and the McDonnell-Douglas F-4 Phantom II, and both were the subject of consideration to fulfill the Aeronavale requirement.

The F-8 Crusader was a marvel of design – a supersonic aircraft able to operate off the modernized Essex-class “34-Charlie” carriers of the US Navy, with performance the equal of any land-based opponent. The contest to choose the next generation air defense fighter for the Aeronavale came down to the Crusader upon the realization that the Phantom as it then existed could not operate safely from these smaller carriers. (It should be noted that McDonnell-Douglas did eventually create a Phantom – the F-4M – which operated from British carriers of Essex size, though such operations seriously “pushed the envelope” of operational safety.) There was a single important question that had to be answered if the Crusader was to learn to speak French: could it be adapted to operation on the smaller French carriers? Specifically, could the landing speed be lowered an additional 10 knots?

The secret of the Crusader’s ability to operate aboard ship was its variable-incidence wing, equipped with high-lift slats, flaps and drooping ailerons, which provided the low-speed lift that allowed the airplane to come aboard Essex carriers safely. At the time, Chance-Vought was in the process of developing the F-8E Crusader, which was considered the “definitive” production version, capable of employment as a multi-role air defense or tactical strike fighter. This was the version the French wanted, if the airplane could be further tamed.

The solution was to increase the angle of incidence of the wing from five to seven degrees with the leading edge slats split to provide increased camber at landing speed, with a boundary control system that blew air from the engine over the flaps and ailerons. With all this, landing speed dropped an amazing 12 knots. Larger elevators allowed authoritative control response at the low landing speed in perfect safety.

The French originally ordered 40 single seaters of what was called the F-8E(FN), as well as six TF-8E(FN) two seat trainers. Congressional funding for production of what was called the “Two-Sader” was not forthcoming after the development of a single prototype. Rather than the six trainers, the Aeronavale increased the order for single-seaters from 40 to 42. These airplanes would become the last operational Crusaders, flying operations at the end of the 20th Century, more than twenty years after the type had disappeared completely from first-line carrier-based operations with its parent service and 44 years after the flight of the first Crusader in 1955.

After Aeronavale pilots trained with VF-174 “Hell’s Razors” at NAS Cecil Field, Florida in 1963-64, the first F-8E(FN) Crusaders arrived at Saint Nazaire October 5, 1964, to equip Flotille 12F. Flotille 14F became the second Crusader unit in March 1965. Both squadrons traded a previous Vought product, the F4U-7 Corsair, for their new Crusaders. These two units would operate “Le Crouze” as the airplane became known in the Aeronavale until Flotille 14F was re-equipped with the Super Etendard in 1978, leaving Flotille 12F as the only Aeronavale interceptor squadron for the remainder of the aircraft’s service life.

The F-8E(FN) arrived capable of carrying four US Sidewinder missiles, but was quickly armed with the Matra R530 missile, which was available in both infrared- and semi-active radar-homing versions; this was used until it was withdrawn from service in late 1989. In 1973, the Matra R550 Magic short range infrared-homing air-to-air missile became available for use, while the all-aspect Magic 2 became operational in 1988, and was used for the remainder of the career of Le Crouze.

With the completion of F-8E production, the story of the Crusader might have ended. However, the airplane was so good at what it did that what did happen was existing airframes were re-manufactured, creating even more capable Crusaders. For the F-8E, the changes introduced in Le Crouze were so good, the U.S. Navy had theirs re-manufactured to that standard, re-entering service beginning in 1968 as the F-8J. One of the major areas rebuilt was the wing. In 1969, as the F-8E was being upgraded to the F-8J, the French airplanes were also provided the new wing, which led to a substantial increase in airframe life. Additionally, throughout the 1970s and 1980s, as the F-8Js were taken out of service, they became a source of replacement wings and other spare parts, which contributed in no small way to the long life of Le Crouze.

By the late 1980s, the aircraft was getting decidedly long in the tooth, while the projected replacement – the Rafale-M – was delayed in development. If the Aeronavale was to maintain a fleet defense component, the life of Le Crouze had to be extended. The result again demonstrated the remarkable adaptability of the basic airframe. The upgrade included a new zero-zero capable Martin-Baker Mk. 7 ejection seat. Additionally, the wiring and hydraulic system were replaced while the cockpit instruments were rearranged. New avionics were fitted, including a radar altimeter, IFF, ILS, and VOR to improve all-weather flight capability, and the gyroscopic navigation system of the Mirage F1 was adopted. A Thomson-CSF SHERLOC radar warning receiver was mounted in a vertical fin extension. The first upgraded F-8E(FN) was completed in June of 1992, and by September 1994, 12 aircraft had been modified, now known as the F-8P (Prolongé/Prolonged). The first F-8P, number 35, performed its carrier compatibility tests aboard Clemenceau in early 1993.

Le Crouze never saw combat during its Aeronavale service, though they did see service in war zones. In October 1974, based aboard Clemenceau, and in May-June 1977 aboard Foch, Flotille 14.F participated in Operations SAPHIR I and II over Djibouti in what was then French Somalia. On May 7th 1977, two F-8s from 14.F were to engage in air combat maneuvering with F-100s of 4/11 Jura from the Djibouti air base. The leader intercepted two fighters and engaged, quickly calling his wingman for help when he realized he’d engaged two Yemeni MiG-21s! A tense standoff ensued before the MiGs broke off the engagement to cross the Red Sea back to their base. This would be the only combat interception by Le Crouze.

On September 7th 1982, F-8s of Flotille 12F embarked on Foch for Operation OLIFANT IV, in response to the crisis in Lebanon; they returned for OLIFANT XVII on September 2, 1983 to cover the landing of French troops in Beirut, and again for OLIFANT XX on January 25th 1984, during which the F-8s flew top cover while Super Etendards attacked gun positions in retaliation for terrorist attacks on French targets in Beirut.

In October 1984, Foch participated in Operation MIRMILLON off Libya, in response to tension in the Gulf of Sidra. In 1988, as a result of escalating conflict between Iraq and Iran in the Persian Gulf, Clemenceau took part in Operation PROMÉTHÉ to protect international shipping from attacks by Iranian speedboats from July to September. Iranian aircraft were intercepted on several occasions, though none escalated to actual combat.

The 12 F-8Ps would see considerable operational service in their final years. In 1993, both Foch and Clemenceau took part in Operation BALBUZARD over the former Yugoslavia. Le Crouze operated over the Balkans again in 1995 during the intervention in Bosnia-Herzogivina. The final operational missions came in June 1999, during Operation TRIDENT over Kosovo. F-8P No.35, the first F-8P, was the last Crouze to be launched on a military mission. By then, the twelve remaining Crusaders were so old and fragile that they required 67 maintenance man hours (including major maintenance visits to Cuers) for each flying hour.

Le Crouze ended 35 years of service during Operation PEAN 99, flying from Foch from October 4-28, 1999. The final landing aboard Foch occurred October 28th 1999 at 12:45pm, when Lt. Denis landed F-8P No.34; the final take-off came that evening when Squadron Commandant Guillot took off in F-8P No.11. After 140,000 hours of flight time, including 25,000 carrier landings and take-offs, the last operational Crusaders – No.7, 10, 11, 34, 39 – were retired just short of the turn of the Millennium on December 15, 1999, at NAS Landivisiau in Brittany. The Crusader was in first line service since it first entered service with the U.S. Navy in 1957, 42 years before her final retirement. Only the A-4, which also entered service in 1957 and is still in first-line service with the Brazilian Navy, and the F-4 Phantom, which entered service in 1960 and still serves with seven air forces, have bettered this record.

So far as the model is concerned, the F-8E(FN) is the only Crusader for which it is “correct” to have it sitting on the ground with the wing lowered and the slats and flaps raised – in US Navy service, when the gear is down the wing is up with slats and flaps deployed. However, I wanted to do it with the full treatment of the wing, since I had the entire Cutting Edge F-8J Crusader conversion set.

The resin cockpit is correct for the F-8J, with the Martin-Baker MB 7 seat. I painted and detailed this, then assembled it in the fuselage, after I had cut out the dive brake on the lower fuselage. I attached the resin dive brake well and the wheel wells and the resin interior piece for the fuselage under the wing, then closed up the fuselage.

The model was painted in two parts, fuselage and wing. I used SNJ Aluminum, darkened with grey and black, for the afterburner exhaust section, then masked that. The wheel wells and dive brake well were painted gloss white. The airframe was then painted a mixture of Gunze-Sangyo “Intermediate Blue” and “Blue-Grey,” to get French Air Superiority Blue. A French modeler friend told me that the paint gets darker in a sunny marine environment which seems counterintuitive (to which he replied, “it’s French”, which did indeed explain everything). I went back over the model, adding in a drop of Insignia Blue to the paint, to get the differing surface colors one needs with a monochromatic model.

I used the MDC Decals to do Crusader No. 35, the first F-8P, using the French stenciling markings (the early scheme used English stenciling), carrying the final operational flight markings.

Thanks to all the pre‑fitting done on the wing, making the final attachment of wing to fuselage was not a problem. I then attached the elevators and the landing gear. The speed brake was a bit “fiddly,” but presented no real problems; photos of F‑8s show every position from slightly open to speed brake resting on the ground ‑ I chose a “middle” position, enough to see it, not enough to be in the way. 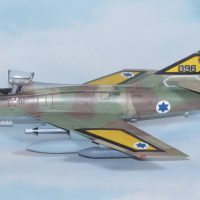 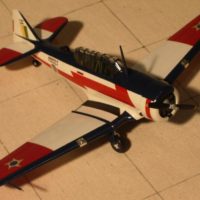 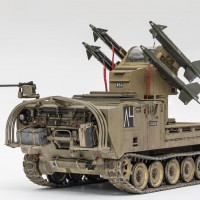 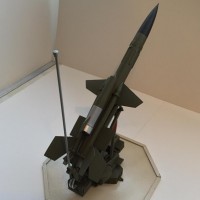