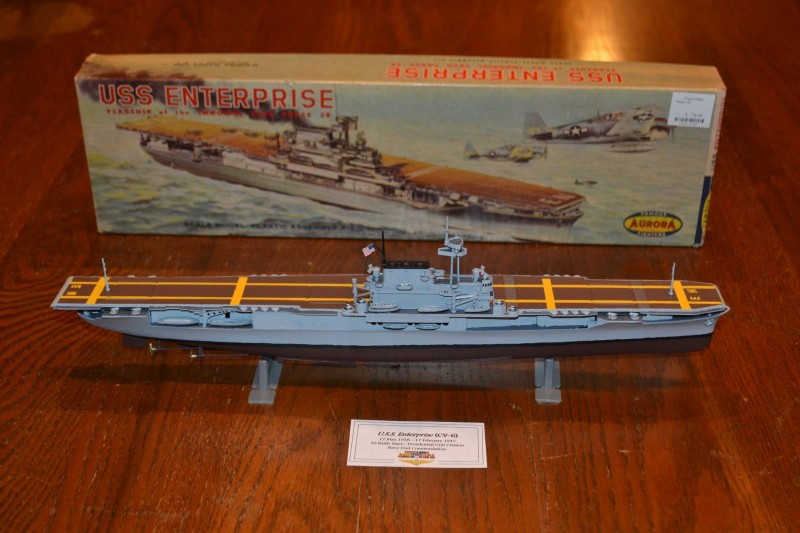 My Memorial Day build commemorating all those that have served our country this year is an appropriate one – the legendary CV-6, U.S.S. Enterprise. Winner of 20 Battle Stars, a Presidential Unit Citation and a Navy Unit Commendation, the Enterprise remains the most decorated ship in the history of the U.S. Navy.

But this build is an unusual one. When I buy and build a model, it is almost always because I’m interested in building a representation of a specific ship or plane at a specific point in time, and the model is chosen as the best available kit to start from. This model is an exception as it represents an “out of the box” build of an extremely old and inferior kit.

The Aurora 1/600 scale USS Enterprise (CV-6) released in 1959 was the first of its “Famous Fighters” series, and for many years was the only injection molded plastic kit of a Yorktown class carrier.

I first built it in 1975, and eventually burned holes in the hull and flight deck to recreate the damage sustained by the Yorktown at Midway. I later acquired another one (shown below also painted to represent the Yorktown) and the most recent I picked up at King Hobby in Austin almost principally for the nostalgia value – I can’t remember ever having the box, and the instruction sheet brought back a lot of memories. The decals for the prewar yellow flight deck striping were useless, but since they’re engraved on the flight deck, I knew I could airbrush them, and the masking would be good practice.

But it certainly wasn’t a favorite model growing up. Although the subject was outstanding, it only had three pathetic little unidentified planes, when what I could do with a ship in my living room “war games” depended on how many planes the ship came with. And even worse, the round bottom meant that the ship had a perpetual “list” to starboard (demonstrated by the old model in the picture), and couldn’t hold any planes on its flight deck. The 1/700 (which I now know is really 1/720) Tamiya waterline kits that came along ten or so year later were far better quality, had more planes, and sat level for wargaming.

After I got the new model last year I spent several months thinking about how to build it. Knowing that it was a sentimental build it didn’t justify any serious accurizing since there are better kits out there in my preferred 1/700 scale. For a long time I planned to paint it in Enterprise’s 1942 Midway appearance – overall Sea Blue 5-S. But, again, the flight deck was already engraved for Enterprise’s prewar appearance, and as I studied the kit I realized that the kit was accurate for a very specific time period long before Midway – Enterprise as built in 1938. The foremast isn’t enclosed and expanded, and the triangular signboard on the port side of the island for providing pilots with navigational information is still there (think of a movie marquee). Both were changed early in 1939 on both Enterprise and her slightly older almost twin sister Yorktown, which would mean some significant scratchbuilding – as well as sanding the flight deck smooth, and completely redoing the AA arrangement – for Midway. I’ve done exactly that before for a 1/700 scale Tamiya Enterprise and I knew I didn’t want to put that amount of work into an off-scale kit.

Instead, I decided to build the kit straight out of the box, painted to match the appropriate time period – 1938 as commissioned. That meant Testors Standard Navy Gray with mahogany flight deck, yellow flight deck striping and letters, and Tamiya Hull Red on the lower hull. In fact I only made three alterations to the kit:

* Bilge keels – both to accurize the kit and to avoid the annoying issues with roll (not that I’m playing with these on the carpet any more, but just on principle – a full hull model should have bilge keels), I added bilge keels from strip styrene, using my larger Revell Yorktown as a guide.

* Ensign gaff & rigging – the model has a paper flag wrapped around the mainmast, and I decided I could do better, so I added an ensign gaff and a piece of stretched sprue, and then attached a U.S. flag from a 1/700 flag decal set.
* Nameplate – a 1/700 USN carrier decal set (the same one that decaled Yorktown 24 years ago) provided a black nameplate.

Now this isn’t the first prewar Yorktown class carrier I’ve begun, although it is the first I’ve finished. The pictures below show the Tamiya Enterprise kit that I modified into a December 1940 Yorktown in 1993. It isn’t quite finished, but it shows both what I used to be able to do in 1/700 scale and what’s possible. (Yeah, those are crew working on and around the yellow-winged planes in the hangar). This is the first time I’ve used the Testors prewar scheme paints, and they are startlingly accurate to color photos of the Enterprise from this period, as shown.

I enjoyed this build, and the opportunity it gave me to work on basic modeling skills, including masking and airbrushing. The principal lesson I learned is that you save an enormous amount of time by painting all the parts while they’re still on the sprue. While I airbrushed (and even primed) the hull, island and flight deck, most of the smaller pieces had to be handpainted three times for the light gray to look right. In many cases that wasn’t avoidable since the parts had come off the sprue in the half-century (or more) that the kit bounced around till I got it, but it taught me how much time you save if you do.

Again, a good subject for Memorial Day when we remember the sacrifices made my the men and women of our armed forces and their families. As well as for the upcoming 75th anniversary of the Battle of Midway – the only time all three Yorktown class carriers ever operated together.

I have placed the kit on a Trumpeter 1/700 scale black base in my display cabinet and never get tired of seeing how much better it looks with the prewar paint scheme and bilge keels. 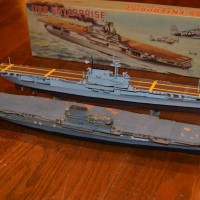 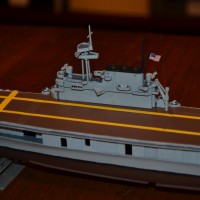 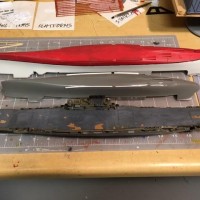 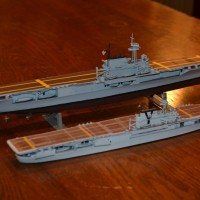 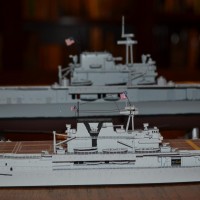 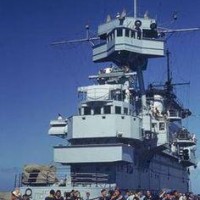 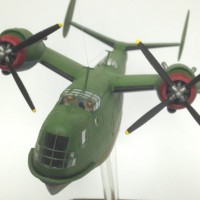 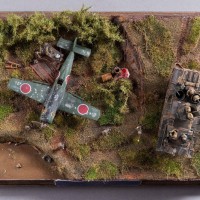 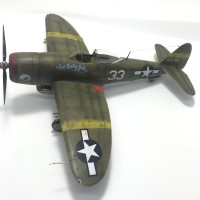 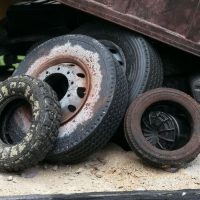