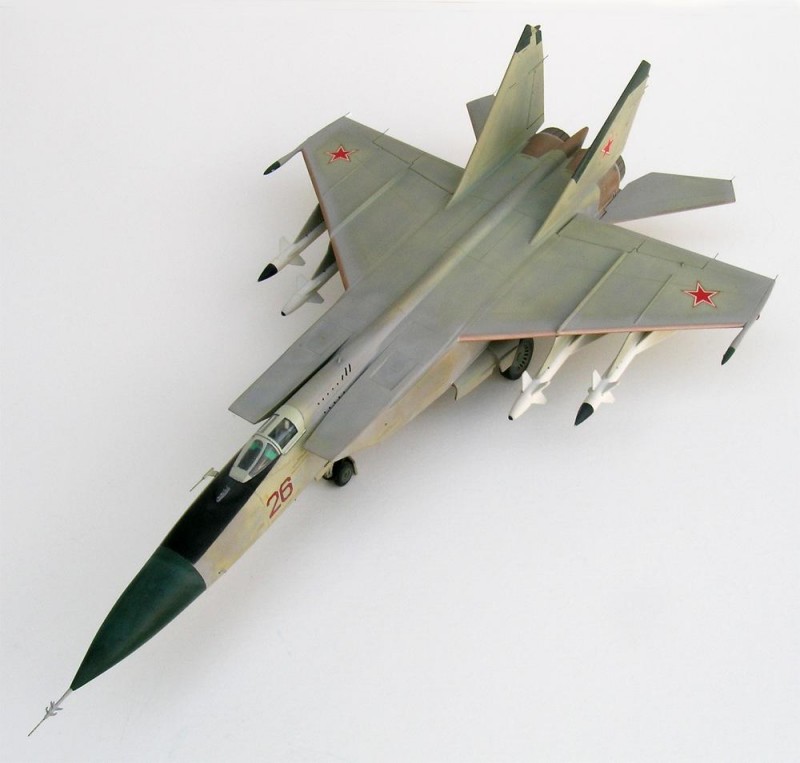 I have always been fascinated with the MiG-25, as much as I am with the SR-71. The Blackbird is the faster aircraft, but according to my info, the Foxbat has flown to a higher altitude, over 123,000 feet (37,650 metres), actually the highest altitude ever flown by a land based air breathing airplane.* It was ballistic, of course, in a zoom climb, but it got there. And it got back. The SR-71 apparently would not have been able to perform such an exercise without breaking up. The MiG-25 has gone places few other aircraft have.

This model and I go way back, to the City. It has survived a couple of free fall flights from the ceiling to the floor below, and had to be somewhat rebuilt each time. The main landing gear always suffered the most, and this led me to try to make that aspect a little more accurate each time I repaired it. Other details were worked on over the years as well.

A Polish book from the publisher Altair, “MiG-25 – Stalowa Blyskawica” by Yefim Gordon and Oleg Putmakov (both Russian) became available in time for the last rebuild, and was a lot of help in figuring out the configuration of the landing gear. This was because of very beautiful and detailed drawings. It was such a good book (even though I can’t read it) that I bought a second copy! Thanks to the long missed San Antonio Hobby Shop for finding this book (and, no, they were not in Texas!). Stalowa Blyskawica means “Steel Lightning” in Polish, and this alludes to the fact that the MiG-25 was mostly made of steel, not titanium as the West initially believed.

Anyway, this is the latest iteration of my MiG-25P model, still from quite a few years ago, with some touch up paint, which gives it the look of “been sitting out in the weather at Monino”, or maybe somewhere at a PVO base in the Arctic or the Soviet Far East (perhaps Chuguyevka air base in Primorsky Krai, where Victor Belenko flew from when he defected to Japan, with his MiG-25). It also seems to have a replacement windscreen and canopy.

A couple of photos, from front and back, show the kind of “clumsy bird on the ground waddle”, like a “gooney bird”, look the Foxbat has on the airfield.

Certain details I added are the compound sweep angle of the wing (very slight at outboard wing fence) which only the interceptor has, the reconnaissance versions have a straight leading edge. And the inner wall of the engine intakes has an interesting double curve to it. These points are illustrated clearly in the Polish book. Also the “wasp waisted” anti flutter booms on the wingtips, featured by the MiG-25P. And some details added to the missiles. But it sure isn’t perfect, and I guess the new Kitty Hawk kit is a step ahead. But this is a model I have become attached to, after rescuing it as many times as I have!

I mentioned in my post on the Monogram 1/48 F-8 Crusader, that in a book on MiG by Bill Sweetman, in the chapter on the MiG-25 Foxbat, he credits the design of the F-8 Crusader as being inspiration for North American’s A-5 Vigilante, which then greatly influenced the design of the MiG-25 Foxbat. It has to do with the high shoulder mounted wing, and slab sided fuselage. In addition, it’s interesting that the initial North American mock up of the A-5 featured twin outward canted fins, a feature that was dropped from the production A-5 (a single slab rudder was used), but one that appeared on the MiG-25!

The MiG-25 has a tremendous amount of character and presence, and also an amazing performance, and it is one of the greatest achievements of the MiG design bureau.

* On 31 August 1977, “Ye-266M” flown by MiG OKB Chief Test Pilot Alexander V. Fedotov, set the recognized absolute altitude record for a jet aircraft under its own power. He reached 37,650 metres (123,520 ft) at Podmoskovnoye, USSR in zoom climb (the absolute altitude record is different from the record for sustained altitude in horizontal flight). The aircraft was actually a MiG-25RB re-engined with the powerful R15BF2-300. 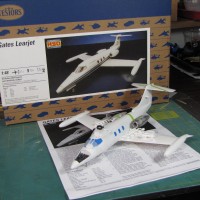 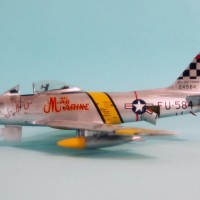 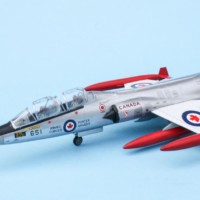 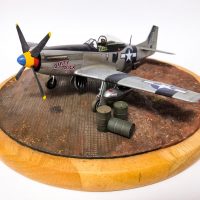