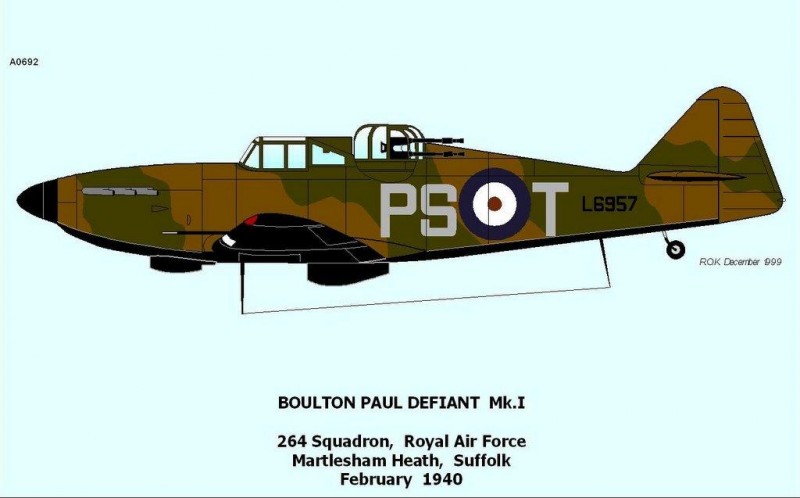 Considered by some to be elegant, dismissed by others as one of the ugliest monoplane fighters of all time... the Defiant was a British two-seater built by Boulton Paul Aircraft as a "turret fighter", literally designed around a novel hydraulically-powered gun turret from the same company.

It has been claimed that the concept of a turret fighter related directly to the successful First World War-era Bristol F.2 Fighter, as if it somehow had made the concept of the Defiant obsolete from the very beginning. In fact, the concept of the powered armament turret was all the rage in the 1930s, and Boulton-Paul were the first British company to produce one that could be fitted into a single-engine aircraft. Its low profile caused a minimum of drag to the airframe, while the hydraulic variable gear system provided a very smooth operating movement in both traverse and elevation. The four Browning guns cleverly mounted in pairs on either side of the turret provided the firepower equal to most of the conventional fighters of the day (at the time there was no way of knowing what cannon armament would soon do to air fighting).

In combat, the Defiant was found to be effective - at its intended task of destroying bombers. The first operational sortie came on 12 May 1940, when the Defiants flew with six Spitfires of 66 Sqn, and a Ju 88 was shot down over the Netherlands. The following day, in a patrol that was a repetition of the first, Defiants claimed four Ju 87s, but were subsequently attacked by Bf 109Es. The escorting Spitfires were unable to prevent five of the six Defiants being shot down by a frontal attack. On 27 May, 264 Sqn claimed three He 111s and two damaged. On 28 May, shortly after take-off, ten Defiants were attacked by about 30 Bf 109s – forming a circle, they claimed six German fighters for the loss of three Defiants. The Defiant was initially successful against enemy aircraft and its best day was 29 May, when No. 264 Sqn claimed 37 kills in two sorties: 19 Junkers Ju 87 Stuka dive bombers, mostly picked off as they came out of their dives, nine Messerschmitt Bf 110 twin-engined heavy fighters, eight Bf 109s and a Ju-88. No. 264 Squadron claimed 48 kills in eight days over Dunkirk, but the the cost was high with 14 Defiants lost.

Lessons should have been learned from these statistics, but Fighter Command insisted on operating the Defiant in the No. 11 Group area which was notoriously infested by enemy fighters. Designed as a bomber-destroyer, the Defiant should have been operated in Scotland, in protection of the naval bases and the potential bomber threat from Norway, facing and destroying the unescorted Luftwaffe bombers and potentially relieving the Spitfire units stationed there.

As it was, the 19 July 1940 saw the combat debut of the second Defiant unit, No. 141 Sqn. Out of the nine Defiants sent to cover a convoy off Folkestone, seven were shot down by Bf 109s. With these losses, the Defiant — which had never been intended to fight alongside the Spitfires and the Hurricanes — was transferred to night fighter operations.

Enter all the black-painted profiles. By the time of the winter Blitz on London of 1940–41, night fighter operations were really in their infancy. Equipping four squadrons, the Defiant proved to shoot down more enemy aircraft than any other available type at the time. The Defiant crews developed a tactics of attacking the enemy bombers from below, in a similar manoeuvre to the later German Schräge Musik method. This was seen as confirmation of a turret-fighter concept for the night fighting role and the fitting of Defiant-type turrets to Beaufighter and Mosquito was tried to enable these aircraft to duplicate these methods. Eventually, the deleterious effect on performance proved too much and the idea was abandoned.

The up-rated Defiant Mk II model, designated solely for night-fighting, was fitted with the AI Mk. IV radar and a Merlin XX engine, distinguishable by its slightly longer cowling.

The Defiant was removed from combat duties in 1942, being supplanted in the night fighter role by the Bristol Beaufighter and de Havilland Mosquito. used for training, target towing, electronic countermeasures and air-sea rescue, as shown in the last profile of this set.

All profiles in this article have been drawn by Mr Rick Kent. Used by permission 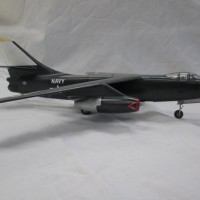 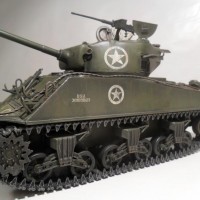 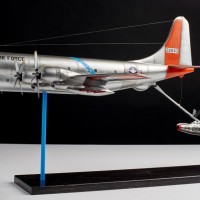 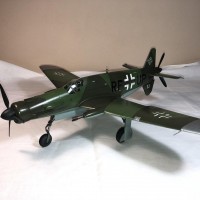