P-47s flown by Mike Gladych in the 56th Fighter Group 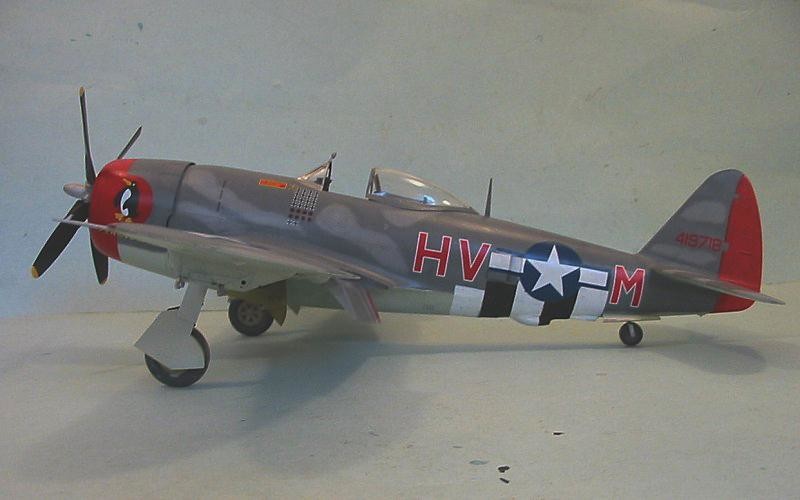 Writing in the “Flight Journal,” P-47 special issue, famed Grumman test pilot Corky Meyer – the last actual “airplane person” to head a major airplane company – named the P‑47 Thunderbolt the “best fighter of World War II ‑ ETO.” As he pointed out, it had high performance, yet a wartime‑trained 200‑hour pilot could fly it. It had a well laid‑out cockpit in which all the controls, switches, and instruments were handily located. It exceeded at three of the four performance parameters he established: air combat capability, fighter escort capability, ground support capability and photo‑reconnaissance (it only missed on the latter). With 15,683 Thunderbolts produced between 1941‑45,the P-47 is the most‑produced American fighter ever. Republic delivered one in 1941, 532 in 1942, 4,428 in 1943, 7,065 in 1944 and 3,657 in 1945. The only theater of war in which the Thunderbolt did not fight was the Aleutians. It is telling that the two top‑scoring American fighter pilots in the ETO both flew P‑47s exclusively, and all 10 of the top P‑47 aces in the ETO survived the war.

Aviation has always attracted “larger than life” personalities, and this has always been particularly so during wars. Among the most interesting “larger than life” pilots to fly during the Second World War was Boleslaw “Mike” Gladych, whose wartime exploits have, over the years since, become merged with romance, hearsay, rumor and embellishment, obscuring his very real achievements. His wartime score is reported as 17 claimed destroyed, 2 probables, 1 shared damaged, and 5 ground kills, all achieved while flying with the RAAF and the RAF, which makes him the only leading Polish ace who never flew in the Polish Air Force. While the U.S. Air Force recognizes his ten victories claimed while flying with the 56th Fighter Group, these are not officially recognized by the Polish Air Force, due to the “irregular” manner with which he and the other Poles attached themselves to Francis Gabreski’s 61st Fighter Squadron in 1944. It is also rumored that he deliberately under-claimed so that he would avoid promotion and could continue flying combat.

Gladych graduated at the top of his class from the Polish Air Force Academy and was commissioned on September 1, 1939, too late to see active service. Toward the end of the Polish campaign, he led a group of newly commissioned pilots who flew PZL P.7 fighters of the Polish Pilot’s School to Romania, where he was interned by the Romanian government. Escaping from the internment camp that December – and reportedly killing a guard in the process – he reached France in the spring of 1940 and joined the recently formed Polish-manned “Finnish” Squadron, which just missed being sent to fly in the Winter War. The unit then became an Armee de l’Air Polish volunteer unit- Groupe de Chasse I/145, and was equipped with the experimental Caudron C.R.714 lightweight fighter.

Gladych claimed victories during the Blitzkrieg, but these were never confirmed officially, probably due to the confusion of battle. With other Polish veterans of the French campaign, Gladych managed to get to Britain following the French surrender, and was eventually sent to 303 (Polish) Squadron in October 1940. His first claims with the RAF were not made until June 23, 1941, when he claimed 3 Bf-109’s shot down and a probable in 2 sorties. Following the second fight he crash landed at Manston, receiving some severe injuries that hospitalized him until October. In 1942 he transferred to 302 “City of Poznan” Squadron, where he was promoted to Flight Lieutenant and served as Flight Commander.

With his second RAF tour completed in January 1944, and credited with seven air victories, Gladych was in no mood for a ground assignment. He and Flight Lieutenant Witold Lanowski turned the friendship they had made with Major Francis Gabreski during his service with the Polish Wing in the summer and fall of 1942 into an opportunity to serve in the 61st Fighter Squadron of the 56th Fighter Group. Officially, Gladych was assigned to organize air combat training for replacement pilots, but he managed to fly combat missions. His first score with the 56th was two Bf-109s shot down on February 21, 1944.

In June, 1944, by which time he had scored another eight victories, the Polish Air Force discovered Gladych, Lanowski, and four other Polish pilots had “slipped the bounds” and were flying combat with the Americans. The Polish authorities threatened to expel all of them from the Polish Air Force, and four of the pilots did quit the 56th. Gladych and Lanowski continued and were expelled. Between June and October 1944, neither man was officially in anybody’s armed forces! The Polish government relented in October and restored them to membership in the Air Force. The result of this is that the Polish Air Force does not recognize Gladych’s ten aerial and five ground claims with the 56th FG, though the USAF does. During his time in the 56th, Gladych was unofficially carried as a “Major,” the equivalent of his RAF rank of Squadron Leader. All the P-47s he flew in the 56th were named Pengie, the nickname of his Canadian WAAF girlfriend, which continued to Pengie V as he received newer aircraft. His insignia was the cartoon image of a penguin on the left side of the engine cowling.

While Gladych served with the 56th to the end of the war, it is also rumored that he went off and flew with an un-named P-51 group during the period when the 56th was having difficulty with their new P-47Ms and shot down an Me-262, though this has never been verified.

Gladych was summarily dismissed from service with the USAAF following the end of the war, but not before he used his unofficial “USAAF” status to rescue his brother, a Polish resistance fighter, from a Soviet POW camp. During the war, Gladych was awarded the Virtuti Militari, (Cross of Valor) with three bars by the Polish Air Force, the Distinguished Flying Cross by the RAF, and the Silver Star with two clusters, and the Air Medal with three clusters by the USAAF.

In the early 1950s, Gladych emigrated to the United States and settled in Seattle, Washington, where he married “Pengie” and returned to school where he gained a Ph.D. in psychiatry. A friend of the legendary Gil Robb Wilson, then editor of “Flying” Magazine, he wrote about his adventures in the magazine during the 1950s, which is where this then-young avid reader of all things “airplane” first ran across his name.

During the 1980s, Gladych, a well-known psychotherapist, became a Buddhist and embraced the philosophy of nonviolence, giving up all contact with his wartime comrades.

The models are both 1/32 Hasegawa. The P-47M is painted “dark plum” – using Gunze-Sangyo “Wine Red” and “Gloss Black” to approximate the color of a model built for Gladych by his crew chief, painted with the actual paint used on 61st Fighter Squadron P-47Ms.

When assembling the Hasegawa P-47, you will do yourself a favor if you modify the mount on the back of the engine by raising the hole in the top of the backplate about 1/16 inch, which will allow the engine and cowling to align with the fuselage. 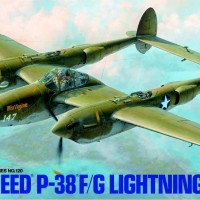 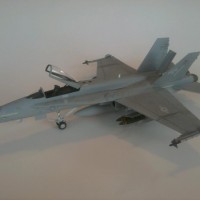 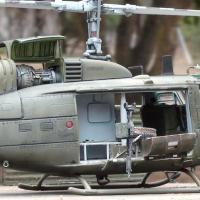 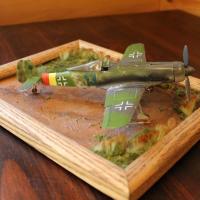