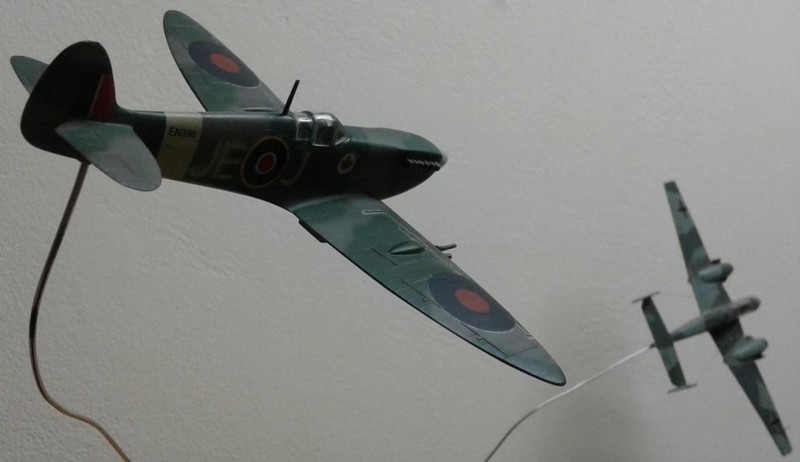 This is my tribute to Air Vice Marshal “Johnnie” Johnson. It is a simulated dogfight between his Spitfire IX JE J EN398 and a Bf-110 C.

I will not go into the history of those amazing planes, as they are so well documented, but I will quote (from wiki) a few words about this incredible man:

Johnson grew up and was educated in the East Midlands, where he qualified as an engineer. A sportsman, Johnson broke his collarbone while playing rugby, an injury that later complicated his ambitions of becoming a fighter pilot. Johnson had been interested in aviation since his youth and applied to join the RAF. He was initially rejected, first on social, and then on medical grounds; he was eventually accepted in August 1939. The injury problems, however, returned during his early training and flying career, resulting in him missing the Battle of France and the Battle of Britain between May and October 1940.

In 1940 Johnson had an operation to reset his collarbone, and began flying regularly. He took part in the offensive sweeps over German-occupied Europe from 1941 to 1944, almost without rest. Johnson was involved in heavy aerial fighting during this period. His combat tour included participation in the Dieppe Raid, Combined Bomber Offensive, Battle of Normandy, Operation Market Garden, the Battle of the Bulge and the Western Allied invasion of Germany. Johnson progressed to the rank of group captain by the end of the war.

Johnson was credited with 34 individual victories over enemy aircraft, as well as seven shared victories, three shared probable, 10 damaged, three shared damaged and one destroyed on the ground. Johnson flew 700 operational sorties and engaged enemy aircraft on 57 occasions. Included in his list of individual victories were 14 Messerschmitt Bf 109s and 20 Focke-Wulf Fw 190s destroyed making him the most successful RAF ace against the Fw 190. This score made him the highest scoring Western Allied fighter ace against the German Luftwaffe.

Johnson continued his career in the RAF after the war, and served in the Korean War before retiring in 1966 with the rank of air vice marshal. He maintained an interest in aviation and did public speaking on the subject as well as entering into the business of aviation art. Johnnie Johnson remained active until his death from cancer in 2001.

This is one of the venerable Airfix “dogfight doubles” series, originating in 1967 as a combo and even earlier as individual planes.

Mine is a 1998 rebox, discovered in 2006 at a nearby small town’s bookstore from where I live (Halkis, Greece) at the ridiculous price of 6 euros. I grabbed it, together with some other forgotten old Airfix and Heller old sweeties (F-84G, Ouragan, Avenger, Alpha Jet and some others at 3 euros each!).

Was indecisive about building the combo, the kits being anciently as basic as they can get. Then this idea of displaying them opposing together in their dogfight struck me. The models may not hold their own for today’s standards, but “dioramatized” at their dogfight moment sounded promising… but how could it be implemented?

First, I assembled and painted the two kits, wheels up. They went together beautifully. Do not expect todays detail standards, just build, paint and envision the dogfight! I cut the propeller blades to “simulate” the running engines, where the propellers are “almost” invisible. I followed Airfix’s painting instructions…maybe the colours are a bit off. Well, I declared them acceptable and proceeded. Had no problems with the decals, apart from the typical (till recently) Airfix-Heller off-registration (slight or not so slight!). I drilled a hole at each end of each plane to have them ready for attachment at the custom “dogfight stand” (!) I would construct.

For the display stand, I used an aeroengine scrap gear, painted silver, where I had two suitable pieces of stainless steel wire welded roughly anti-diametrically. These were accordingly twisted with the planes attached, so as to display a somehow realistic planes’ position, but also to preserve a weight balance for the whole assembly, as the wires are quite long, resulting in not negligible torque forces. Regarding the planes’ positions, guess who’s chasing who…….

The Spit canopy was knocked off 6 years ago and disappeared. Was recently mysteriously found “very slightly damaged…” declared “useable” (go figure!) and reattached….

I printed at a ciel tone paper a nice b/w combat photo of the Marshal in his Spit and laid it at the base. Voila! It was done!

I tried to make some dramatised pics...

Those kits are definitely ancient, but very sweet to build. Displaying them in dogfight position sparkled my imagination and I went on reading a lot about the amazing Air Vice Marshal. 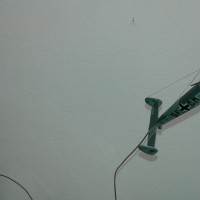 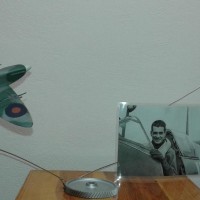 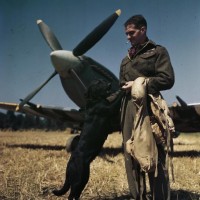 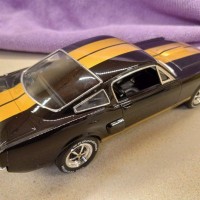 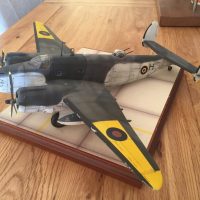 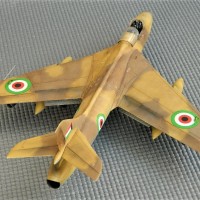