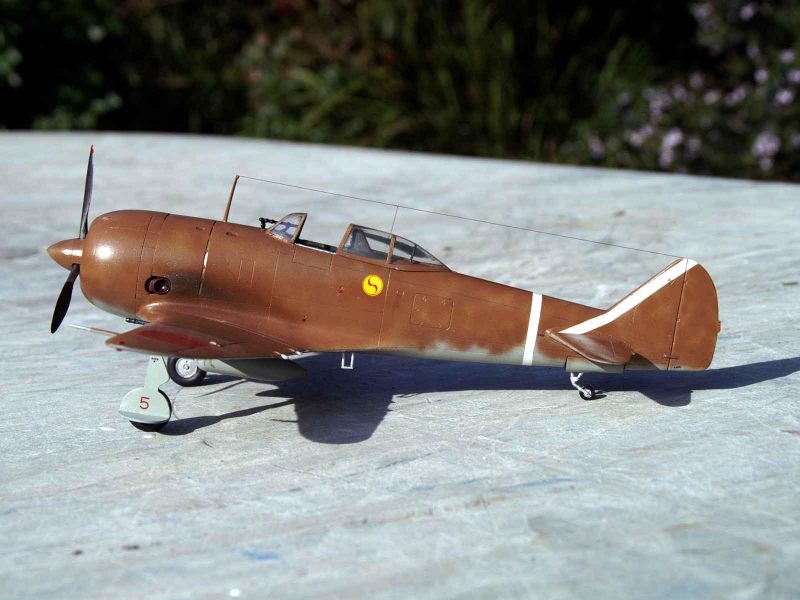 The subject this model represents is Ki-44 No. 4405, which was the 5th pre-production (prototype) aircraft, flown by Maj Toshio Sakagawa, commander of the 47th Dokuritsu Hiko Chutai (47th Independent Flight Company), Saigon, French Indochina, December 1941. Sakagawa served in China prior to Japan's entry to World War II without any opportunities to engage the enemy, although he later led the 25th Sentai in China and achieved 15 victories prior to his death on 19th December 1944. In August 1941 he was assigned the leadership of the JAAF's experimental unit, the 47th Dokuritsu Hiko Chutai, which had been set up to test the Ki-44 in combat. It was equipped with nine pre-production aircraft, Nos. 4402 to 4410.

The nine aircraft were divided into three flights. The lead aircraft of each flight had a single, slanting tail stripe, white for the first formation, yellow for the second formation and red for the third. The second aircraft in each flight had two stripes and the third aircraft had three stripes in the same flight colours. Each of the aircraft featured a unit insignia, under the cockpit on the port side, of a Yamaga-ryu drum design recalling the legend of the 47 Ronin.

There were a number of design changes evident from the first prototype to the 7th pre-production aircraft (No. 4410).

The 1st prototype, 4401 had a number of differences from the production aircraft;

louvers behind the cowl flaps

the aerial mast mounted on the rear canopy section

the centre canopy slid back and under the rear canopy

Ki-44 No. 4402, the second prototype didn’t have the louvres of the first prototype, but retained the same canopy, spinner and undercarriage leg covers. References show it with a single, centreline mounted drop-tank, with a small number 2 on it. Production aircraft would have two drop-tanks mounted inside and aft of the main undercarriage.

The next aircraft for which I have found photographic evidence is No.4405. This aircraft has the production canopy, with the centre canopy sliding over the rear canopy section which in turn required the relocation of the aerial mast to forward of the cockpit. The aircraft retains the pointed spinner, single piece main gear covers and single, central drop-tank.

This kit is a special edition which provides the standard sprues for the Ki-44 along with the additional plastic parts needed to convert it to a pre-production aircraft. This includes a new, more pointed spinner, single piece wheel covers with the lower section folding out at 90º when down and inserts for the central section of the wheel wells (accounting for the single piece wheel covers, rather than the separate inner doors of the production aircraft). It includes three decal options, 1st formation leader and company commander, Maj Toshio Sakagawa (No. 4405), 2nd formation leader Capt. Susumu Jinbo (No. 4406) and 3rd formation leader Capt. Yasuhiko Kuroe (No. 4408).

So, the kit allows the modeller to build any of the aircraft from No. 4405 onward, although with a bit of modification if you want to add the single drop-tank to 4405 and 4406. I'm not sure about 4403 (prototype 3) and 4404, although you would assume the latter had the production canopy like 4405. It would be up to the modeller to decide if 4407 had one or two drop-tanks.

I chose to build No. 4405, in part because I had two good photos of it, and because the single drop-tank would make it stand out from other Ki-44s.

Construction was straight forward except for the modifications required to fit the new parts, as shown in the instructions, and my own modifications to add the single drop-tank.

The trickiest bit was removal of a section of each wheel well to fit one rectangular insert each side. My inserts were a little warped so I straightened them out as best I could without losing the detail. A third small part was placed between the wheel wells to cover the recesses for the inner gear doors on the production aircraft.

The instructions would also have you enlarge the recess for the exhausts, but looking at photos of the aircraft, I think this is just a trick of the light and exhaust staining, so I didn't bother.

The kit instructions ignore the drop-tanks. As noted above, the third option, No. 4408, could use the kit drop-tanks as provided, but the other two require modifications to mount a single centreline drop-tank.

I filled in the drop-tank attachment points under the wings and worked out where the centreline tank would go. References show the drop-tank to be located behind the undercarriage bay and I assumed the tank would be as far aft as the wing tank locations. The fuel connection lines are offset to port to avoid the fuselage keel structure. The kit drop-tanks are handed to allow for the wing dihedral, so I removed the sway braces and fuel connection lines and replaced them with sections of dressmaker pins.

The cowling is cast as a single piece, which is quite nice except there is a slight step around the forward curve of the nose where the mould sections obviously join. This was the same on a second kit I built. For this build, it was simple enough to sand the cowling smooth.

One thing to watch with the Ki-44 is that the butterfly flaps extend slightly aft of the upper wing when retracted, as they are moulded on the kit. Don't make the mistake of trimming these back.

Like many contemporary aircraft, the Ki-44 had a small, retractable boarding step on the lower port side, but Hasegawa moulds this closed. I decided to carve out a slot where the retracted step outline was and scratch build a step with dressmaker pins and scrap plastic.

The only other additions were Eduard pre-painted lap belts and drilling out the wing gun barrels.

The interior was painted Nakajima Interior Green as per the instructions and the wheel wells Metallic Blue-Green.

The pre-production Ki-44 were initially painted overall grey and had Hinomaru on upper and lower wing surfaces but not on the fuselage, as was the official requirement prior to 1942. When they moved to Saigon on 9th December 1941, the Ki-44s were painted brown to match the local terrain. Photos show this to be rather rough and patchy.

As usual, I pre-shaded the kit before applying an overall IJA Grey.

The kit decals have a pinstripe border to the fuselage stripe, but I think that is just the effect of the stripe being masked-off when the new camouflage was applied. Therefore, I painted the fuselage and tail stripes and masked them off. Next, I replicated the patchy look of the upper surface camouflage by applying a dense mottle of brown, having first masked for the upper wing rondels to give a pale halo effect.

After a gloss coat and the few decals were applied, I sprayed a dirty grey for exhaust staining. I was rather happy with the top surface colouring so decided that this was a freshly repainted aircraft on 9th December 1941, ready for the Japanese drive south through the Malay peninsula and the Dutch East Indies, so I didn't weather it further.

As the drop-tank on No. 4402 had a small 2 on its nose I decided to add a small 5 to my kit's drop-tank using the small number indicating the fifth decal on the decal sheet.

The last thing to do was to unmask and position the canopy and add an antenna wire and lead-in.

Apart from the warped wheel well parts, which I couldn't quite flatten out, this kit went together very nicely and builds into a very good looking aircraft. 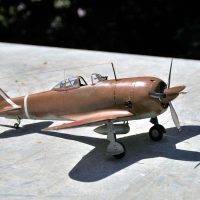 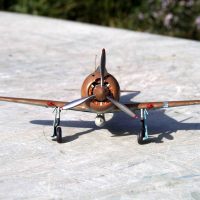 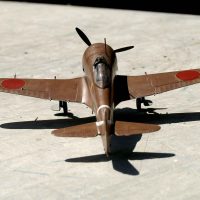 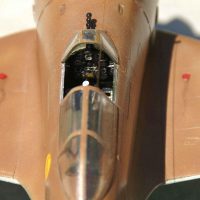 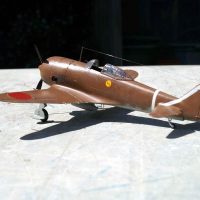 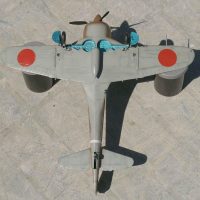 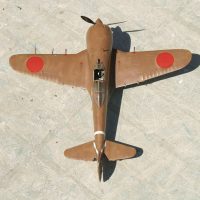 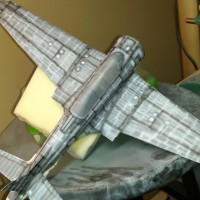 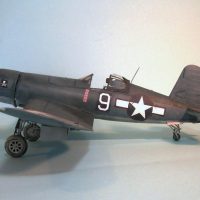 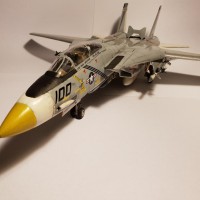 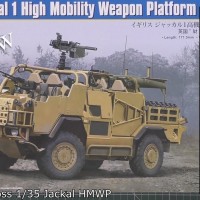