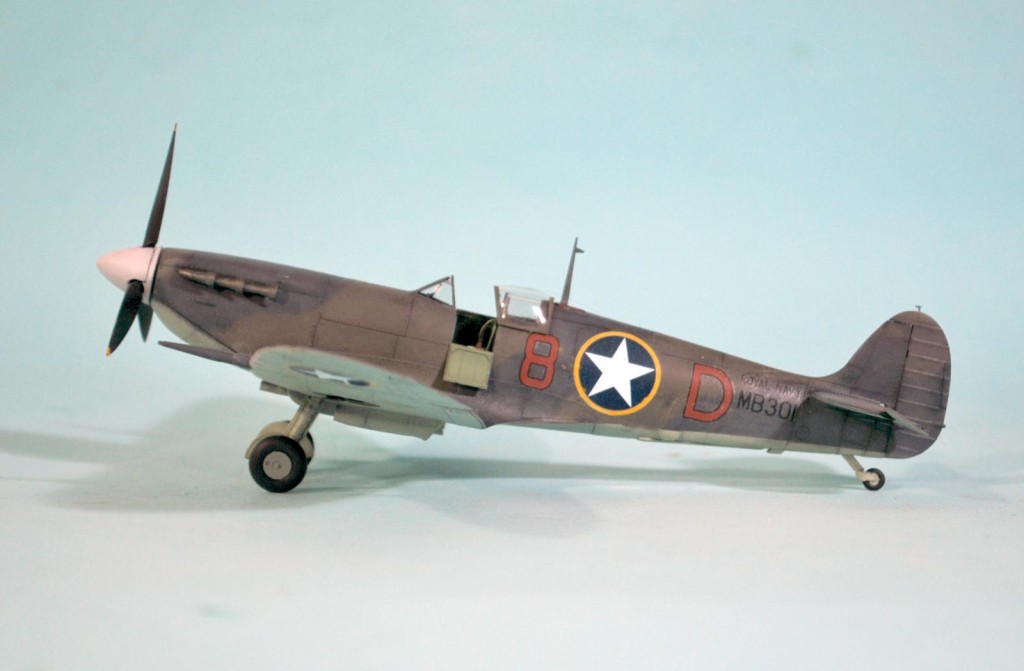 Writing in his memoir, “They Gave me a Seafire,” Commander R 'Mike' Crosley said: “It was inevitable that the FAA had to have the Seafire. It was the only fighter available that would fit into the new, low-hangar-roofed Implacable and Indefatigable. There were no other British aircraft. Hawker’s Hurricane replacement — the Typhoon — was too large, the Martin-Baker MB5 was not being built and the Blackburn Firebrand had yet to fly properly. The Hurricane itself was not available in sufficient quantity and it was unlikely to be fitted with the Griffon engine or be modified to allow wing folding.”

The first “real” Seafire rolled off the production lines was the Mk IIc and began to enter service in September 1942. This was a variant of the Spitfire Mk VC.

Some 40,000 man-hours was spent redesigning the Spitfire fuselage to seamlessly integrate the arrester hook and the necessary strengthening to accommodate carrier launches and landings. Yet it did not yet possess a folding wing.

Instead, the “C” designation meant the type used the Spitfire’s “Universal” wing, with provision to carry up to four upgraded 20mm Hispano cannon (120 rpg). But the navalised fighters never carried this configuration because of the extra weight which lengthened the take-off run. The Seafire IIc retained the two-cannon, four machine-gun configuration.

The capacity to fit a 250lb bomb under the fuselage would also be rarely used, also due to weight and range issues.

A few extra modifications were based on the experience of the Mk IB, mainly extra strengthening around the catapult spool points.
The landing gear also was redesigned and strengthened – along with being angled forward in the hope of reducing the fighter’s tendency to topple on its nose.

The Seafire’s low profile made it difficult to launch via catapult, with the propeller barely clearing the raised accelerator housing aboard the fleet carriers. This proved to be of little concern: Seafires required very little deck to get airborne unassisted.

Combat experienced prompted the addition of extra armour under the pilot’s seat to protect him from ground-or-sea based anti-aircraft fire.

The most significant change was the addition of a structural-strength fishplate, which ran along the mid-fuselage longeron between the forward cockpit bulkhead and the radio bay.

In all, 53 modifications had been made over the original Spitfire airframe.

The resulting aircraft retained most of the Spitfire's advantages - and disadvantages. The Seafire IIc climbed twice as fast as the F6F-5 Hellcat at 2,980 fpm. But the Hellcat had a combat radius of 340nm against the 140nm of the IIc.

The Royal Navy, however, regarded the interception capability of the Seafire to be of equal importance to that of the loiter capacity of its American counterpart.

Two main versions of the Mk IIc were built.

Brown also said of the f. Mk. IIc: “My enthusiasm for this new Seafire variant was such that, one afternoon, in sheer exhilaration, I looped it around both spans of the Forth Bridge in succession – court-martial stuff nowadays, but during a war nobody has the time to bother with such formalities.”

The L.IIc adopted the Merlin 55 with cropped impeller. Like the similarly-equipped Spitfire Vb version, it had superior performance to both the Spitfire IX and Fw-190 below 8,000 feet. Since it did not have the heavier folding wing of the Seafire L.III, it was the fastest low-level Seafire interceptor; eventually all the F.Mk.IIc’s had their engine swapped out by the end of 1942 in favor of the Merlin 55 and thus all Seafire IIs became L.IIc. It could be distinguished parked on the line by the fact it was the first Seafire to have a 4-blade propeller.

Seafire IIc’s first saw action at the invasion of North Africa in November 1942. They operated from HMS Furious, which had an elevator that allowed Seafires with non-folding wings to be struck below, for the missions against Tirpitz and escort of Murmansk convoys in 1943 prior to the re-equipment of fleet squadrons with the Seafire III.

The Seafire proved an excellent fighter - in the hands of above-average flyers. It was often a coffin for those who were not.

Many Seafire pilots thought the IB model was the overall best of the Merlin-engined aircraft as it was the closest to the original Spitfire. The penalty on weight and aerodynamics in the Seafire III through the strengthening of the arrester hook, catapult spool and folding wings brought a reduction in speed and poorer handling.

Performance concerns were raised shortly after Operation Torch in 1942 when 807 Squadron’s Seafires proved unable to overhaul Ju88s. A Ju88 bombed HMS Furious when the Seafires were landing. One pilot broke off his approach but was unable to jettison his 30gal ventral tank, which reduced his top speed to only 310 mph. Later that same day a patrol of two Seafires - one a IB and the other a IIc – failed to catch another Ju88. The IB was faster in the chase.

All Seafires retained the Spitfire’s outstanding rate of climb. Pilots knew they could extricate themselves from virtually any trouble by pulling the nose up and letting the Merlin haul the light fighter away.

However, the Merlin’s operational life was much shorter at sea than the 500 flying hours for its land-based sisters. Hard wear from the boost used in take-offs and the jolts from landings saw engine changes being conducted after every 200 hours.

The Seafire possessed excellent carrier-deck take-off characteristics, needing as little as 5mph of “over-deck” wind to get into the air.

The main complaint about the Seafire was deck landing. A successful Seafire deck landing required a “three-point” landing. If the fighter hit on just its main wheels, it would bounce over the arrester wires and go into the crash barrier. In spite of its evil deck-landing reputation, Seafire squadrons proved capable of catching an arrester-wire at 40-second intervals.

Throughout its service, there were attempts made to mitigate its landing weaknesses: In March 1943 all Seafire Mk IB and IIC aircraft received modifications to their arrester hook to increase its load from 7,000 lbs to 10,500lbs. In August 1943,the strengthening of the arrester “A” frame and fittings was initiated.

The Seafire’s propensity for a high crash rate on small escort carriers in the windless skies over Salerno increased concern over the type’s suitability as a naval fighter.

Following the Salerno debacle, three Seafire IIs and the escort carrier HMS Ravager were allocated to an urgent testing program to identify problems and develop improved landing techniques in November 1943. Test pilot Lieutenant Eric Brown was ordered to put the Seafires through a rigorous program of testing “until something broke”.

In fact, the poor performance at Salerno was due to the absence of wind and the fact the CVEs the Seafires were based on had a top speed of 15 knots, so they could not produce enough wind over the deck for safe operations. They were also stationed too close to shore, with the radar unable to give sufficient warning of attacks. Had they been a few miles further offshore, they would have gotten more wind and better warning times.

In the tests, Brown wrecked two. His testing program involved landing at incrementally lower speeds and heights, as well as experimenting with different approach techniques. As a result, the main undercarriage legs were strengthened and extensive landing trials conducted aboard HMS Pretoria Castile in February 1944 and HMS Indefatigable in March to find ways to eliminate the Seafire’s tendency for arrester-hook bounce.

A major discovery of these trials was that arrester wires needed to be correctly tensioned to avoid the tail of the Seafire rising after capture, which caused the propeller to make contact with the deck.

The Seafire's low endurance limited the usefulness of the interceptor on fleet carriers where mutli-role aircraft were rapidly becoming the norm. Early Seafires could remain on station for only 45 minutes under combat conditions. The Sea Hurricane was barely better, offering only one hour CAP patrols. The Martlet could stay on station for 2 hours 15 minutes, while the Fulmar averaged 2 hours. As a result, the Seafire was initially reserved for defensive missions.

Crosley wrote about the Merlin-powered Seafire’s performance in comparison with other aircraft:

“We had several interesting dogfights with the much larger and more powerful F4U Corsair. In turning dogfights, the Corsairs were unable to get a bead on us if we saw them first. However, they could, like the Fw 190, out-dive us (both starting together) because of their much higher density (weight/ frontal area). Also, above 15,000 feet, they were faster than Seafire LIIIs. However, the FIII with its two speed, uncropped supercharger, could easily keep up with the Corsair at 20,000 feet and above. The Corsair could not out-turn a Seafire I, II or III as has been claimed. However, if the Corsair slowed down to about 90 knots and then the pilot selected half flap — provided it was down to its last 50 gallons of fuel — it could hold a Seafire LIII in a turning match at this speed and configuration at heights above 10,000 feet. Below this height, the Seafire, if it did not overheat (Seafire IIIs all had additional thermostatically controlled engine cooling radiators under the port wing), could outclimb the Corsair while making the turn and ‘spin it off’. Each type and mark of fighter aircraft ever built has its ‘best’ height for various performance aspects and where it can out -perform most of the others over a narrow height band . For the Seafire LIII, this height band was 0 — 12,000 feet .”

Eduard released the Spitfire Mk Vc in January, the second time a Mk. Vc has been released - the first being a limited-run kit from Special Hobby. This kit is fully up to the industry-leading standards Eduard has set for Spitfire models since the release of the Mk. IX back in 2011.

I decided to modify the kit to create a Seafire IIc, since I had the Aeromaster Seafire At War Pt. II decal sheet. When I realized while reading Crosley’s memoir that 807 Squadron - for which markings were provided on the Aeromaster sheet - had been the first to go to war in Operation Torch, this meant I could do the conversion as an F.II with the 3-blade Rotol prop in the kit.

Once again, following my practice of assembling the wing sub-assembly to the completed fuselage by first attaching the lower wing, then attaching the upper wing parts, allowed me to get good solid easy fit all around with no recourse to any filler on the kit.

To modify the model, I cut open a slot in the lower fuselage and fitted a scratchbuilt tailhook. I then used some .010 Evergreen sheet to make the fairing over the A-frame of the hook, and the reinforcements on the fuselage side.

I painted the model in the FAA scheme of Dark Sea Grey, Dark Slate Grey and Sky, freehanded with my Paasche-H brush.

The Seafires of 807 Squadron operating from Furious for Operation Torch overpainted their national markings with US markings in order to not provoke the Vichy French with memories of the Royal Navy attack on the French fleet at Oran in July 1940. I used the Aeromaster Seafire decals for the squadron and other markings, and yellow-surround US insignia sourced from the Decal Dungeon for the insignia.

Now I have a Seafire II in my collection, and it’s an Eduard Seafire II. It will be interesting to see if Eduard brings out a Seafire; if they do, my guess would be a Mk. III.

There’s no such thing as too many Eduard Spitfires on the shelves. 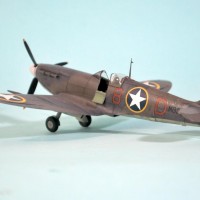 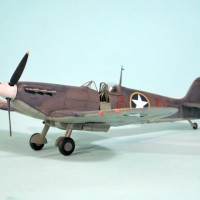 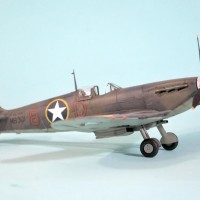 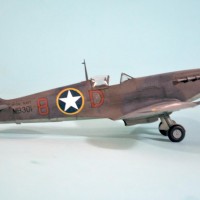 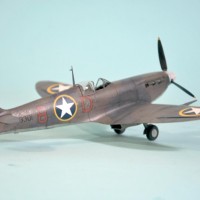 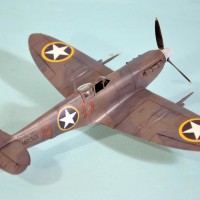 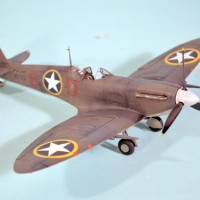 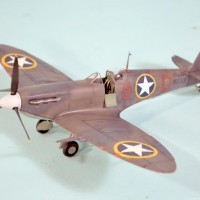 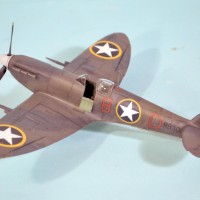 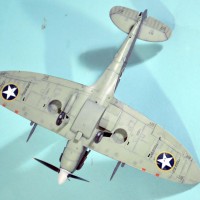 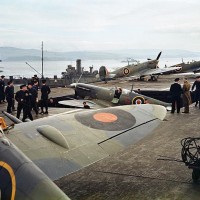 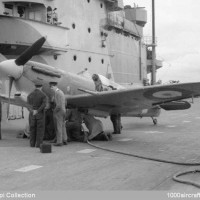 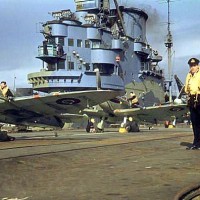 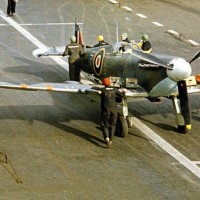 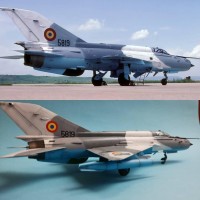 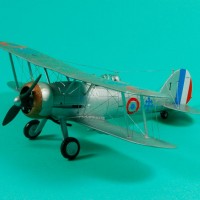 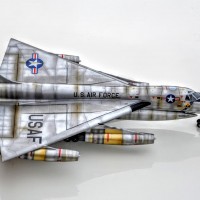 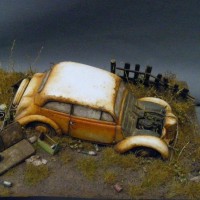