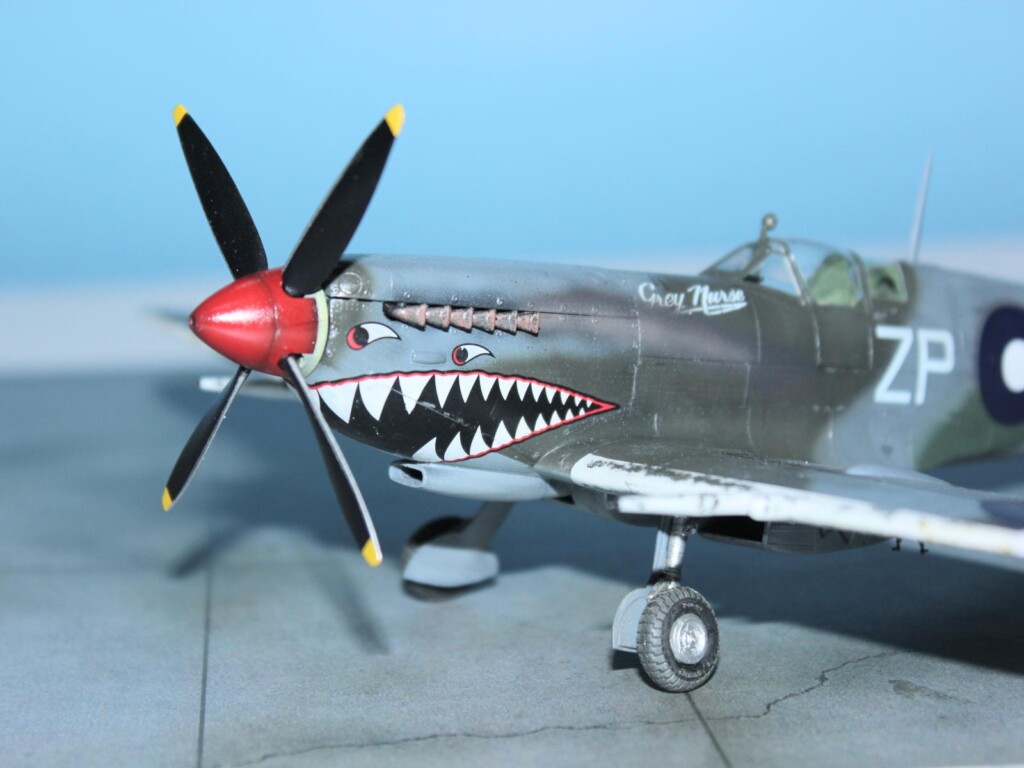 This model represents the mount of Flt. Lt. Stanley George Scrimgeour (known as George) of 457 Sqn on 20th June 1945. By the time the Mk. VIII entered service with the RAAF in early 1944, the IJNAF and IJAAF were spent forces in the southeast Pacific. Very few contacts were made with the enemy and this aircraft was one of the few of the marque to achieve a kill in RAAF service.

457 Sqn was formed in the UK in 1941 under Article XV of the Empire Air Training Scheme. It was a RAAF squadron under RAF control and was equipped with Spitfires. (RAAF squadrons created under this scheme were numbered from 450 Sqn to 467 Sqn). In June 1942, 457 Sqn was transferred to Australia as part of Churchills promised “Spitfire Wing” along with 54 Sqn RAF and 452 Sqn RAAF.

Initially equipped with Spitfire Mk. Vcs, they reequipped with the Mk. VIII in July 1944 while still operating from Batchelor Strip south of Darwin. Flt.Lt. Edward ‘Ted’ Sly, who had served in the Western Desert with 450 Sqn RAAF, was inspired by the Kittyhawks of 112 Sqn RAF to paint a shark mouth on his aircraft. The squadron armourers quickly made a template and soon all the squadron aircraft were adorned with shark mouths. The squadron soon became known as the ‘Grey Nurse Squadron’ after the fearsome predator of the Pacific Ocean.

On the 17th of June, 1945, they deployed to Labuan Island just off the northwest coast of Borneo to support Australian operations in the area. The Japanese sent a Mitsubishi Ki-46 Dinah reconnaissance aircraft to see what the Australians were up to on the 20th and two Spitfires were scrambled at 1835, piloted by Flt. Lt. Campbell (flying A58-620, ZP-M) and Flt. Lt. Scrimgeour. Scrimgeour’s normal mount was A58-604, ZP-D, but on this occasion, he was flying A58-631, ZP-V.

Intercepting the target over the mainland, Campbell attacked first, with no visible effect, followed by Scrimgeour who set the port engine on fire. Both pilots re-attacked and set the starboard engine on fire. They followed the Dina down to see it crash and explode. Campbell and Scrimgeour shared the kill.

It was Campbell's third victory and Scrimgeour's second, his first being a probable while flying a Brewster Buffalo with 453 Sqn over Kuala Lumpur, Malaya, on the 22nd of December 1941. This gave Scrimgeour the record for the longest time between claims of any RAAF pilot in the Pacific.

This build is the second of the Mk. VIIIs from Eduard’s “Aussie Eight” dual combo boxing and was built in parallel with, although painted and finished a little after, the first (https://imodeler.com/2022/01/supermarine-spitfire-mk-viii-hava-go-jo/).

Built in parallel with its twin, the build was straight forward with the same issues.

This time, however, I decided to add a slipper tank as they were often use on missions, although it is not mentioned in the instructions. I also decided to close the canopy on this one to preserve the sleek lines of the aircraft.

At the time of the mission flown by Scrimgeour, A58-631 had the standard squadron markings of a large shark mouth, ace of spades on the rudder, red spinner and white wing leading edge theatre markings. The original shark mouth as designed by Sly was a narrow and arguable shark-like design. Some time around March-April 1945 the design was changed to a larger shark mouth. This was achieved by overpainting the original mouth which then required the shark eyes to be relocated higher and further forward, just behind the spinner. The old eyes would then have been overpainted.

A58-631 is perhaps unique in that, after the new mouth was added, the original eyes were not overpainted, resulting in a four-eyed shark!

The kit instructions show the aircraft in a later scheme than it would have had at the time of the June mission, with white leading edges overpainted with RAAF Dark Sea Grey, a Sky spinner and a RAAF Light Blue fuselage band. However, the accompanying book contains three photos and a side profile of the aircraft in the earlier scheme and I used these when painting my model. These pictures show worn white leading edges, a red spinner, an overpainted RAF fuselage band and worn white overpainting of the red portion of the RAF fin flash.

The instructions show the aircraft with the smaller upper wing rondels but I wanted to use the large, RAF dimensioned rondels. Not being able to find conclusive photographic evidence either way, I surveyed all the photos I could find and determined that they were approximately 50:50. So, I decided that the large roundel was appropriate.

So, as for the first build, and after pre-shading with black, I painted the fuselage roundel area with RAAF Dark Sea Grey and Foliage Green following the RAF camouflage pattern. These areas were then covered using the masks that Eduard kindly provides to give the end effect of the RAF markings having been over-painted with RAAF colours. Next, I painted the RAF camouflage scheme as per the kit instructions and included the standard yellow wing leading edge and Sky rear fuselage bands.

In order to remove the serial number and fuselage stripe, the RAAF overpainted the rear fuselage with RAAF Dark Sea Grey and RAAF Foliage Green, following the original Ocean Grey/Dark Green pattern. However, the photos of the aircraft show that the paint covering the Sky fuselage band was quite worn along the top of the fuselage, so I used masking fluid to replicate this before overpainting it with the RAAF colours.

I also used masking fluid to replicate the areas where the red of the RAF fin flash show before masking off and overpainting this with white.

The theatre markings on this aircraft were restricted to the white wing leading edge and the photos show these to be quite worn. As for the first build, I used the "salt method" to replicate this effect.

After a gloss coat I decaled the aircraft.

The shark mouth is provided in four parts with the central two parts having to conform around the highly convex surface of the lower nose. This proved to be beyond my abilities, so I cut slits in the central black of the mouth to allow them to conform. This resulted in overlapping decal that I did my best to smooth out. I would much have preferred it if the central black had been omitted and this section painted black before application of the decal teeth.

Otherwise, the main decals performed flawlessly, conforming over the bumps on the wing without issue. However, the many of the stencils silvered, as they also did for the first build.

The propellors on the Mk. VIII were made from compressed wood with a protective metal leading edge. Normally, the whole blade was painted black with a yellow tip. One of the photos in the accompanying book gives a clear view of the propellors for A58-631 and these show the leading edges to be unpainted, natural metal, so I painted mine that way.

Then I added a black wash to dirty things up a bit and added scratches and dings to the engine panel fasteners, wing gun hatches and the wing roots before applying a matt coat.

The final step was to remove the cockpit and under wing and fuselage formation light masks and paint the latter clear red, green and a mixed orange. I didn't forget the wingtip formation lights which were first painted chrome silver and then clear red/green.

Even though I used the same paints, the aircraft came out a noticeably darker than for the first build – perhaps because I didn’t add a layer to fade the paint this time.

As noted above, this is the second of the dual combo build, and the day after I finished this kit I bought another Aussie Eight boxing at a club swap meet. 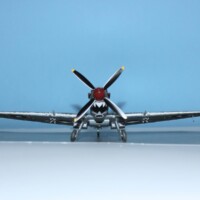 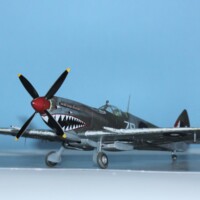 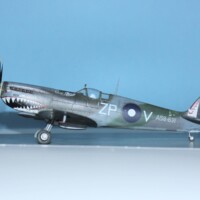 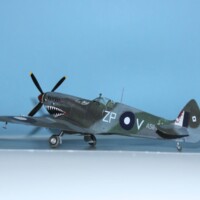 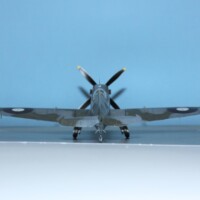 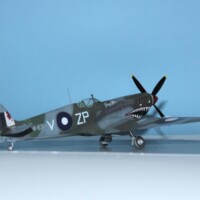 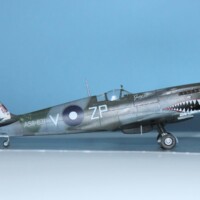 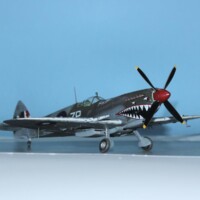 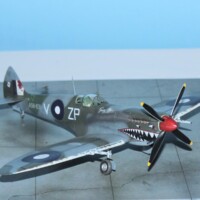 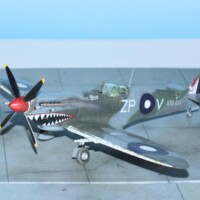 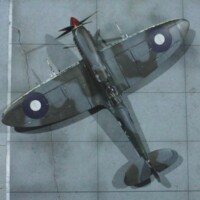 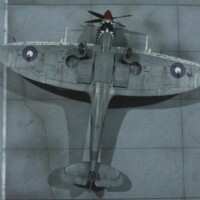 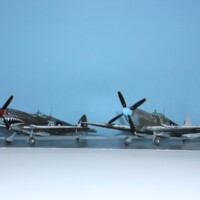 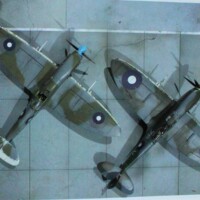 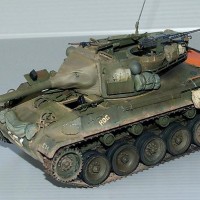 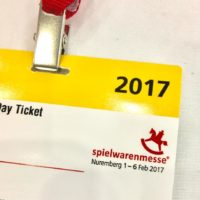 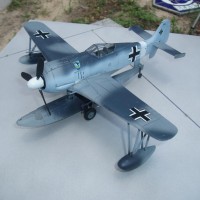 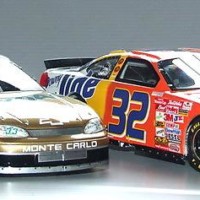