A further demonstration from Ron's Skyshark of how good Dynavector vacuforms are. This being the Dynavector 1/48 deHavilland Hornet F.1, which I think is one of the best looking twin piston engine airplanes ever made.

The initial concept of the D.H.103 design was a scaled-down single seat version of the Mosquito, capable of meeting single engined Japanese fighters in long-range combat among the islands of the South Pacific. Rolls‑Royce Ltd. developed special Merlin power plants of minimum frontal area for the aircraft, which permitted an exceptionally sleek installation. Permission to build was not received until June 1943 when the D.H. 103 ceased to be a private venture and Specification F.12/43 was written round it. At this time it was named "Hornet."

The Hornet was an entirely new design, sharing with the earlier Mosquito only the method used for manufacturing the slim, oval section fuselage. The one piece. two spar, cantilever laminar flow wing was designed to high strength factors and consisted of a composite wood and metal internal structure with a stressed birch ply double upper skin and an undersurface of reinforced Alclad. The Hornet was the first aircraft in which wood was cemented to metal - a unique method of construction only possible by using the revolutionary new Redux adhesive.

Piloted by Geoffrey de Havilland Jr., the first prototype - RR915 - flew for the first time on July 28, 1944, only 13 months after the commencement of detail design. Estimated performance was met easily; maneuverability and climb were exceptional and the prototype reached 485 mph. With two 200 gallon drop tanks under the wings, the Hornet had a range of over 2,500 miles cruising at 340 m.p.h. at 30,000 ft.

Production of the Hornet F. Mk. 1 began at Hatfield late in 1944; the first aircraft, PX210, was delivered February 28, 1945 but the war with Japan was over before any Hornet-equipped unit reached Initial Operational Capability. The production Hornet was only marginally slower than the prototype, with a top speed of 472 mph at altitude and was capable of an astounding 400 mph at sea level.

64 Squadron - the first equipped with the Hornet - took part in the Victory Fly Past over London on June 8, 1946. 19 Squadron received Hornets at Church Fenton that October, with 41 and 65 Squadrons similarly equipped in following months. On May 20, 1948, 65 Squadron was chosen to fly to Uppsala to pay an official visit to the Swedish Air Force. On September 15, 1949 one of two Hornets which was to participate in Battle of Britain celebrations at Gibraltar was flown from Bovingdon to Gibraltar by F/Lt. H. Peebles at an average speed of 357.565 mph, which set a British point-to-point record. On the return journey September 19th, Group Captain A. C. P. Carver flew to Bovingdon under strict cruise control at an altitude of 25,000 feet in 2 hours, 30 minutes, 21 seconds, and landed with 15 minutes fuel, setting a new record of 435.871 mph.

De Havilland test pilot G.H. Pike came third in the High Speed Handicap Race at 343.5 mph in F.Mk.1 PX224 at Lympne on August 31, 1946. Reading this, one can only think what a sensation the Hornet would have been in the post-war Thompson Trophy Races.

Dynavector’s Hornet was the first 1/48 kit of this airplane to be produced, back in 1998. The kit’s only drawback to many modelers was that it was a vacuform. In 2003, Classic Airframes released a series of injection-molded Hornets, which are now out of production. Sadly, the Dynavector kit is now also out of production, though you can find it if you look around.

The kit comes on two plastic sheets, and provides the larger vertical fin and horizontal stabilizers for the Hornet F.Mk.3, as well as the smaller tail surfaces for the F.Mk.1. The landing gear, propellers, and cockpit interior are done in white metal, with the major airframe parts as vacuform pieces. Decals include an F.Mk.1 of 65 Squadron in “high altitude” camouflage, a silver F.Mk.3 from the same unit, and a camouflaged F.Mk.3 of 33 Squadron serving in the Malayan Emergency. Two very clear vacuformed canopies round out what's in the box.

With any vacuform, construction starts with taking the parts off the sheets. I score around the parts with a X-acto, then pop them off. The kit comes with the larger F.Mk.3 vertical fin as part of the fuselage molding, so this had to be cut off.

Once the parts were loose, I took an afternoon and sanded them down. One good thing about Dynavector kits is the plastic is soft enough that this process can be done quickly; the downside to that is you have to be careful not to sand away too much. I was able to create wing and tail parts with nice thin trailing edges.

The cockpit area is easy to do with the white metal parts, and it is then painted black. I used the extra instrument panel decal from the Xtradecals sheet for the Vampire, since the two aircraft used identical instrument panels. I made the Sutton harness with lead foil from a wine bottle, and then closed up the fuselage.

The wings were easy to attach with the mounting mold on the fuselage, and the horizontal stabilizers were easy to attach to the spar provided in the kit. The only hard part to this was filling in the open area on the rear fuselage where the fin had been attached. I filled that with cyanoacrylate glue, zapped it, sanded it smooth, then attached the vertical fin.

Applying Mr. Surfacer 500 to all the joints had everything nice and smooth and I finished off by rescribing lost panel lines and attaching the canopy in the closed position -being very clear, it’s easy to see the cockpit, and to me opening the canopy destroys the sleek lines of the Hornet.

I then assembled the white metal landing gear and installed it in the wheel wells. At this point, I realized I should have put some weight in the rear fuselage, since the model was getting nose-heavy with the white metal cockpit and landing gear, and the propellers and spinners to come. It does sit on its tail, but if I tilt it forward it will also sit on the tips of the props, due to the center of gravity being so far forward.

I painted the model with SNJ Aluminum paint, and then gave it a coat of ModelMaster Metalizer sealer, which gives the SNJ paint the appearance of aluminum dope, which is what the Hornet was painted with. I used the Classic Airframes markings for an F.1 of 64 Squadron, which went down with no problem.

I unmasked the canopy, and attached the main wheels and propellers, and the exhaust stacks. As the Squadron Commander’s airplane during peacetime, this Hornet was kept in immaculate condition, so I did not do any further weathering.

I recall this vacuform being easier to build than the Classic Airframes Hornet F.3 and Sea Hornet F.21. 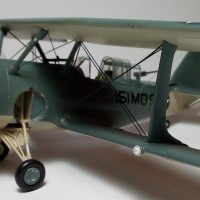 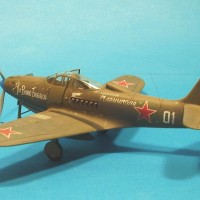 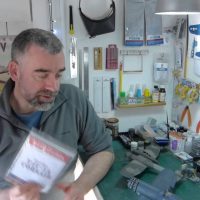 An update on the big Corsair and the less big Blohm & Voss! 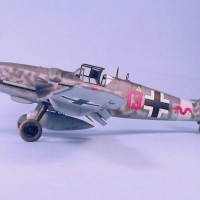