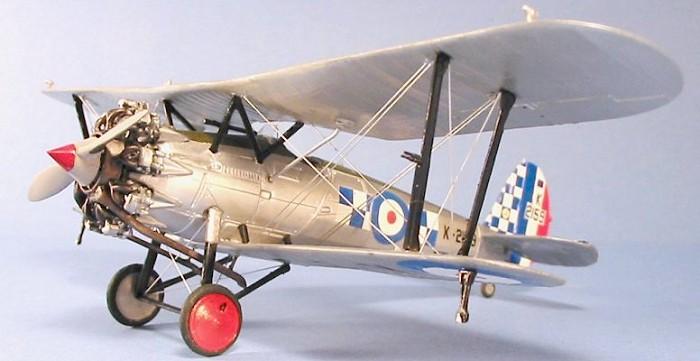 This model was done in around 2003, having been purchased a couple years earlier. Finding the SMER kit with the better decals at an "aftermarket decal sheet price" prompted me to pull the kit out of the closet and proceed.

The Bristol Bulldog was the result of an Air Staff specification of 1924 that was modified in 1926, that called for a high-speed, fast-climbing biplane long-range fighter, capable of both day and night operation, though it would see primary use as a day interceptor while the Siskin would serve as a “night fighter.”

Designed by Bristol’s Chief Designer Frank Barnwell, the prototype of the Bristol Bulldog Mk II - there was no Mk I produced, since it had been a response to the original specification - first flew on January 21, 1928, with Bristol’s Chief Test Pilot Cyril Uwins at the controls. The airplane’s chief competitor was the Hawker Hawfinch, which would be further developed into the Hawker Fury the next year.

Having won the evaluation, the newly-named Bulldog was ordered into production, with a first batch of 25 aircraft entering service with 3 and 17 Squadrons the same year.

Powered by a Bristol Jupiter VIIF radial engine producing 440 h.p., the Bulldog IIA had a maximum speed of 174mph. The Bulldog’s superb maneuverability and ease of handling made it very popular with its pilots. The airplane was roughly similar to the Boeing P-12/F4B series in overall performance.

A total of 441 Bulldogs of all marks were produced for the RAF. Due to its cheap sales price, several foreign customers ordered Bulldogs, including Sweden, Siam, Latvia, Japan, Denmark and Finland, with one Bulldog tested by the US Navy. The Finnish Bulldogs fought the Soviets during the Winter War, while the Spanish aircraft served at the outset of the Spanish Civil War on the Republican side.

The RAF’s Bulldogs experienced a quiet peacetime career, being phased out between 1933 and 1937, in favor of the Hawker Fury or the Gloster Gauntlet and Gladiator. Once removed from frontline service, many were modified to two-seat trainers.

In 1931, Flying Officer Douglas Bader of 23 Squadron accepted a dare from a group of civilian pilots to show that a heavy Bulldog could be rolled on takeoff. He attempted the maneuver a few seconds too soon after liftoff, digging a wingtip into the ground and somersaulting the airplane into a pile of wreckage. Dragged from the wreck unconscious, he awoke in the hospital a day later to discover his legs had been amputated. His lifelong career to overcome the result of this disability made him a legend.

The Bulldog is one of four models of RAF between-the-wars fighters that were originally released in the early/mid 1960s by the British company Inpact. The molds were later acquired by other model companies and the kit was released throughout the 1970s, ‘80s and ‘90s by Pyro and later Lindberg (and can still be found in its Lindberg boxing). The kit should definitely be distinguished from the even-earlier Bulldog released by Merit, which is thoroughly inferior in design, molding and result; this kit, which has been re-released over the years by SMER, was re-released with an excellent sheet of decals. At a retail price of about $7.00, this kit is worth buying for the decals alone, to be used on the Inpact-Pyro-Lindberg kit, which is still of excellent quality 40 years after its first release. The Lindberg decal sheet is a 23 Squadron airplane, making a good candidate to do Bader's airplane, but the decals suffer from incorrect colors of red and blue.

I began construction with the cockpit, using some Evergreen rod to simulate the internal structure. I didn’t have any detailed drawings or photographs, so what is there is “just for looks.” After making a Sutton harness from lead foil and attaching it to the seat, I closed up the fuselage, which fit well and did not need any filler to get rid of the centerline seam. I then glued the two-pat upper wing together, having carefully cleaned up the parts to insure a clean joint. Once glued together, I flooded the seam with liquid glue to fill it. I cut the elevators free from the horizontal stabilizers and posed them “drooped.”

After attaching the tail to the fuselage, the model was ready for painting. I first painted the black anti-glare area on the upper fuselage, then masked it. I also painted the struts and landing gear black and set them aside. The rest of the model was painted with SnJ Aluminum, and I finished off by using the SnJ aluminum polishing powder on the metal panels of the forward fuselage and the gas tank area of the lower surface of the upper wing, polishing them out. While all that was drying, I painted the engine parts with various ModelMaster metalizer colors, sealed them and assembled the engine.

I used the decals from a recent SMER re-release of the ancient Merit kit of the Bulldog, to do the Squadron Commander’s airplane of 19 Squadron, circa 1931. This is one of the most colorful markings options the Bulldog ever appeared in. The decals for the most recent Lindberg release are completely unusable, with the national insignia and squadron insignia being printed in World War II colors. Some of the Pyro releases have decals that will still be good, but the original Inpact decals are too thick to begin with and at around 40 years old, are now so brittle they will only fall apart if one attempts to use them. The SMER re-release Bulldog can be found on eBay and at dealer's tables now. The excellent decal sheet is in the right colors for pre-war markings, and provides these markings used here as well as squadron markings for a Bulldog from 17 Squadron, one of the original units to operate this airplane. 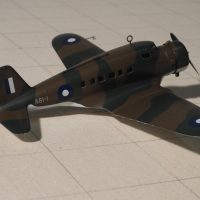 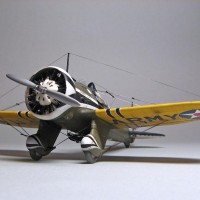 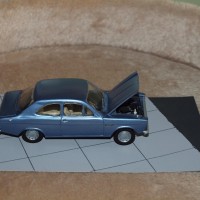 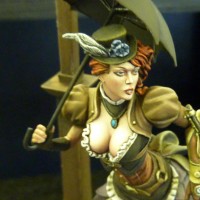