The Vought F-8 Crusader has always been a favorite of mine. It has to me some of the same classic look as the Hawker Hunter does. And it was one of the greatest Navy fighters ever, a fitting jet descendant of the famous Vought F4U Corsair. Vought’s designer, John Russell Clark, did a great, inspirational job on the Crusader, as Rex Beisel did on the Corsair (which Clark also worked on). I remember reading somewhere, that during it’s heyday, the F-8 was the Western fighter the Soviet Union feared the most.

This is another of my builds from way back, using the Monogram kit, which to me is still a pretty good product, and once again, at a fraction of the cost of the Hasegawa kit. Even better if you already have 3 more in your closet that you bought years ago!

The model depicts (I believe!) an F-8E flown by Commander Dick “Belly” Bellinger, who became the CO of VF-162 “The Hunters”, aboard the USS Oriskany, during the Vietnam War. Bellinger was the first Navy pilot to shoot down a MiG-21, on 9 October 1966, though possibly not in this aircraft. Although I’m not sure about that, as the old Squadron In Action book on the F-8 has a nice painting by Lou Drendel on the cover that shows this F-8E “202” of 162 Squadron shooting down a MiG-21, but no info inside about the painting!

The decals I used were from the 1/48 ESCI kit of the F-8. That kit was inferior compared to the Monogram, and I never made it. But I used the decals because I wanted to do an aircraft Bellinger had flown. I remember that the ESCI decal sheet had an amusing error, they spelled “ORISKANY” as “ORYISCANY”. So I removed the 1st “Y”, and applied the name in two parts!

Anyway, I don’t remember any real problems with the build. I did use an aftermarket ejection seat (I think it was metal, maybe Aeroclub?), as I seem to recall the kit seat was not correct. Also, there is supposedly a problem with the stance of the main landing gear, and I attempted a fix on this, which was partially successful. I have an aftermarket kit that corrects this, which I will use on the next one. Also have another conversion kit to add underwing fuselage detail when raising the leading edge of the wing (one of the F-8’s unique features), and also to mount the leading edge slats in a deployed position. I guess I can make a better F-8 with this extra stuff, without having to buy a mega cost Hasegawa kit.

PS: I am a big fan of Russian aircraft, and in a book on MiG by Bill Sweetman, in the chapter on the MiG-25 Foxbat, he credits the design of the F-8 Crusader as being inspiration for North American’s A-5 Vigilante, which then greatly influenced the design of the MiG-25 Foxbat. It has to do with the high shoulder mounted wing, and slab sided fuselage. The MiG-25 is a fascinating aircraft, and so is the F-8 Crusader (and the A-5 Vigilante). It is interesting how aero design trends can (or could) affect new aircraft designs in different countries simultaneously. 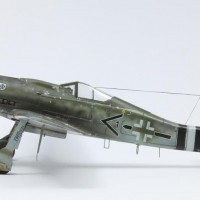 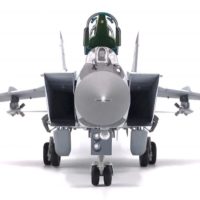 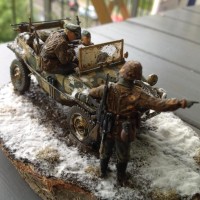 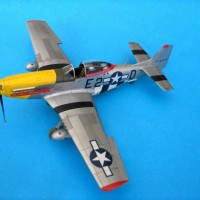