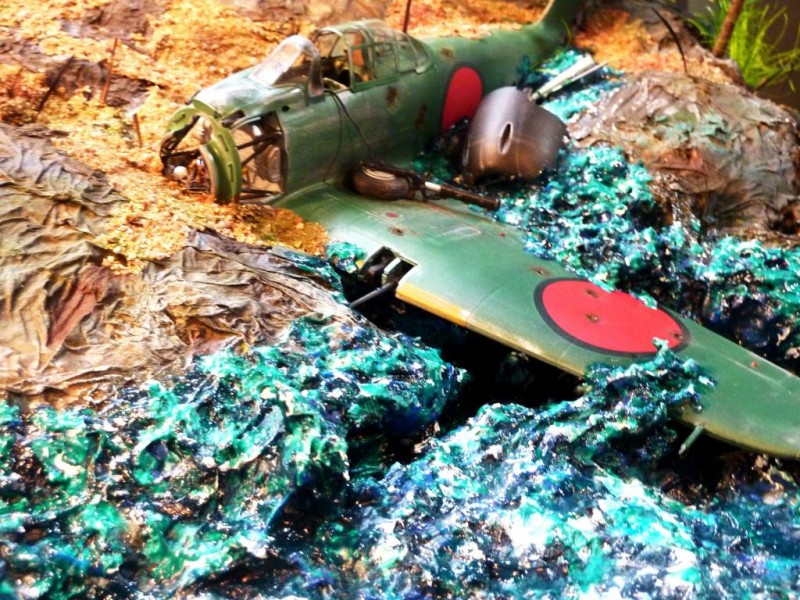 This Pacific-themed diorama includes both kit- and scratch-built items.

The aircraft is Tamiya’s 1/32 Zero. It’s made two appearances here in previous incarnations; from its present state, this is likely the last. The Marine figures are 1/35 resin offerings from Evolution Miniatures. The jungle plants are a large mixed set from Fields of Glory.

The landscape has a framed base, through which holes have been drilled and screws of various lengths pushed from beneath and glued in place. String has been wound randomly around between the posts to create a ‘cat’s cradle’ effect. I used insulation foam to build-up the contours. The product comes out of the pressurised can in a semi-viscous state and expands as it dries. It was applied into the strung-post area, which effectively fixed it to the base. I used a narrow saw blade to shape the scene. Over this surface, small pieces of tissue were dabbed into place with a white glue-and-water mix. I moved these a little while wet to create an uneven look to replicate the dried lava effects seen on many atolls. The base colours were applied from the Vallejo range, mainly browns, greens, and blues, lightened or darkened as required to create a tonal variation. A variety of sands was added and coloured-in with weak washes of green and brown.

The water effects began with the tissue application, which also worked to create an underlying ripple effect on the surface. To create the breaking waves along the shore, I used a ‘deep gap’ filler as found in hardware stores. It’s very thick, but porous, and with a small brush or thin stick can be manipulated into rounded, curled wavelike shapes. In the flat areas I glued tufts of cotton from cotton-wool balls here and there to add surface texture.

The water was painted with a base coat of artists’ Heavy Gel Acrylic (Thalo Green). I then added the Thalo Green to artists’ Heavy Structure Gel – a thick, milky-looking paste. This mixture allows the colour to appear in different intensities within the Gel as it’s applied. It was also worked along the cotton tufts where the combination of cotton and paint raised these areas from a flat profile. Other greens, blues, and whites were added randomly to affect swirling Pacific waters in shallow areas.

When dry, the water areas were over-coated with gloss Mod Podge, a craft medium that’s also of a thick consistency and is simply applied with a brush to dry brilliantly clear and shiny. I decided that the water should spill over the leading edge of the frame to give a more immediate effect and hopefully to draw-in the viewer.

The palm trees are handmade. For the trunks, I used old pine stems of various lengths and diameters. The fronds are bird feathers, mainly dove and rook feathers I collected from behind my house. I used a sharp scalpel blade to distress the edges to make them more uneven and plant-like in appearance. Only the feather tips were used. They were super-glued to the stem tips, and each complete unit was sprayed with Tamiya primer and hand-painted with Vallejo acrylics. This was a useful exercise, as a pair of uniform-looking, scale palm trees costs about £20 from suppliers. Here, I have a variety of tree ages and a mix of conditions and wear, effectively at no cost.

With the aircraft, the engine and starboard wing were removed and various effects added to indicate combat damage. A few engine bay cables/wires were added, and also a human skull as a ‘momento mori’.

I mentioned the Marine figures earlier. These were painted with Vallejo acrylics. Excepting the water, everything was dusted over with Testors Dullcote to finish.

20 responses to All Washed-Up 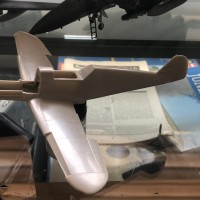 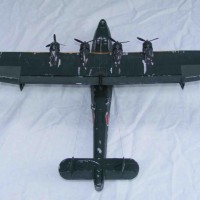 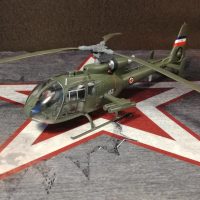 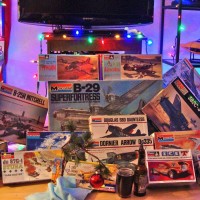 A Monogram Holiday portrait, my latest Blue Box find, and a Phantom update