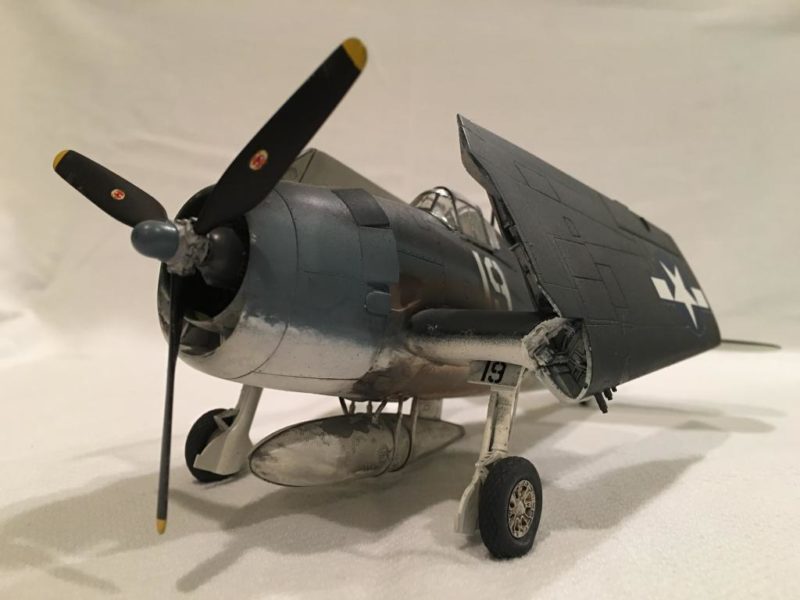 Here tonight is my Grumman F6F-3 Hellcat which was modeled in the markings of the US Navy Ace Alex Vraciu. Sadly this hero passed away on January 29, 2015.

Vraciu ended the war with 19 aerial victories and 21 more planes destroyed on the ground. He participated in the Marianna's "Turkey Shoot" where he shot down 6 Japanese aircraft in a matter of 8 minutes. During this encounter he only used 360 rounds of .050 caliber ammo... Do the math. 60 rounds per weapon. It doesn't take too long for "Ma Deuce" to eat up that amount of ammunition. I can tell you that first hand from my days in Armor. (100 round .050 caliber ammo boxes don't last that long... even at 3-5 round bursts). Hellcats carried 400 rounds per gun.

This model is the Hasegawa kit. I upgraded it with the Danger Boy wing fold, Cutting edge "Corrected" cowling and prop, True Details resin cockpit and bulged tires. Some of these items are no longer available through the original manufacturer. I believe they have been back on the market under different company names.

I had a crazy idea when I built this plane. I wanted to replicate the effects of spilled fuel and engine oil on paint. Sometimes it peels the paint away exposing bare metal underneath. It has the same effects as paint stripper and causes the paint to sometimes wrinkle up before falling away. Check out the stained drop tank...

I did this by painting the drop tank bare metal using Testors Metalizer paint. Then I sprayed the base color in white. Next I literally dropped excess paint thinner on the finish which exposed the bare metal underneath. It also wrinkled the finish. Once everything dried, I gave it a wash using a diluted mixture of black and gray to add detail and give the appearance of leaking engine oil.

I then mixed up some brown to act as exhaust stains. The high lead content in the AV gas gave the exhaust a brownish appearance, and is commonly seen in photos of American planes after they have returned from a flight. On the Port side exhaust stain, I wiped away a small section towards the trailing edge, revealing the cleaner white undersurface, as if the ground crew had started to clean. This "cleaned" area is next to the Port inboard flap.

Lastly I added three photos of the man himself...

I sprayed this one using my Testor's Aztek 470 using the tan tip for weathering and demarcation edges of the tri color camouflage. 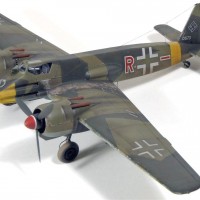 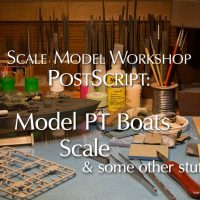 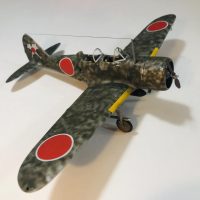 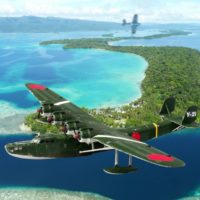