Like Monogram, Revell responded to the breakthrough success of Testors’ F-19 Stealth Fighter with a “Could Be…” Stealth model of its own. Only in this case, the plane was the long-rumored B-2 Stealth Bomber.

Working from known flying wing technology and the accepted requirements of Stealth designs, the engineers at Revell developed this smooth, low-profile, tailless bat-wing design. Their predictions were fairly on the mark; the actual B-2 turned out to be roughly the same shape and scale as Revell’s kit — but far more angular.

Released just one year before the actual B-2 “Spirit” was unveiled to the public, Revell’s ATB experienced poor sales. Since the actual B-2 was revealed just a year after this kit hit store shelves, the design was proved hypothetical almost as soon as it arrived. The Revell B-2 Advanced Technology Bomber remains a Reagan-Era concept classic along with Testors’ and Monogram’s F-19s.

Only three model companies have released a 1/72nd scale B-2 bomber kit. The first two kits were purely conceptual. Model Technologies released a vacu-form kit of the ATB. Molded in black plastic, this kit features an upper and lower one piece triangle halves and included metal landing gear and a few injection parts. Revell was the first to release an injection molded kit of the ATB, neither kit was remotely close to the actual B-2A. Finally, in 1991, Testors released the actual B-2A Spirit kit.

The kit contains 69 parts molded in a charcoal gray plastic and a clear windscreen. Dimensions of the kit when completed are a length of 14 7/8 inches with a wingspan of 26 ½ inches.

I have attempted this kit three times prior to this one. The first time was when the kit was initially released. I was 17 years old and wanted to be the first person in the model club with a stealth bomber! How cool would that be parked next to a Monogram B-1! Needless to say, that never happened. Through a combination of being impatient and a lack of skill, this one ultimately ended up in the trash heap.

The second attempt was when I was in the Air Force. A next door neighbor had one partially built and gave it to me because he was tired of fighting with it. I had it just about complete, but a move to Texas sealed its fate.

In 2006, I picked one up on eBay and this was it! I knew all the ins and outs of building this kit. This was going to be the perfect what-if. The kit was complete, painted and decaled. The landing gear is fragile on this kit and one of the main landing gear struts broke. It was done.

At first glance, you can see that Revell borrowed from other aircraft. The landing gear in this kit looks like an exact copy of the Monogram B-1 kit, as well as the ALCMs.

The overall construction of this kit is straight forward. Although, after a few build attempts, I did learn that you have to glue the wings on the center section, top and bottom. Then once that is done, glue the top and bottom halves together. This eliminates the step you would get if you had followed the instructions.

The main landing gear, in my opinion, is very fragile. If I were to do this kit again, I would scratch build different wheel wells and put a different main landing gear arrangement on it, something a little more robust and stable.

The kit comes with six ALCMs, although I only put one in each weapons bay. You can’t see them anyway, so I figured one was enough.

I had decided that I didn’t want to do the overall flat black paint scheme that was depicted on the box. On the most recent attempt of this model I had painted it like an early B-2 with the overall FS36118 gunship gray with the flat black leading edge. I had contemplated doing that again, but I had a “been there, done that” attitude when it came to painting it again. Besides, it looked too much like the actual B-2A.

I found a picture on the internet of a conceptual drawing of the Advanced Technology Bomber in an two-tone gray paint scheme. That picture fit the idea of what I was going for with this model with its multiple shades of gray.

The paint scheme is as follows:

All of the decals came from the spares box and place in what would be called “their accepted positions.”. The majority of the markings came from a spare 1/48 Italeri F-22 sheet. The tail numbers and some stencils came from the Italeri B-2A sheet. The Marvin the Martian art on the nose gear door is from a TwoBobs 1/32 F-16 Fighting Fulcrums sheet. 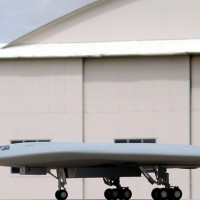 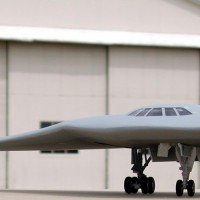 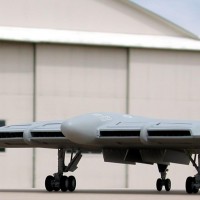 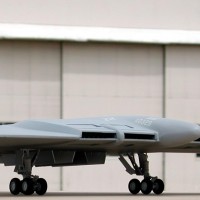 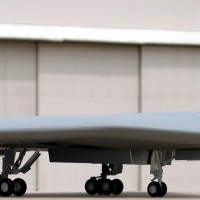 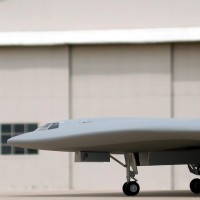 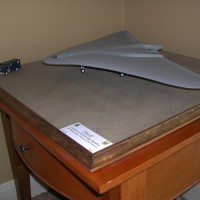 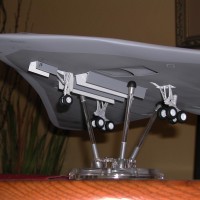 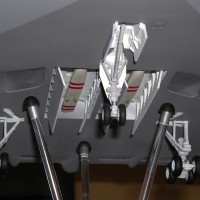 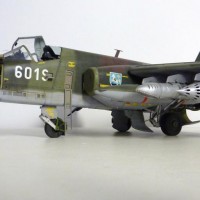 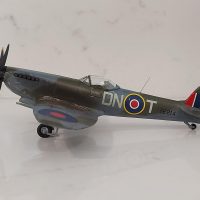 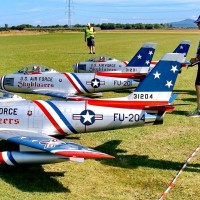