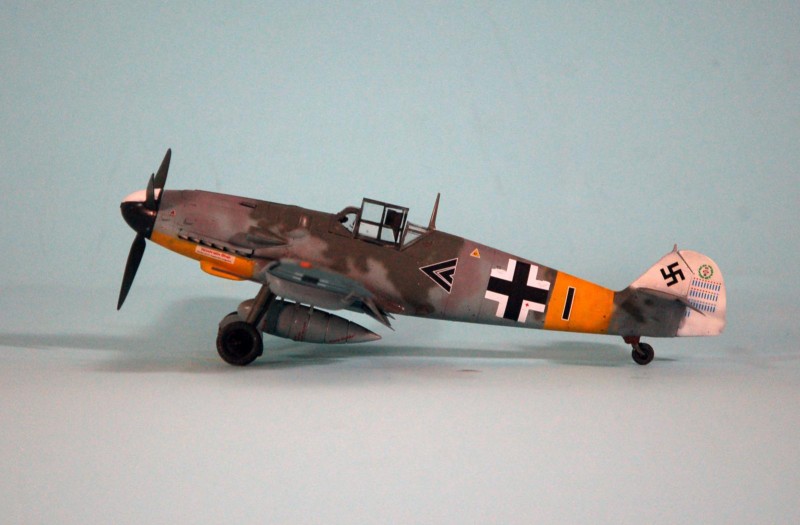 The Luftwaffe decisively defeated the U.S. Eighth Air Force daylight bombing offensive during the second Schweinfurt mission of October 14. 1943. Of the 291 bombers sent on the mission, 60 were lost outright, another 17 damaged so heavily that they had to be scrapped, and another 121 had varying degrees of battle damage. The 60 bombers lost represented over 26% of the attacking force. Aircrew losses were equally heavy, with 650 lost of 2,900, 22% of the crews. The American Official History of the Army Air Forces in the Second World War acknowledged losses were so heavy that "The fact was that the Eighth Air Force had for the time being lost air superiority over Germany."

Fortunately for the USAAF, the weather over northwestern Europe closed in the next day, making it impossible to mount a deep-penetration raid until mid-December 1943. During the 64 days between those missions, no missions were flown over Germany that could not be provided fighter escort, and in fact, only five missions were flown due to the weather.

Eighth Air Force put those two months to good use. The 55th Fighter Group, equipped with long-range P-38s, was declared operational the week after Schweinfurt and a second P-38-equipped group, the 20th Fighter Group, was declared operational in early November. In the meantime, the P-47 Thunderbolts already in theater were modified with wing pylons and plumbing that allowed them to carry two 108-gallon drop tanks, extending their range over Germany by 185 miles beyond that which had been added in August with the adoption of belly tanks. All new-production P-47s came from the factory with the drop tanks and plumbing installed.

Most importantly, the USAAF finally recognized that the Merlin-powered P-51B Mustang was in fact the long-range escort fighter they had been searching for. The first two fighter groups to get the Mustang, the 354th and 363rd fighter groups, were part of the tactical Ninth Air Force, as a result of air force blindness that the new Mustang was not the Allison-engined low altitude fighter. Fortunately, both groups were assigned for operations to the Eighth Air Force and the decision was made to equip Eighth Air Force fighter groups with Mustangs while the Ninth would use the P-47, a far better fighter-bomber than the Mustang ever would be due to its radial engine. The newly-arrived P-51-equipped 357th Fighter Group was reassigned from the Ninth to the Eighth Air Force in exchange for the Eighth’s P-47-equipped 368th Fighter Group in January 1944 and other groups were scheduled for re-equipment as more P-51s arrived in-theater.

While this was happening, the Eighth Bomber Command tripled in size as newly-arrived groups were declared operational. By January 1944, there were more than 800 B-17s and B-24s in England.

It was just in time. The allied command had directed the USAAF to attack the German aircraft industry at the Casablanca Conference in January 1943. Under Operation Argument, the plan was that the German Luftwaffe would be defeated 60 days before the cross-Channel invasion, which was now set for the first week in June.

General Ira Eaker, who had commanded Eighth Air Force through its expansion, was “kicked upstairs” and made Allied air commander in the Mediterranean Theater, while Twelfth Air Force commander James H. “Jimmy” Doolittle took command of Eighth Air Force. Doolittle changed the strategy to kill the Luftwaffe to use the bombers being sent against the aircraft industry targets as bait to draw up the defending fighters, to be shot down by the escorts. The strategy of “close escort” was abandoned in favor of putting the fighters on the offensive, assigned to break up German formations before they could make an attack on the bomber stream. All that was needed was a week of good weather to mount “high intensity” raids. In the meantime, missions of ever-increasing size were flown as the terrible European winter weather allowed through January and early February 1944. Additionally, in November 1943, the Fifteenth Air Force was declared operational in Italy. The plan to create a “two front” air war was nearing reality.

The Jagdwaffe was already stretched beyond its means, with heavy losses taking place in the Mediterranean following the invasions of North Africa, Sicily and Italy, as well as major losses in the massive battles on the Eastern Front in the summer and fall of 1943 following the defeat at Stalingrad. A newly-graduated Luftwaffe fighter pilot now arrived in his unit with less than 150 flying hours total, and many with less than that, while their experience in the Bf-109 and Fw-190 were less than 20 hours per pilot. Their American opponents arrived in England with over 500 hours of training, including 150 hours in the fighter type they were assigned to fly. In another two months, Eighth Fighter Command would outnumber the Reichverteidigung (Reich Defense Force) units assigned to the defense of Germany.

The experienced pilots the Jagdwaffe needed in leadership positions were fewer and fewer with these losses in the past two years. Among those few leaders was Hauptmann Anton “Toni” Hackl, a 124-victory experte who had started as a Feldwebel. After scoring 118 victories on the Eastern Front, he had been awarded the Knight’s Cross and a promotion to Leutnant, and was Staffelkapitän of 5.II/JG 77. He scored an additional six in North Africa when JG 77 was transferred from the Eastern Front after the American invasion of North Africa, before being severely wounded in the head and right hand in combat with P-38s on February 4, 1943. After recovery, he had been promoted to Hauptmann and assigned as Gruppenkommandeur of III/JG 11 on October 1, 1943. JG 11 was responsible for aerial defense of northern Holland and the German Bight, directly on the main route of entry for Eighth Air Force raids. By early February, Hackl’s score stood at 134, including eight 4-engine bombers. JG 11 as a unit was operating at 60% of authorized strength as of late January.

Finally, on February 20, 1944, the weather cleared. Over the next six days, the Eighth Air Force flew missions against airframe manufacturing and assembly plants in Leipzig, Brunswick, Gotha, Regensburg, Schweinfurt, Augsburg, Stuttgart and Steyr. During the six days, Eighth Air Force bombers flew over 3,000 sorties and the Fifteenth Air Force more than 500. The raids dropped roughly 10,000 tons of bombs.

For this, the Eighth Air Force lost 97 B-17s and 40 B-24s shot down by flak and fighters, and another 20 scrapped due to damage. Operational strength of the bomber units dropped from 75 percent on January 20 to 54 percent on February 25; fighter units dropped from 72 percent of establishment strength to 65 percent. The Fifteenth Air Force lost 90 bombers, 14.6 percent of establishment strength, and the RAF Bomber Command lost 131 bombers, 5.7 percent. Although the numbers were high in absolute terms, the number of bombers involved was much higher than previously; losses represented a much smaller percentage of the attacking force.

Luftwaffe losses were high in the Zerstörer units, which were severely depleted. Single engine fighter losses were 355, with 100 pilots killed. Unlike Second Schweinfurt, the US losses were replaced by the end of February. On March 6, Eighth Air Force bombed Berlin in daylight, losing 69 bombers, more than had been lost on Black Thursday; those losses were made good in a week. The second raid on March 8 saw 35 bombers lost. By the third raid on March 11, the Jadgdwaffe did not rise to attack. The Luftwaffe had lost 160 fighters and over 90 pilots killed in the Berlin campaign. All American losses were made good by the middle of the month. The Luftwaffe’s losses were never made good.

On April 1, 1944, Hackl became acting Geschwaderkommodore of JG 11, after Oberstleutnant Hermann Graf was wounded in combat on March 29. On April 15, Hackl was shot down by P-47s and wounded again. Promoted to Major on May 1, he returned to III/JG 11 on May 5. During the time he flew in the Reichverteidigung, Hackl was known as a tough and ruthless unit commander. In a message to General der Jagdflieger Adolf Galland on May 20, 1944, he recommended that the best utilization of the young and inexperienced new fighter pilots in combat was to attack the bomber formations from the rear, driving the attack to point-blank range, which gave the attacking pilots enough time to focus on a particular target, and threatening the new pilots with court-martial if they did not follow these orders. This became the Sturm tactic, using heavily-armored Fw-190A-8/R2 fighters.

Anton Hackl flew 1,000 combat missions and was officially credited with 172 enemy aircraft plus another 24 unconfirmed aerial victories. Among these numbers are 34 B-17 and B-24 bombers, making him second behind Georg-Peter Eder as the leading daylight bomber claimant. He was shot down eight times and wounded four times. He died in his home town of Regensburg on July 10, 1984.
The kit

This is another limited release of Eduard’s excellent Bf-109G-6/G-14 kit. In the case of this Reichverteidigung release, the 109 kit is paired with the new Fw-190A-8/R2 kit. Cartograf decals for seven 109Gs assigned to Reich Defense units are included.

The Bf-109G series kits are easily the least-fiddly 1/48 kits Eduard has yet released. Modelers who want a super-detailed cockpit may opt for one of the many resin cockpits out there, but for most, what is in the kit will be fine - particularly since it’s all dark grey RLM66 anyway. The Profipack photoetch provides all the instrument panels and the seatbelts.

The fit of the kit overall is very precise and you must take the time to completely clear off any sprue nubs, and keep paint off the mating surfaces since that would be enough to throw things off. After assembling and painting the cockpit, I assembled the fuselage and then assembled the wing, and joined the two sub-assemblies, then added on the horizontal stabilizers. All the control surfaces are separate; the kit is designed to have the flaps lowered and the radiator flaps open. Using care in assembly, you will not need to use any filler anywhere on the kit.

My primary reason for picking Hackl’s JG 11 Bf-109G-6 was because it was an MTT-Regensburg produced airplane, with the distinctive camouflage pattern associated with that factory. I had not included a 109 with this camo pattern in my collection yet.

The kit instructions are very good, with both left and right side illustrations, as well as upper and lower. I painted the white vertical fin and rudder, and prepped white for the Reichverteidigung stripe and lower nose recognition, then painted those yellow, and masked all off. The camouflage pattern was applied freehand in 74/75/76. I then unmasked the model and applied a coat of clear gloss. The Cartograf decals went on without problem under a coat of Solvaset.

Once the decals were set, I washed the model to get rid of any setting solution residue, then applied a coat of thinned Tamiya “Clear Flat.” I then applied exhaust stainingwith Tamiya “Smoke.” The landing gear and aileron mass balances were attached, and the canopy was unmasked and mounted in the open position.

It’s another Eduard 109! The Eduard Profipack kits are superb. You get photoetch detail for instrument panels and seat belts, and an excellent, well-researched decal sheet printed by Cartograf. What’s not to like? Given the myriad camouflage schemes, three from the factories and who knows how many field modifications, along with the many different markings, one could make a career out of doing this series of kits. If you take your time with assembly, you are practically guaranteed a beautiful model as a result. Highly recommended to anyone who’s done a few kits. 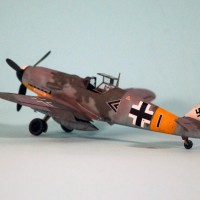 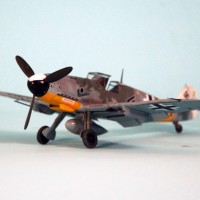 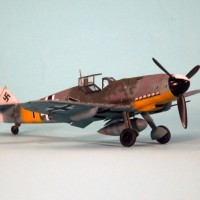 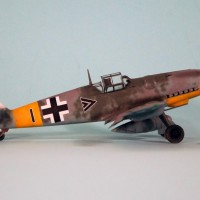 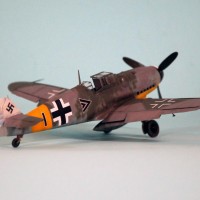 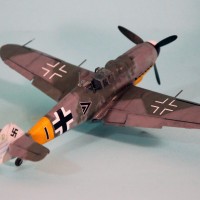 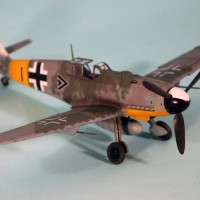 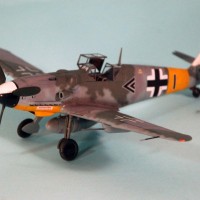 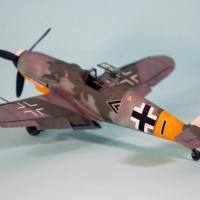 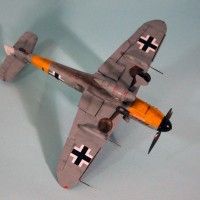 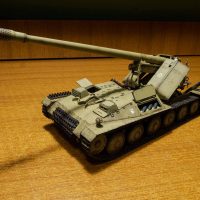 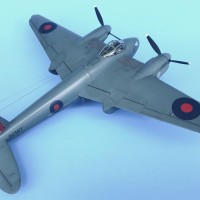 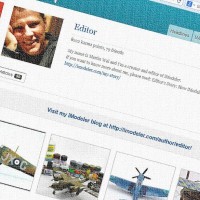 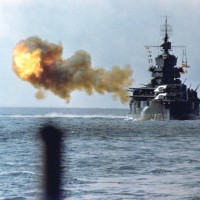