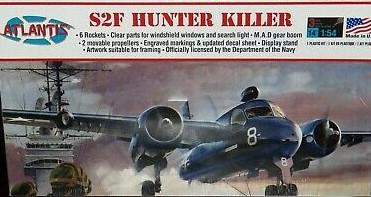 If you have read any of my previous articles you know that I have reached the age where I appreciate a relaxing, casual build. I build a lot of old Revell and Monogram kits that I have been hauling around forever. Along comes Atlantis and their re-releasing of old kits from Revell, Aurora, and a few more. A big plus to several of these kits is that they come with the base and pylon that allows them to be shown in the flight position. The big attraction for me is that the pylons allow me to put more models on a given display shelf. The Atlantis kits I have built in the past have been completed using the TLAR method (That Looks About Right) and were definitely a relaxing build. 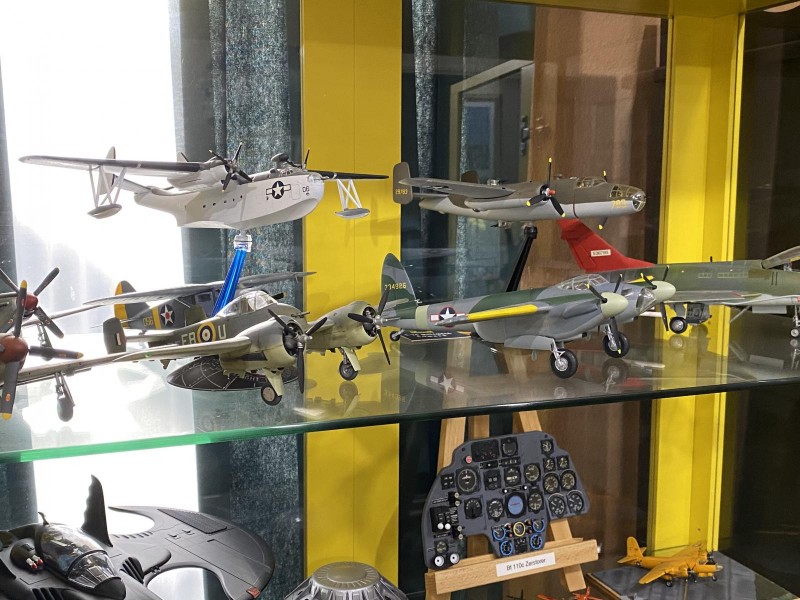 1. Pylons are a space saver

Atlantis just released a 1/54 model of the S2F Tracker. As it turned out, this kit started out as a Comet kit in 1954 before it was eventually released by Aurora. The Aurora logo is cast on the inside of the fuselage. You will notice from the box tops that the markings haven't changed at all since 1954. 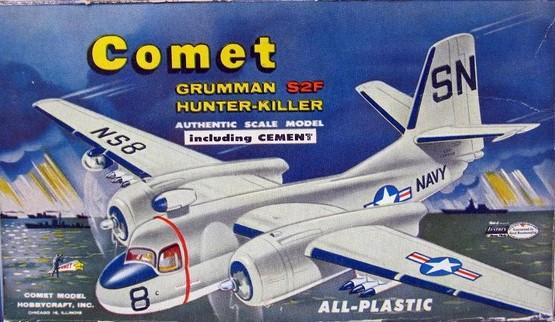 Last weekend I sat at my workbench, ready for a relaxing build of a really cool airplane. The first thing I noticed was that the kit had the location for all of the decals etched in the surface of the plastic. You remember building these kits as a kid and you knew exactly where the decals were supposed to go. At first I thought to build the kit as it was, but nope, couldn't do it. Lots of filling and sanding in my future. The next thing I noticed was that the base and pylon didn't look like the old Revell bits. There was a very interesting attachment for the pylon to the fuselage. If you remember the old Revell kits, there would be a piece that slotted into the bottom of the fuselage that contained the ball that fit into the pylon. The pylon had a socket that would firmly enclose around the ball and you had a great support for your plane. 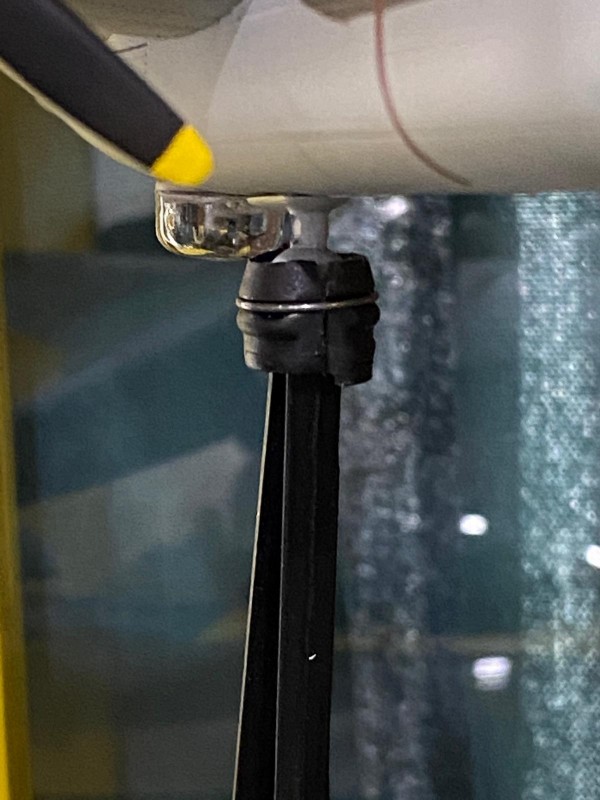 But the pylon for the S2F was obviously added later. So, the pylon has a ball at its top that fits into a socket molded into the bottom of the model. The instructions would have you sandwich the ball between the two fuselage halves during assembly. I couldn't quite come to grips with the idea of having the pylon hanging off the plane during assembly and painting, so I left it off till the end. When the plane was done, I simply enlarged the bottom hole enough to insert the ball snugly. A great idea, except there wasn't enough snugness to keep the plane from falling into a stomach-churning dive to the right. I ended up super gluing the pylon to plane when I was done. 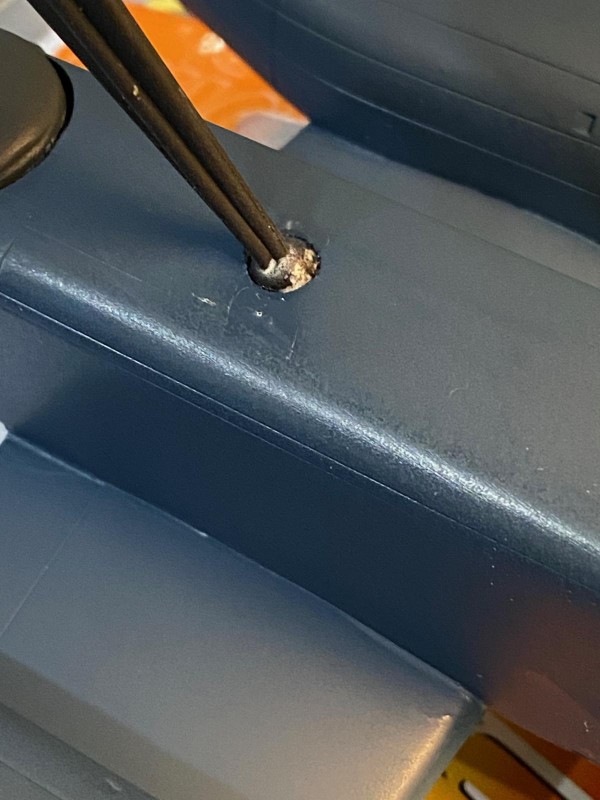 1. Pylon and ball fitted to bottom of fuselage

Well, after a half tube of putty to fill the etched decal locations and a couple of hours of sanding, I ended up with a model that looks pretty good (providing you keep one eye closed and stand a few feet away). And, as predicted, it takes up very little space on my shelf. 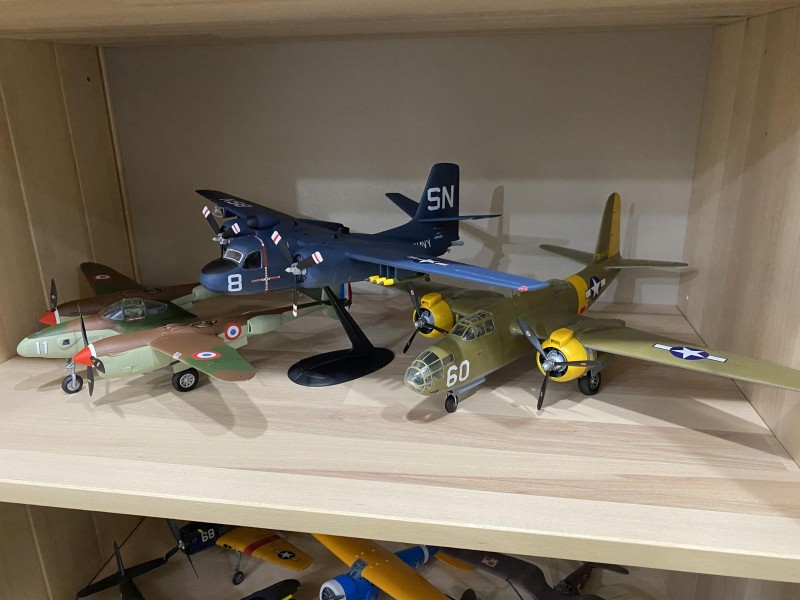 I think I may try something a little more recent for my next model and let my nostalgia genes rest for a while. Cheers and Happy Modeling! 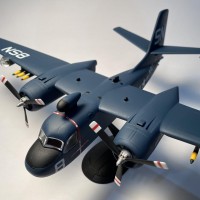 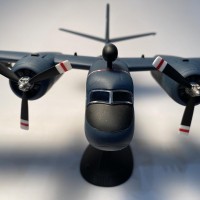 1. Windows inserted from the outside 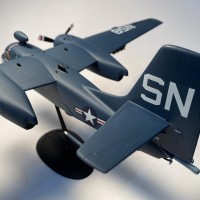 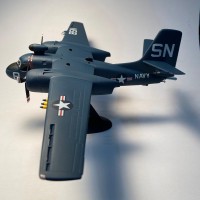 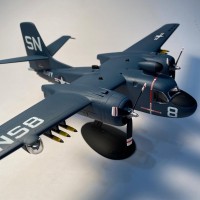 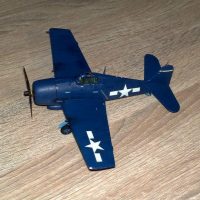 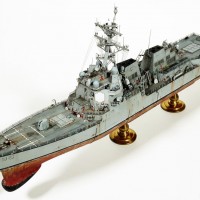 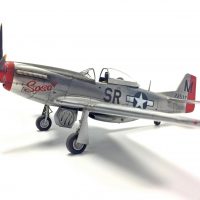 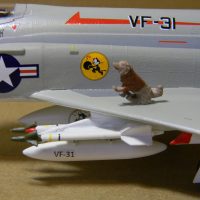