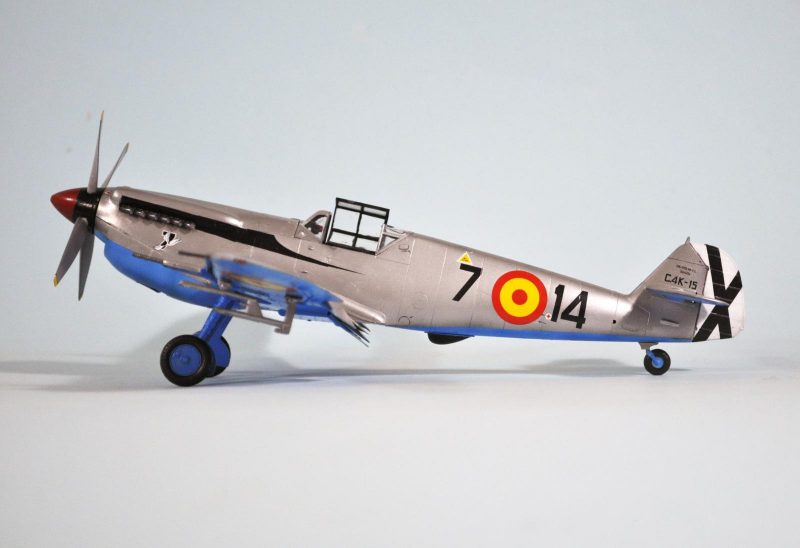 Spain became one of the first foreign users of the Bf-109 when the Condor Legion departed Spain after the civil war leaving behind their Bf-109Es. During the Second World War, the Spanish received a number of Bf-109Fs and in 1942 Hispano of Spain negotiated an agreement with Messerschmitt to license-manufacture 200 Bf-109G-2 fighters. The consequences of this would be lengthy, complicated, and confusing.

Hispano was supposed to receive 25 disassembled Bf-109G-2s to begin production, but deliveries faltered as things went from bad to worse for the Third Reich. By late 1944, Hispano had 25 Bf-109G-2 airframes and no DB-605s. Deciding they would never see the engines, Hispano engineers re-engineered the airframe to use the Hispano-Suiza 12Z 89 engine, providing 1,300 h.p. Performance was not appreciably better than the aging Bf-109Es. The first of the 25 modified Bf-109Gs with the Hispano-Suiza engine was flown July 10, 1947, designated HA-1109-J1L; the remainder of the 25 were completed to a similar standard. Performance was unsatisfactory and the Spanish Air Force (Ejercito del Aire) did not accept them. Hispano tried a second time with the Hispano-Suiza 12Z 17, which was no more powerful than the 12Z 89, but had many improvements, including fuel injection, and was generally regarded as more satisfactory. Production of the HA-1109-K1L began in 1951 and was accepted into service as the "C-4J".

Hispano-Suiza abandoned production of the 12Z engine in late 1952. In 1953 Hispano engineers turned to the British Rolls-Royce Merlin 500-45 engine, with 1,610 h.p. The British had earlier refused to provide Merlins as the result of the arms embargo on Franco Spain, but it was lifted in 1952.

The first Merlin conversion, designated the HA-1109-M1L, flew on December 30, 1954 and demonstrated much improved performance, even with the rocket racks and wing cannons. A large wing fence was added to provide maneuverability even with the rails and cannons in the wing. The Merlin- powered aircraft went into production is the HA-1112-M1L and entered service in 1956 as the C-4K. 171 were delivered, some being upgrades from Hispano-Suiza powered aircraft. The HA-1112-M1L, armed with either a Hispano HS-404 or HS-808 cannon in each wing, had a four-bladed Rotol propeller and a cowling with a "deep-breasted" appearance to accommodate the Merlin, and was known as the "Buchon (Pigeon)". Both of the HA-1110 two- seaters were re-engined with Merlins, and were redesignated HA-1112-M4L.

The HA-1112 M1L saw combat during the 1957-58 “Ifni War” in the Spanish Sahara, the last time any Bf-109 variant fired its guns in anger. However, one final “battle” remained to occur ten years later.

In 1967, the movie “Battle of Britain” was heading into production. The producers hoped to restage the aerial battles with actual aircraft. Twenty-two years after the end of the Second World War, the problem was obtaining the Spitfires, Hurricanes, Bf-109’s and He-111’s that were to feature in the film. Ex-pathfinder bomber pilot Group Captain Hamish Mahaddie, who specialized in buying aircraft for film work was hired to track down the aircraft needed. For the Luftwaffe aircraft, Mahaddie negotiated with the Spanish Air Force who were in the process of finally taking the HA-1112-M1L and CASA 2-111D out of service. Thirty 2-111Ds were loaned to United Artists by the Spanish Air Force in return for a donation by United Artists of £1000 to the Spanish Air Force Widows Fund to masquerade as “He-111" bombers. Mahaddie bought 28 HA-112-M1Ls and hired Spanish pilots experienced on the airplane, though four came from the Confederate Air Force in exchange for four aircraft when filming was complete.

On March 13, 1968, Adolf Galland, who was military advisor on the film for the German side, visited Tablada airfield, where the aerial scenes were in progress. Pedro Santa Cruz, an old friend from the Spanish civil war, was the chief Spanish pilot. Galland was asked how long it had been since he had flown a Bf-109, to which he answered 26 years. Santa Cruz climbed into the back seat of one of the two 2-seaters while Galland climbed in front. He took off and proceeded to give a fabulous aerial demonstration. (General Galland confirmed this legendary tale to me when I met him at the AFAA convention in 1984.)

Today, there are some 12-14 HA-1112-M1Ls still flying, with others still in existence, including the four taken by the CAF that were found in Connie Edwards’ hangar following his death. Two have been modified back to original Bf-109G configuration with DB-605 engines and original cowls, while another has been modified to look like an original Bf-109G even though it is powered now by an Allison engine. The HA-1112 M1L is still the hairiest Bf-109 to fly due to the fact the Merlin’s prop and the vertical fin go the same way, and it wants to “swap ends” on takeoff and when making a power-on approach. Steve Hinton, perhaps the best warbird pilot in the world, nearly killed himself in one when it ground-looped on takeoff while being used in the movie “Pearl Harbor.”

In 1974, while visiting Jack Flaherty’s warbird collection at Monterey airfield here in California, I made the acquaintance of one of these airplanes and found out why there are no six-foot tall Bf-109 pilots: the seat is non-adjustable and the cockpit is designed for a pilot between 5' 3" and 5' 7". When I tried to shoehorn myself into the cockpit, it was impossible to move the stick between my knees with my feet on the rudder pedals, not to mention when I closed the “coffin lid” canopy I couldn’t see out with any ease and my face was six inches from the instrument panel.

Kits of the last 109 have been rare on the ground. Hobbycraft released an injection-molded 1/48 HA-1112 M1L some 20+ years ago that now sells for collector’s prices on eBay. Special Hobby has released a kit of the airplane in 1/72 that is more easily available. Greymatter released a 1/32 conversion set designed by Vincent Kermorgent, using engineering drawings provided by Hispano Aviation, today a part of EADS. This used a solid resin nose, and included resin parts for the modified wing. I reviewed this kit here and at Modeling Madness.

Espen Tjetland, owner of Buchon Scale Models, has released 1/32 conversion sets for both the HA-112 K1L and HA-1112 M1L. The Buchon conversion set was designed by well-known aviation digital artist Ronnie Olsthoorn, who used a process he has developed to create accurate 3D renditions from photos to create a far more accurate conversion kit than the earlier Greymatter set. This conversion features a hollow nose composed of seven parts, including two exhaust stacks with “hollow” ends. This set includes 3-blade props and the modified spinner used on the airplanes for the movie “Battle of Britain,” allowing a modeler to make the movie plane and the modern warbirds. The wing conversion, which works for both the K1L and M1L models, is available separately. This kit includes decals for the same HA-1112 M1L of 71 Esuadron used in the “Ifni War” that was an option in the Greymatter kit, and decals for the Buchon presently in the Museo del Aire in Madrid. There is a separate release for the movie airplane, that includes decals for the “German fighters.”

As with the earlier HA-1112 K1L I did, this is an easy conversion, with the donor kit cut along panel lines. The conversion parts all have excellent fit. If a modeler commits the radical act of following the instructions and doing some test fitting to make certain all is going together right, the result will be a very nice model.

I began by assembling the engine cowling. Everything fits very well, and I only had to apply some Mr. Surfacer 500 to the seam where the radiator intake attaches to the main cowling part.

Perhaps the most difficult part of the whole assembly is attaching the resin forward section of the wing lower center section to the plastic part, since one has to also separately attach the landing gear attachment parts; getting those to fit exactly where they should is crucial to having the gear attach properly.

The conversion set includes a cockpit floor, seat and rear bulkhead, cast as one piece with a separate part for the instrument controls that go where the cannon was in the Bf-109 cockpit. I also used Eduard photoetch rudder pedals and seat belts. After painting and assembling the cockpit, I glued the fuselage together. The engine cowling and the donor kit fuselage came together without difficulty, using C-A glue.

The wing armament is a bit more time-consuming, but not really difficult. Again, the instructions on where to place the photoetch parts are clear; I also opened up the cannon shell ejection ports. The brass rocket rails have resin “feet” and are also easy to position properly following the instructions. The gun barrels would have been better had they too been made of metal; since they are resin and easily broken off if you install them at this stage, I advise not attaching them till all assembly, painting and decaling is completed. I finished off by assembling the four-blade prop.

Before proceeding to painting, I attached the landing gear, keeping the main wheel separate.

Having done the 71 Escuadron blue airplane for the Greymatter conversion, I decided to do the silver/sky blue option. However, after finding a very good color photo of four Buchons in this scheme from 7 Escuadron in 1964, I decided to modify the decals included for the museum airplane to finish the model as one of these airplanes.

I first painted the rudder with Tamiya X-2 Gloss White, then masked it off. After painting the rest of the model overall with Tamiya X-1 Gloss Black, I painted the lower surface with Tamiya X-14 Sky Blue, including the wheel wells and landing gear. I then masked that off and painted the upper surfaces with Vallejo “Semi-Matte Aluminum.” I hadn’t used this color before. It dries looking like polished aluminum; after the decals were applied, I gave the model an overall coat of Clear Satin, which made the paint look exactly like painted aluminum lacquer. The fabric-covered ailerons and elevators were painted with Vallejo “White Aluminum.”

The kit decals are very good and went on without problem under a light coat of Micro-Set.

The front of the spinner was painted with Tamiya X-7 Gloss Red, masked off, and the remainder painted with Tamiya X-1 Gloss Black. I painted the prop tips Tamiya X-4 Gloss Yellow and hand-painted the black border. I then assembled the prop and attached it. I painted the wheels with Tamiya XF-85 “Rubber Black” and attached them. I attached the rocket rails; some of the 7 Escuadron airplanes didn’t carry the rails, and those that did were not photographed carrying the Oerlikon rockets, so I saved those to arm my Greymatter Buchon.

These conversion sets from Buchon Scale Models definitely result in the best, most accurate Buchon model. It is an easy conversion with parts that fit well. For 109Nutz who want to have all the sub-types of their favorite airplane, the set is a “must buy.” Espen has informed me that SBS Resin will be releasing this conversion in 1/48, keyed for the Tamiya Bf-109G-6 kit.

For those interested, there is a detailed account of the building of this model in the "Work In Progress" Group, which includes an account by kit designer Ronnie Olsthoorn about how he used photogrammetry to finally create a completely accurate Buchon model. 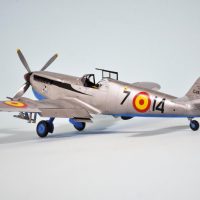 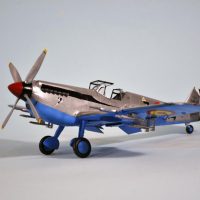 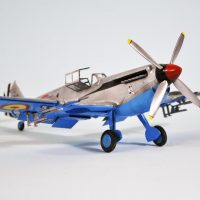 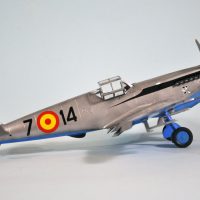 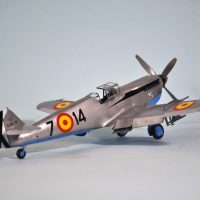 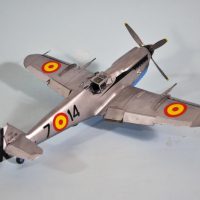 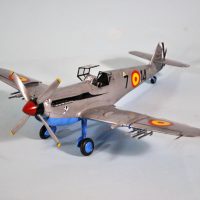 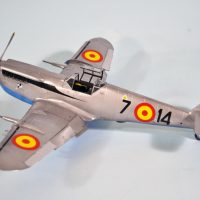 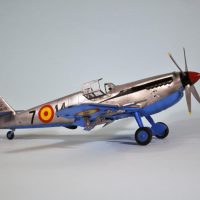 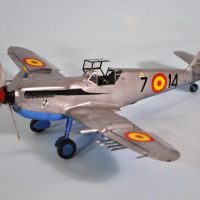 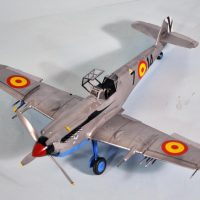 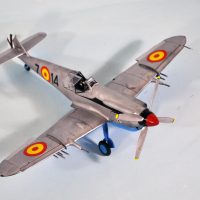 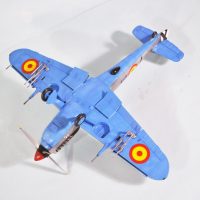 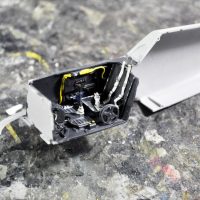 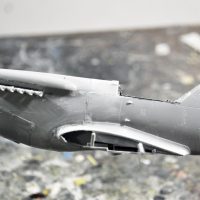 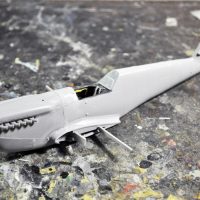 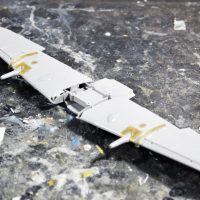 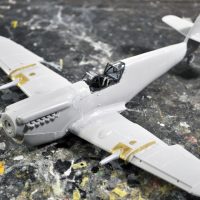 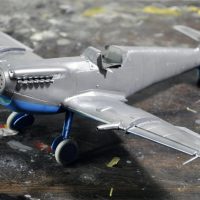 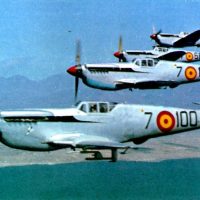 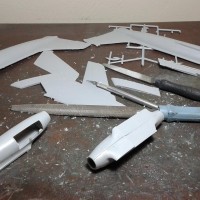 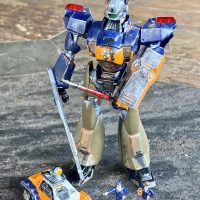