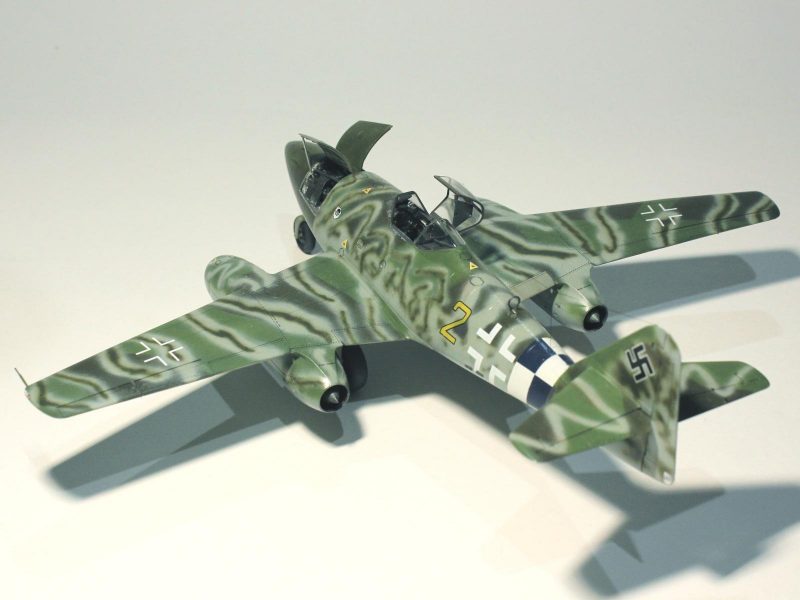 As indicated by the title, this is the third of three Me 262s built simultaneously;

The subject this model represents is a Me 262A-1a aircraft operated but 3./KG(J) 54 as indicated by the yellow aircraft number and blue and white checked fuselage band. It was found abandoned at Ruzyne airfield Prague, Czechoslovakia (now Czech Republic) the end of the war [Brown, D. E., Janda, A., Poruba, T. and Vladar, J., Luftwaffe Over Czech Territory 1945, Vol III: Messerschmitt Me 262s of KG & KG(J) units (Limited edition including decals), JaPo, 2010].
The aircraft is interesting because it combines an unusual and complex camouflage scheme, evidence of earlier aircraft identity code having been painted out and a replacement nose.
This is a typical Tamiya kit - a good level of detail, accurate shape and dimensions and minimal fuss in assembly. Indeed, any problems encountered were because I didn't follow the correct sequence given in the instructions.
So, there is not too much to say about the construction except:
• Decal seat belts are included but I used after-market belts instead.
• Decals are provided for the instrument panel and I cut these out individually or in small groups and applied them.
• I also added yellow painted wires to the rear of the instrument panel as this area is just visible.
• The kit includes white metal nose gear bay and, unlike the Hobby Boss kit, this is enough weight to prevent tail sitting.
• I had a couple of self-induced problems because I didn't follow the correct procedure for assembling the armament bay. Somehow this resulted in a gap in the forward upper nose and a stress crack in the rear of the gun-port panel just forward of the gun bay. I filled these with super glue and sanded them smooth.
• I added elevator and aileron control rods inside the main wheel well.
• The fit of the wing to the fuselage is great with no filler needed along the upper wing roots, but a little filler required underneath. The shape of the forward fuel tank is just a little more curved than the front fuselage, but I more or less left this alone, noting that the fit of these panels was probably a bit rough on the real aircraft.
• All three undercarriage legs had brake lines added using copper wire.
• I added a short section of thin copper wire to the rear canopy and attached aerial wire using Infini Model Fine (0.082mm) Aero Black Rigging line.

I purchased the limited edition of the JaPo book which included a 1/48 scale decal sheet for this and nine other Me 262s. While little is known about the history of this aircraft, the book includes a description of the markings , speculates on the likely manufacturer and W.Nr. and includes a detailed analysis and reconstruction of the camouflage scheme. I have done my best to replicate that on my model.
The first thing I did was to pre-shade the kit.
Next I added the white for the tail band and, when dry, I masked this to give two columns of eight checks (four white and four blue, forward and aft) as seemed to be indicated in the profile in the book. I then sprayed the RLM 24 Blue. However, when I removed the masking, I found that the checks were not properly aligned and that they were too thin vertically.
I started again by respraying the band white. This time, I masked off the forward half of the band and then masked three white checks and sprayed the blue, to give six larger checks around the fuselage. When dry, I removed the masking and used strips of tape to cover the rear blue checks and extend these to cover the forward white checks, thus ensuring a consistent alignment. I then masked off the rear white checks and sprayed the forward blue colour. This resulted in a tail band that better matched the photo of the aircraft.
I then masked off the whole fuselage band in preparation for painting the camouflage pattern.
The nose of this aircraft was a replacement, possibly due to battle damage or a nose-wheel collapse. It was painted in a late production camouflage and is likely to have been produced by a different factory to the rest of the airframe. I painted this a patchy mottle of RLM 81 Brown-Violet and RLM 82 Bright Green over a lower surface of RLM 02 Grey-Green. When dry, I masked it off in preparation for painting the rest of the aircraft.
The inner starboard trailing edge flap was also likely a replacement part due to damage, so I took the opportunity to paint it RLM 02 and then mask it off.
The rest of the airframe has an elaborate camouflage scheme.
The consisted of a standard RLM 81 Brown-Violet and RLM 82 Bright Green over RLM 76 Pale Blue scheme over which was sprayed streaks of a light colour, but darker then the RLM 76, which was then toned down in some easy to reach places with a darker colour. I decided to use a mix of RLM 76 and RLM 02 Grey-Green (about 50:50) for the lighter streaks and then sprayed thin lines of RLM 83 Dark Green down the centre of some of these as guided by the photo and profiles.
A roughly painted dark patch can be seen under the starboard Yellow 2 in the photo of the aircraft. This is large enough to be covering the last two letters of a bomber style four-character aircraft code of the form B3+XX that JG(J) 54 originally used. In fact, other photos exist of abandoned KG(J) 54 aircraft that still had these codes. The first two characters would have been covered by the tail band.
On the port side, it is likely that the first two characters would have been likewise painted over, although they would have been much reduced in size, as was the standard late in the war. The larger rear two letters would not have been completely covered by the tail band, though.
To replicate this, I masked appropriately sized and located rectangles and sprayed then with RLM 66 Black-Grey. I then unmasked and lightly over-spraying them freehand with more RLM 66 to give a soft edged look.
After applying the decals, I gave it a semi-gloss clear coat and attached and painted various small/breakable parts such as the pitot tube and aerials. Oddly, Tamiya does not include the small rod aerial below the rear fuselage even though it has a small depression in the correct location. I used a piece of dressmaker's pin for this.
The tyres were painted over-all Tamiya XF-85 Rubber Black, which was then mixed with white and sprayed around the circumference to give a worn look that I am quite happy with.
Weathering was kept to a minimum. 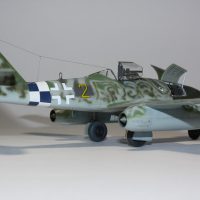 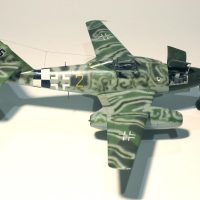 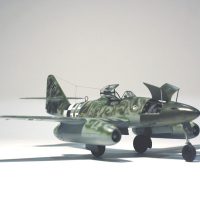 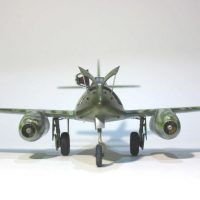 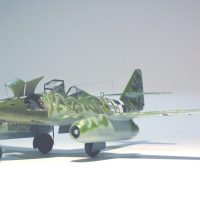 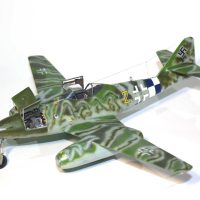 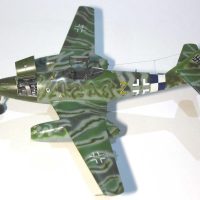 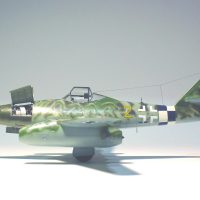 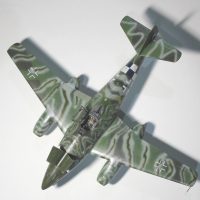 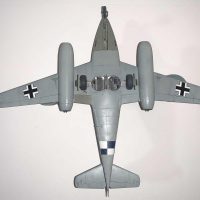 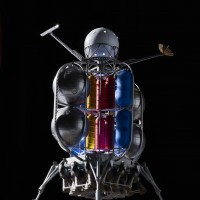 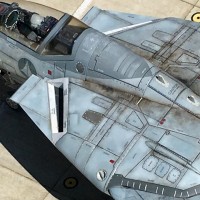 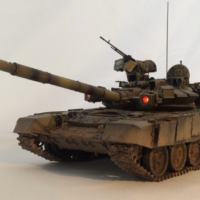 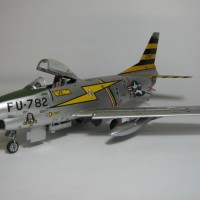