Anybody who ever does armor, no matter what level of intensity, is sooner or later going to confront doing a Tiger (the ugliest tank ever created, IMO). This is mine from the summer of 2006:

Despite the decision to mass produce the PzKpfw III and IV, and the certainty at the time that these two tanks would be adequate for the expected battles of the near future, the German general staff also called for an even heavier tank in 1937. Henschel was instructed to design and build a prototype of a 30-33 ton tank to be the successor to the PzKpfw IV, initially named the Durchbrüchswagen I, or “breakthrough vehicle.” By 1940, Henschel had so improved the design that its designation was changed to DW 2, and it carried a short 75 mm gun. Trials were carried out until 1941, when an order was placed for a new design that was the DW 2. Henschel built two new prototypes in March 1941, and two more that October. These had a superstructure similar to the PzKpfw IV. The suspension had seven interleaved road wheels and three return rollers on each side. Original armament was to be the 75 mm L/48. However, after the Wehrmacht met the Russian T-34/76s, the design was seen as obsolete and development was discontinued, though two were lengthened and armed with a 128mm K/40 gun and were used in Russia in 1942.

Hitler proposed a new specification for a 36 ton tank, armed with a high-velocity gun, heavy armor, and a speed of 25 mph. Henschel developed a prototype by March 1942, when the specifications were changed to a 45 ton tank with 88mm gun, with a deadline for first prototype of Hitler's birthday, April 20, 1942. Prototypes by Henschel and Porsche were shown to Hitler at Rastenburg, where the Henschel design was selected, with production to begin in August 1942.

Designated the Pzkpfw VI, the tank was given the name of Tiger, being the first German tank to be given a name, which recognized it as different from what had gone before.

The armor of the Tiger I was not well sloped, but it was thick. In terms of World War II tank warfare, thickness was a quality in itself, since armor resistance is mainly determined by the ratio between armor thickness and projectile diameter (T/d). The T/d relationship rules that the more the thickness of the armor plate overmatches the diameter of any incoming armor piercing round, the harder it is for the projectile to achieve penetration, while the greater the diameter of the incoming projectile relative to the thickness of the armor plate it hits, the greater the probability of penetration. This is why the side armor of the Tiger I, being 80mm thick, was so difficult to penetrate at combat ranges for most Allied anti-tank and tank guns, whose calibers were overmatched by the thickness of the Tiger I armor.

The quality of the armor was a major asset of the Tiger I, which made it a very special kind of armored fighting vehicle, because it had the best quality of everything, compared to any other German tank. The rolled homogeneous nickel-steel plate, electro-welded interlocking-plate construction armor had a Brinell hardness index of 255-260, making it the best homogeneous armor hardness level for WW II standards. Rigorous quality control procedures ensured it stayed that way. The Tiger I's armor was therefore far superior to that of the Panther, whose armor had a much higher Brinell index, and was consequently very brittle. As a side effect of the usage of this special armor, the Tiger was a very expensive and resource-consuming tank. The cost of a Tiger was RM 250,000. In contrast, a PzKpfw III cost RM 96,200, a PzKpfw IV RM 103,500, and a PzKpfw V Panther RM 117,000. All of this contributed to the fact that fewer Tiger Is were made in the entire Second World War than one month’s production of either the Sherman or the T-34.

A major drawback was the overlapping road wheels, which could freeze together if they were cold enough and clogged with mud. Sometimes the buildup of debris between wheels caused the track to ride up over the sprocket teeth and jam. Tension was such it couldn't be freed by releasing the tension on the idler wheel, or by removing a track pin. While it was possible to tow the disabled Tiger, some crews choose to place an explosive under the track to blow out a link. The other alternative was to abandon the tank. The layout of the rubber tired wheels did give the Tiger a smooth, steady ride. After vehicle 825, all steel wheels were installed beginning in March 1944, which allowed the outside wheels to be removed.

Introduction of the Tiger I gave a dramatic improvement in the power of German armored formations. Because of the real technical advantages of the Tiger I, and the propaganda advantages of creating "elite" units in the Panzertruppen, the Tiger was assigned to special heavy tank battalions (schwere Panzer Abteilungen - sPzAbt). These were held at army or corps level and assigned as needed to reinforce other units during a campaign. Only a few divisions, including the Panzergrenadier Division Großßdeutschland and the Panzer Lehr Division ever received their own Tiger battalions.

Production of the Tiger I was phased out in the fall of 1944. By that August, approximately 1,300 had been produced, which is not many in view of their reputation and their effect on Allied morale. Perhaps this is the best epitaph the Tiger could have for history.

The Tiger I is the most popular single armor modeling subject ever. Period. More different kits of the Tiger have been produced in more scales over the years than any other armor subject. Only the Sherman runs a close second. Kits of the Tiger exist in scales from 1/700 to 1/4 and in every medium from plastic to metal.

Tamiya’s Tiger I in 1/48 is a scale-down of their early 1/35 Tiger I, and suffers many of the same faults as that kit, with some of its own. These include many of the various parts that are usually separate in the larger scale being molded on to the hull for this kit. Of all the Tamiya 1/48 armor kits, this one is most in need of one of the various aftermarket detail sets. In my case, I used the Eduard photoetch set.

While the other tanks in this series allow a modeler to build the upper and lower hulls as separate assemblies that do not come together until everything has been painted and the tracks attached, the layout of the Tiger I pretty much requires full assembly before attaching the tracks. This created the only difficulty I experienced with the kit, since I had to assemble the upper sections of the tracks, and then push them through the narrow space above the road wheels to get them in position.

Beyond this, the kit did not present any difficulty in construction as I followed the instructions. I substituted the Eduard photo-etch mudguards for the kit parts, so that they could be “dinged” and bent, as most photos of Tigers show them to have been, even to knocking them off. I also used the Eduard photoetch screens over the engine covers, since the model doesn’t really look right without them.

I gave the model an overall coat of Tamiya German Armor Yellow, then went back and faded the paint. At this point I applied the decals, then when they were set and dry, I applied a brown wash to “muddy it up.” I then used the Tamiya Weathering Master sets to add more wear and tear and dirt to everything. When I had what looked to me like a tank that had seen action on the Eastern Front in the summer of 1943. I stopped and gave the model a coat of Xtracrylix Gloss to seal everything. I finished that off with several coats of Testor’s Dullcote to get a dead flat finish.

Final Assembly consisted of attaching the tracks, which were difficult as described at the outset. Once these were done, I attached the tow cables and other separate pieces to the hull, then put the turret in position.

The Tiger I is considered the apex of German tank design during the Second World War. It is big, ugly, and dangerous-looking, a perfect metaphor for the regime it served. Building this early product of the Tamiya1/48 armor line, I was able to see how much progress has been made with the later releases. The finished tank looks very good sitting next to the Pzkpfw III and IV and the Panther G in the series. 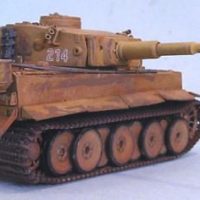 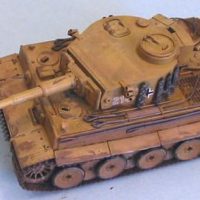 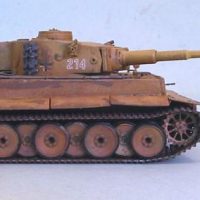 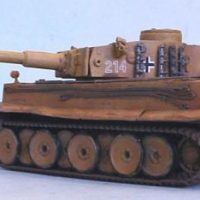 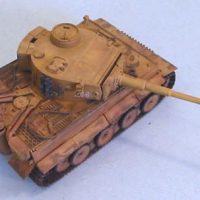 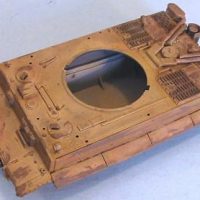 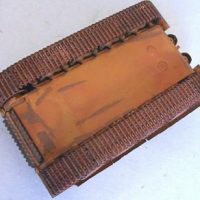 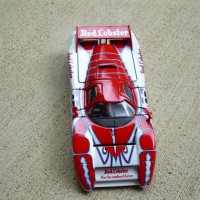 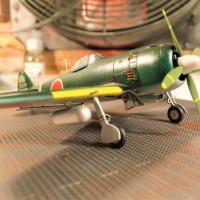 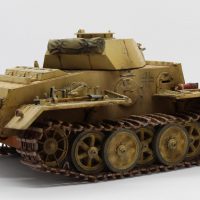