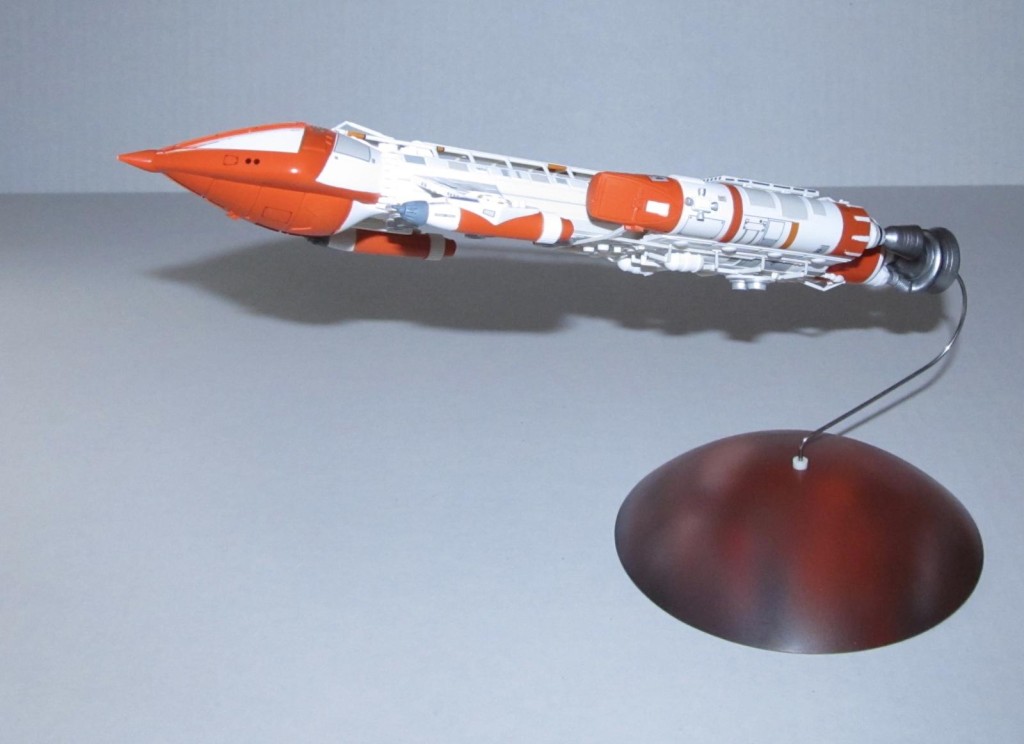 Introduction
Gerry Anderson along with his ex-wife, Sylvia Anderson, made names for themselves with such great kid SF TV shows such as the the Thunderbirds, Captain Scarlett and Fireball XL-7. They were noted for their strong use of puppetry and model laden SFX shots.

In the late 60s, Gerry moved from kids puppet shows to live action SF with the series UFO. However, UFO did not prove to be a success as many TV types thought it was a kids show and were shocked when it dealt with violence, murder, the death of a child and, that old bugaboo, sex. Many stations put UFO on late night rather than ratings friendly prime time so it only lasted a single season.

Undaunted by failure and buoyed by the syndication success of Star Trek, Gerry and Sylvia Anderson attempted to do a sequel of UFO based on the moon. That didn’t work out so Gerry morphed it into what became Space 1999.

Space 1999 was not exactly a shining example of SF TV. It had a lot of elements that could have made it a great show (name actors such as Martin Landau and Barbara Bain-from Mission Impossible, great SFX as many of the SFX guys would later work on stuff like the Star Wars trilogy, no real competition as 1974 TV was a SF wasteland and a lot of buzz within SF fandom), but it’s writing was horrid to say the least. I can say this as one who saw it as a kid when it first came on TV and later bought the DVD box sets as an adult (I have a great weakness for bad British SF.)

The premise of the show was that nuclear waste dumps on the far side of the moon blasted the moon out of orbit and send it hurtling into deep space. Follow that? Famous SF author Issac Asimov reviewed the show and stated that the energy required to blast the moon out of orbit would have turned the Moon into dust and its inhabitants into so much red goo. If real science were applied then the series would have only been one episode long. To keep the show going, the moon violated numerous laws of physics and matter to allow the Alphans to walk at a comfortable one G and travel faster than light. The only way any adult could enjoy this show was to suspend all belief in the laws of the universe as we know it which might explain why my dad rolled his eyes and snorted often when he watched this show with his then five year old son.

The show is considered one of the worst SF TV shows of all time due to the bad plots, unemotional acting and poorly contrived skienze. It was bad, but I’ve seen a lot worse.

Despite it all, the show lasted some 2 years and later became a cult show. Space 1999 proved to be somewhat revolutionary as it was one of the first SF shows that got model makers involved at the beginning of the show’s release.

From Wikipedia
The Mark IX Hawk is a warship featured in the first series episode "War Games". Highly manoeuvrable and well-armed, it was designed specifically to counter extraterrestrial threats against Earth and its colonies. In the episode, a Hawk fleet launched from an alien planet attacks Moonbase Alpha, obliterating the Eagle squadron and inflicting serious damage on the base.

Commissioned in 1997 by the Global Defence Command, the original Hawk fleet is based at Space Dock until the Moon's catastrophic departure (which also destroyed the Space Dock) from Earth orbit on 13 September 1999. Since the most recent UFO incursions had occurred nearly 20 years previously, plans to build a Hawk base on the Moon were abandoned earlier that year.

Like the Eagle Transporter, the Mark IX Hawk is modular, comprising a command module, service module, and engines. It incorporates a two-person cockpit (pilot and gunner) and a life support system mounted on a single fusion engine. Its booster rockets produce a maximum acceleration of 20 g and its forward wings can be fitted with additional weapons as required. In an emergency, the weapons pods and engines can be jettisoned and the command module used as a lifeboat.

The kit
The original Airfix/MPC Hawk was released in 1976 and proved to be quite a popular model despite the fact the ship only appeared in a single episode (“War Games”.) There was a lot to be desired with the model due to accuracy issues. There were a couple of reissues of the original kit, but the last one occurred in 1983 so within a couple of decades it became an expensive sought after kit on auction websites such as e-Bay. A UK company called Warp produced a resin version of the Hawk in the early 2000s but it was quite expensive and not the easiest to build.

Polar Lights recently acquired the license to the Space 1999 franchise and with some help from master modeller Jim Small and consultants like original Space 1999 SFX designer Brian Johnson, they came up with an updated version of the kit under the MPC label that basically puts the old Airfix/MPC kit to the collector kit pasture.

The kit consists of 60 parts in a off white (insignia white?) plastic with fine detail and very little flash. The detail on the parts is excellent for 1/72 scale. It comes with a comprehensive decal sheet with many stencils. Also includes Polar Lights' standard plastic hemisphere base and wire stand to allow the Mk IX Hawk to be posed in flight (as it should as the Hawk has no visible landing gear.)

The assembly instructions are on a tiny booklet, but the paint guide and decal locations are printed on the side of the lower portion of the box so don't throw it away till you are done with the kit!

Construction
The build process required a bit of planning due to the fact that I wanted to do the reel paint scheme which required a lot of orange paint and masking. To avoid any difficulties in painting I had to the assemble only the subassemblies. I cut off the parts of the sprues and cleaned them up without breaking them.

I assembled and glued together the main portion of the boosters and rocket pods, main engine, engine nozzles. I threw the parts into a box and went on a week long and badly needed vacation so I didn't have to worry about phantom seams. When I came back from the trip, I filled the various subassembly seams with CA glue and carefully sanded them down as there was a lot of detail to avoid destroying.

The OMS nozzles were drilled out, but the problem with parts that small is that they break so I had to spend some time on my hands and knees looking for plastic nozzles.

I avoided gluing together the main hull because I had some inserts that needed to be painted first before I could glue it together. Polar Lights does provide decals, but I found the black window decals to be rather fragile so I preferred to paint the windows instead. The coamings were painted Tamiya XF-80 Royal Grey then the window areas were masked and painted flat black.

One thing I found was that the main engine nozzle needed some Vallejo plastic putty filler around the coolant jacket as the part did not fit as well as advertised. Other than the seams, that was all the filler I would use.

Lastly, I cut off a piece of sprue, sanded it to fit the curve of the command model and glued it on. The part was to represent the main laser (or automatic cannon depending on the information source) was located on the Hawk.

Colors and markings
Painting
The original Hawk was supposed to be all white and have a very similar look to the Eagle transporters, but the director of the show wanted the Hawk to standout and be recognizable as the “enemy” so the SFX team took the models back and painted various sections bright orange. The MPC kit gives you the option of both. I selected the bright orange version as it appeared on the show.

First I sprayed all the parts flat white to cover up the yellowish white plastic and cover the various sanded seams. The reel paint scheme required that I mask off a lot of the sub assemblies and spray them Model Master Acrylic international orange.

I painted the top and bottom halves of the main hull with the understanding that I would have to sand the seams down later and repaint. I painted the areas around the cockpit insert to avoid having to mask in that difficult area later on.

The rocket pod nozzles were painted dark grey while the lift motors on the bottom were brush painted silver with Vallejo Metal Color Silver.

At this time I painted the stand to represent the alien planet it came from. I used gloss red, flat white, international orange and Tamiya Hull Red. I feathered the colors in layers. The only color I was missing was dark purple, but it looks the part so I wasn't going to get upset over a missing color.

I first sprayed on a thin coat of Tamiya gloss and let it dry a few hours before adding the decals. For such a small ship, it has a lot of decals to add somewhere between a WW2 fighter and a modern jet fighter. It took a couple of days to add the decals one by one. For the most part I did not have too many issues, but I had a minor mishap which destroyed one of the underside hull decals.

The decals required use of MicroSol, MicroSet and the odd drop of Solvaset for the rather stubborn ones.

No weathering was required as the Mk IX Hawks were clean.

Once dry, the model was wiped down and sprayed with a flat coat to seal all the decals in.

Final construction
The main hull was glued together. I used Tamiya extra thin on the rear and mid section of the hull, but used CA glue for the top/bottom halves of the command module. I sanded the seams away and then had to mask then repaint those areas. Once dry, I glued on the various wings, boosters and pods were glued on.

The various conduit and frames were added and glued in place.

Lastly the plastic mounts (for the wire stand) for the engine and painted plastic based were glued in and the wire stand was inserted into the main engine nozzle and base.

Conclusion
The MPC Mk IX Hawk is quite an impressive kit from Polar Lights. It does require some pre planning and a lot of masking if you do the bright orange scheme from the Space 1999 episode War Games which is why I don't think this kit is for the beginner or casual fan. Some modelling experience is required, but once you get past the painting stage it is quite easy to assemble.

Overall, a fun kit from my past and childhood memories of bad SF TV.

Dedicated to the late Martin Landau (1928-2017) who I had the pleasure of meeting and getting his autograph at a local SF convention several years earlier. A welcoming and friendly guy with the fans. He will be missed. 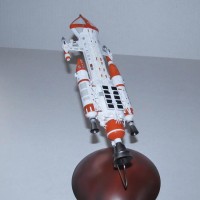 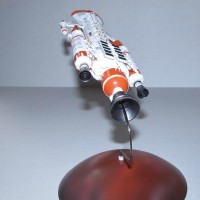 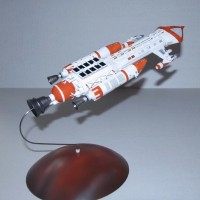 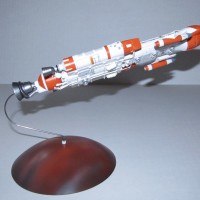 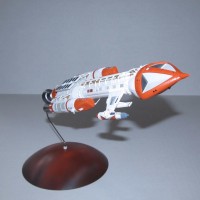 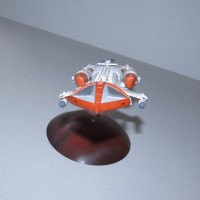 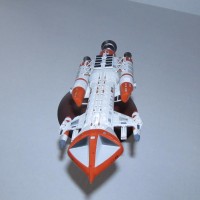 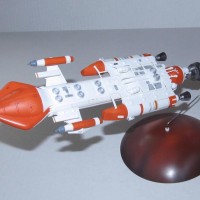 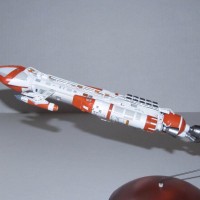 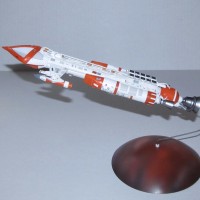 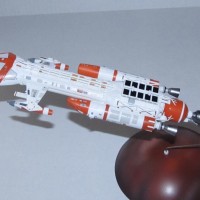 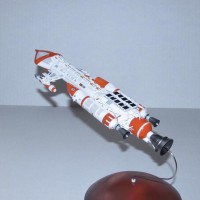 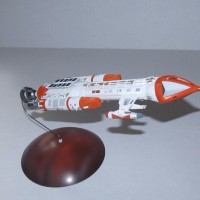 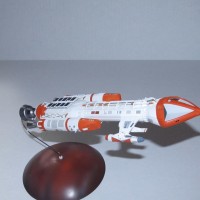 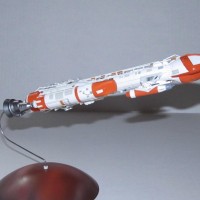 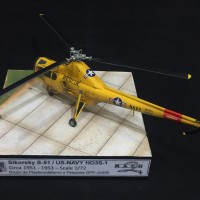 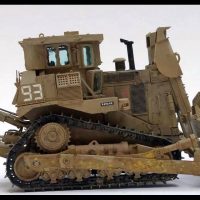 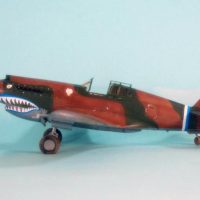