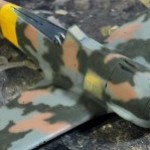 Modelers like the "oddball" paint schemes - the "in the field" repaints (particularly with the Luftwaffe on the Eastern Front) and others. With 95% of wartime photography being Black and White, guessing the colors is, well... a guessing game. And some of the guesses by the "experts" aren't as expert as others, but they get handed down as one expert copies the expert who preceded him, and eventually it fossilizes into "common knowledge." I'm thinking of things like the "all white" Sea Hurricane IIc "Nicki" that was defined as such by a Modeling Hero back in 1973 when he did the model for an Airfix book on Things You Can Do With Our Big Hurricane Kit. This was despite the fact that photos of this airplane and others in the squadron showed the airplanes were painted in the standard FAA scheme, with the white overpainted on the upper surfaces. It took 25 years to clear that one up. And some people still aren't clear on the question.

Yes, this site is for people who do research to present their findings and for others to discuss/debate.

This occurred to me this week after the failure of a paint job on an Fw-190 model. I was going for one of the 3-color JG 54 schemes. The result was such a failure that I took out the Easy Lift Off and took it back down to bare plastic to start over. While thinking about it, I got an update from fellow iModeler Jeff Groves' "Inch High Guy" blog (you should follow it, he has a lot of good stuff there), in which he had done a Fw-190 in a JG 54 scheme, only he had used RLM 02 in place of the "grassy green" color most color profiles show.

The more I looked at it, the more sense it made. I had come to the conclusion one had to start with one overall color, then "blotch" the others onto that. Looking at the pattern in the color profile I was using, the lighter green was the color to use. The thing that always got me was people saying this was some captured Russian paint, since the RLM "grassy green" colors didn't arrive till a year after JG 54 stopped these schemes (they ran out of Russian paint?). But thinking of that color as a "primer," it suddenly made sense looking at Jeff's model. RLM 02 "graugrun" has been a German Army color since the days of Frederick the Great. When Germans would have thought "primer," the color that would have come to mind was RLM 02, which was also used as a camouflage color. I decided to try it. You can see the result in the first post here.

So, this is the place to bring your ideas of what a scheme should be, and more importantly why it should be. All of us are researchers, and this can be very useful for the rest of us.