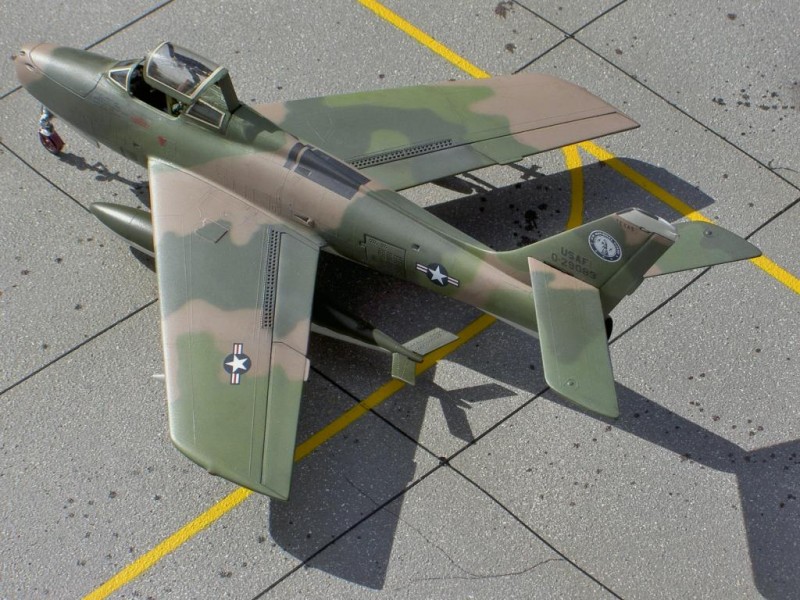 Maybe it's my age, well, I was born in 1952 after all, but I really like the jets from the '50s. To me, they just look like a jet fighter is supposed to. It seems that to aircraft designers back then, there was no limit to their imagination. Some of the most beautiful fighters(the Hawker Hunter comes to mind!) were born then and no computer calculations determined that. For many it seems that if it looked "right" then it was! At any rate, I've really been on a '50s run lately. Buying and working(not finishing so many tho') on a lot of planes from that era.

This build was finished this past June. It's another of the "good" Monogram kits I think. It's possible to make a real nice model out of this old bird. I originally bought this kit back in the late 1980s(!) and it sat in the stash for years. When I did finally get around to building it, I tried an experiment of sorts. I primed the bottom side in a dark gray, and then sprayed the light gray over that. Then, I gently sanded away the lighter color over the raised panel lines. It turned out pretty much as I wanted, but the pics I've taken show it to be much dirtier that I'd like. Oh well, that's how it goes with builders of "four-footers" such as myself. I really like the looks of the Thunderstreak and yes, I do know about it's shortcomings as a service aircraft. Still, it's a sleek, swept-wing beauty to me and I love how it looks parked with it's 1950's peers.

The kit dates back to 1984 and its detail must've been somewhat state of the art back then. I have seen examples on the web that are really outstanding. I finished mine in the three color camo seen on these birds near the end of their use. This one represents an aircraft of the Texas Air Guard. I used Humbrol 116 enamel for the darker green, Humbrol 117 for the lighter green, Model Master Tan for the third color. The underside was done in Model Master camo gray. All of the upper colors were lightened with Humbrol satin white to get a faded look. The decals are a combination of aftermarket and kit choices. The seat harnesses are from an Eduard set for an F-104 if I recall correctly. I figured close enough for government work! The characteristic insulation around the canopy framing is EZ Mask vinyl stripes and I used EZ Masks to paint the canopy too. The canopy support arms gave no end of trouble and I redid them several times, finally achieving the most tenuous attachment to the canopy. The arms should be more vertical but damn, I was just tired of fooling with it and left it as is. We'll just say the hydraulics are leaking a bit, lol.

The model has many flaws, as do most of mine I guess. But, it is finished and I love seeing it in my "gallery" of 1950's planes. As usual, I photographed her at the little Cameron airport. So, with some trepidation, I'll show my Republic F-84F Thunderstreak. Thanks for taking a look at her!
Gary