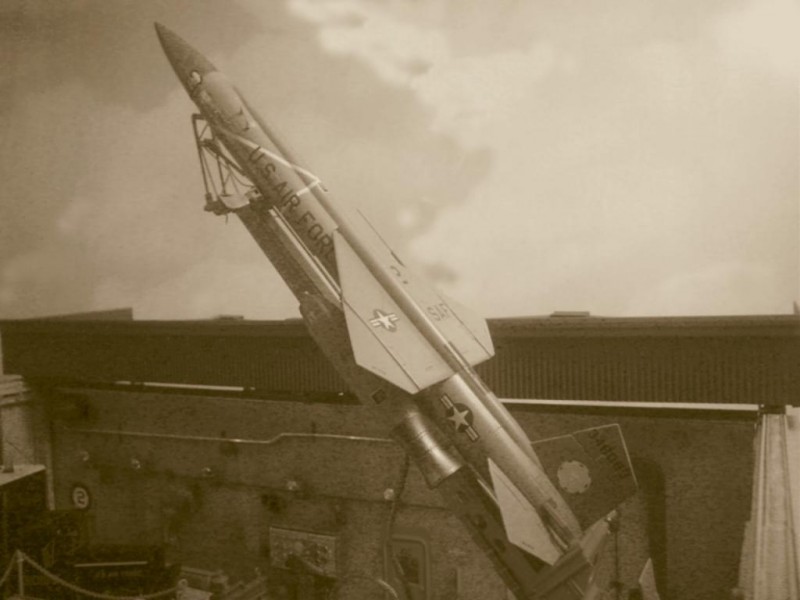 The CIM-10 BOMARC missile was the US Air Force entry in America's air defence, an unmanned adjunct with its air defense fighter interceptors. The missile featured a liquid-fuel booster with two ram jet sustainers, longer range than the Army's Nike Hercules, and could be fired remotely by NORAD's direction center. BOMARC was guided to an intercept point by ground command, at which point the missile's terminal homing radar locked onto the target for final interception. Maximum range for the missile was 400 nm; maximum speed was Mach 3.95. The BOMARC carried either a high explosive expanding rod or nuclear warhead. Air Force planning called for forty missile sites ringing the country: after the 1957 spending cuts, deployment was reduced to ten sites located at existing Air Force bases. The Army's Nike missile program was far more entensive and the "winner" in the two Services' rivalry for SAM defense of the United States.

Revell's BOMARC model was part of the big release of the company's 24 missile and rocket models in 1958-1960. The 1:47 scale model contained the missile, launcher and three figures. By 1960 almost all the missile/rocket kits were withdrawn from the catalog. Despite the "space race" fever of the time, these kits were failures in term's of sales. The problem was that the human element (pilot) was not present, so most kids of the time didn't see the "play value" in a aircraft that took off and blew up on landing. Still, these un popular kits are highly prized today by us "over-the-hill" wannabe rocket men. As one can see in picture 11, there's not much to the model, another flaw in most of these kits. I figured I'd improve upon the model's shortcomings by building a launch shelter. I was stationed at a former USAF base that had a BOMARC battery site. On my lunch hour I'd visit the abandoned site and took both photos and measurements. The missile shelters were simple affairs, metal doors on both ends of a concrete box with a sliding metal roof. For the model I left off one side of the concrete wall and one half of the roof to facilitate viewing. I kitbashed the Revell Kenworth tractor/trailer kit into a testing truck complete with a scratch built interior and diesel generator located on the rear of the truck. The figures came out of the scrap box as well as many of the other parts. The mobile yellow work platform was scratch built of brass, the entire base is pink insulation foam skim coated with joint compound and painted with thinned out ink.The jeep was a modified plastic kit and I placed the 1958 Edsel to give the scene a "period" look. 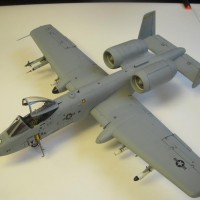 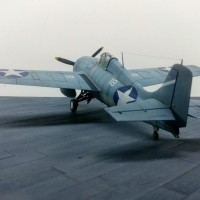 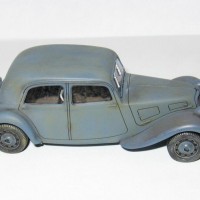 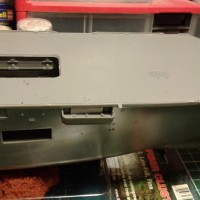