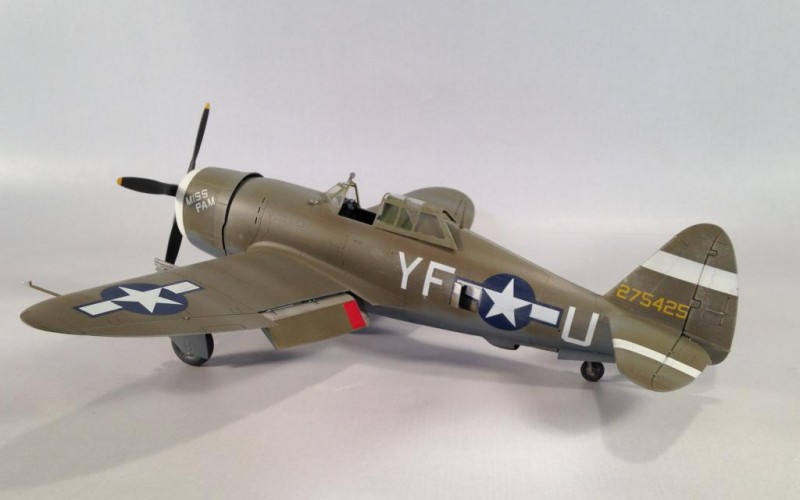 This model depicts the P-47 that was being flown by F/O Wambier when he was shot down by an FW-190 of JG-26. On December 30,1943.
He was returning to his home base after a bomber escort mission. Also downed on this flight was another P-47 of the same squadron piloted by Captain Carl Ekstrom. (See my earlier posted article on Ekstrom’s P-47)
I received a comment on my posted Ekstrom article from Steve, who stated that his relative was flying in the same flight being led by Captain Ekstrom. I made contact with Steve and found that F/O Wambier was his uncle. Steve has done a considerable amount of research on his uncle’s military service and in particular the circumstances of this mission. He obtained Missing Air Crew Reports on his uncle and also on Captain Ekstrom plus he has researched any available German records. He has allowed me to share some of the points of his research.

On the above date a flight of four P-47’s of the 358th FS were returning home after a mission to escort bombers. They were in the vicinity of Reims, France when they were attacked by two FW-190’s. According to the MACR, Lt John Markin and F/O Wambier dove to confront the FW’s head on. Lt Markinn stated “The attack was made head on and before I started firing I looked at F/O Wambier who was about 300 yards behind me. I fired head on in a slight dive and pulled up in a steep right turn and F/O Wambier was not with me.” Markin said he received no response to his radio calls. He lost contact with the other two P-47’s so he joined up with another flight and flew home. Nothing further was heard of F/O Wambier.

Captains, Ekstrom and Roscoe Fussell also dove on the FW’s and broke off their attack at about 7000 feet then continued on toward their home base. As they were nearing the coast of France they encountered ground fire. They dove on the flack batteries and hedgehopped to try to avoid receiving fire. Captain Fussell lost contact with Captain Eckstrom and being low on fuel he continued on to land at the nearest base he could find in England.
Through his extensive and determined research, Steve is almost 100 % sure that F/O Wambier was shot down by then, Feldwebel, Willhelm Mayer of JG26 flying an FW-190. On January 4, 1945, Wilhelm Mayer was shot down and killed by RAF Spitfires near Emsland, Germany. He was posthumously awarded the Knight's Cross, of the Iron Cross on March 12, 1945. During his career he was credited with 27 aerial victories, all on the Western Front.

It is instances such as this that adds so much to the mere making of a model. Through my initial posting of Captain Ekstrom’s P-47, Steve got in contact with Captain Ekstroms daughter Vicki and shared information on this event. They have become friends in their shared loss.

Making both of these models and giving them to Steve and Vicki is my privilege and honor to respect and pay homage to F/O Charles Wambier and Captain Carl Ekstrom.

This P-47 model is the 1/48 Tamiya kit and was build straight out of the box.

The P-47D model.
F/O Wambier in the cockpit of a P-47.
Two photos of F/O Wambier taken when he was an aviation cadet.
Feldwebel Willhelm Mayer 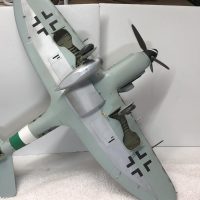 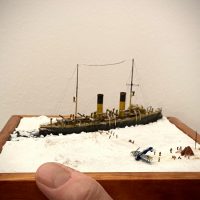 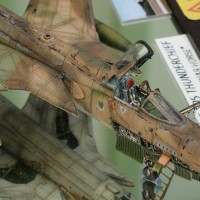