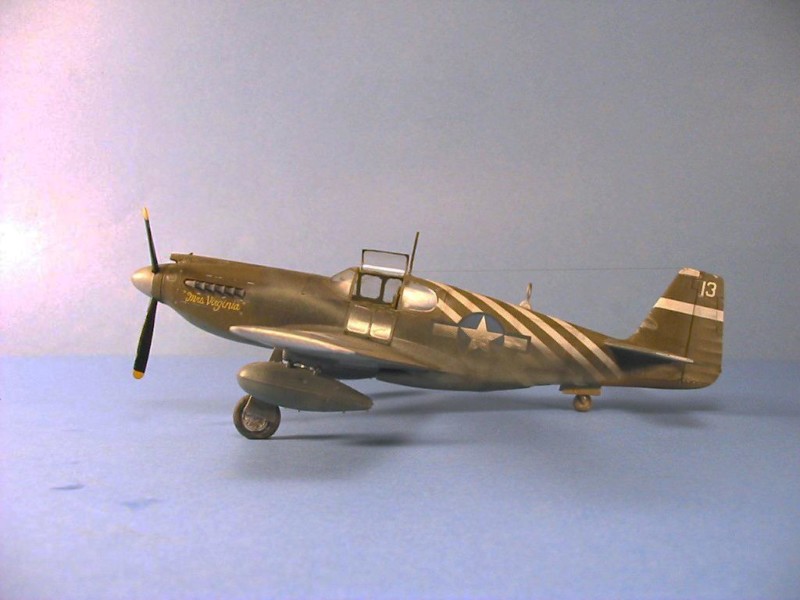 Due to a few air-to-air photos, “Mrs. Virginia” a P-51A of the 1st Air Commando Unit is well-known. The big thing with doing a model is to get the built-up exhaust staining. This is the result of leaning the engine to provide range. If you examine the photos carefully, you also have to apply Tamiya “smoke” so that it drips when the airplane was on the ground. I was really worried about getting it right because the staining went over other markings, so it was a “get it right the first time” project. The kit is an Accurate Miniatures kit with the Squadron/True Details resin cockpit and decals from a company I cannot remember.

Everyone “knows” that the Mustang was the airplane designed and built in 120 days for the British because North American’s Dutch Kindelberger didn’t want to build Curtiss P-40s under license. Also that the first Mustangs were a disappointment because they were hobbled by the god-awful Allison engine, and that the airplane only became “good” when it was powered by the mighty Merlin. Right? That’s the stuff in all the Mustang books, isn’t it?

Well, yes, all that is in the “history books,” most of which are written by people who prove the old saw that if you copy from one it’s plagiarism, while if you copy from many it’s research. Also, if the many have copied from each other, mistakes can indeed become “facts.” We are only now, seventy years after the events, starting to discover that a lot of what was written as history at the outset in the 1950s and 1960s was “uninformed” to be generous. It was then was copied by those who followed, to the point that it became “the truth” because it had been repeated so many times.

Here’s a truth from the horse’s mouth about the origins of the Mustang: in 1981, Edgar Schmued, designer of the Mustang, came out to Chino for a 40th Anniversary celebration of his most famous work at The Air Museum, “Planes of Fame.” Mr. Schmued had trained as an aircraft designer in Germany and then worked in the field in South America before coming to the US when he was hired by a company that later became part of North American. He was among the first US aviation experts to examine the first Bf-109 to arrive in the US after being shot down in the Spanish Civil War, and applied what he learned there to a design he had been working on that he thought was what a good fighter should be. As he said that day,”Yes, the Mustang was built in 120 days, but I had been designing it for five years.”

Furthermore, Dutch Kindelberger knew about Schmued’s filing cabinet full of drawings, and had a strong hunch it was a pretty good design, at the time he turned down the British offer to fund North American’s license production of the P-40, which was an airplane Kindelberger correctly saw as being at the end of its development cycle. It might be a fight to turn the drawings into blueprints inside 120 days, but they were not starting with “clean paper” as everyone has believed all these years since.

So far as the Allison-powered Mustang being a “disappointment” is concerned, the late Southern California aviation legend the Rev. B.C. Reid – who flew every kind of Mustang there was with the 107th Tac Recon Squadron of the 67th Tac Recon Group during 1943-45 – told me that the P-51A Mustang was to the Mustang series what the Bf-109F was to Messerschmitt’s fighter: the best combination of engine and airframe for flight harmony. “After the A-model, they kept adding weight more than they added power,” he once told me, “and the D-model was an underpowered truck in comparison with the A-model. Its only grace was it could fly high.” The 107th TRS kept F-6As (the photo-recon P-51A) to the end of the war, and pilots like Reid chose to fly them over the F6C (P-51C) or F6D (P-51D) whenever possible, “because you could outperform anything under ten thousand feet in that baby.”

The first Mustang Ace wasn’t even flying a Mustang! 1LT Michael T. Russo of the 522nd FBS shot down five German aircraft between September 13 and December 30, 1943, while flying something its pilots called an “Invader.” The A-36A never had an “official name,” though Lt. Robert B. Walsh of the 27th Fighter-Bomber Group is generally credited with suggesting “Why don’t we call them ‘Invaders’ since we’re always invading places?” For an airplane that wasn’t even a fighter, the A-36s of the 27th FBG managed to shoot down 53 German and Italian aircraft between their introduction to combat in June 1943 and the group’s transfer to P-47s in April 1944.

The first long-range escort missions by Mustangs weren’t flown out of England into Germany, they were flown from India across the Indian Ocean to Burma, a further distance than East Anglia to Berlin, and the airplanes involved were P-51As and A-36s of the 311th Fighter Group. By the end of their fights over Rangoon in November 1943 – a full month before the 354th FG flew the first Mustang escort in the ETO – CAPT J.J. England of the 311th’s 530th FS had 8 victories.

All of this is to say that there was “plenty of fight” in the first Mustangs. This takes away nothing from the outstanding achievements of the P-51B and P-51D, which literally won the war in the air over Europe and broke the back of the Luftwaffe. This in turn, enabled the Normandy Invasion and the liberation of Western Europe to take place; no small achievement.

In August 1943 Lord Louis Mountbatten, Supreme Allied Commander of SEAC, met with General Arnold to discuss plans for American support for these British Chindit expeditions into Burma. The new unit changed it name five times as it evolved, from Project 9 to Project CA 281, then to 5318th Provisional Unit (Air), then to Number Air Commando Force and finally 1st Air Commando Group. The phrase ‘Air Commando’ was allegedly coined by General Arnold to honor Lord Mountbatten who earlier had commanded British Commandos.

Now to find men with the capability to command this new force. This selection was finally narrowed down to two individuals and being unable to choose between the two it was decided to make them joint leaders. The first was Lt. Col. Philip G. Cochran, who was a very confident, aggressive and imaginative officer who had an excellent war record as a fighter pilot in North Africa. The second was Lt. Col. John R Ailson, an ‘Ace’ who had flown with Major General Claire L. Chennault’s 23rd Fighter Group. After the selection and interview with both men by General Arnold, it is said the General Arnold ended the session with these words, ‘To hell with paperwork, go out an fight’.

The two new commanders were given complete freedom to gather men and materials. Thirteen (13) C-47’s were acquired along with one hundred (100) CG-4A Waco Gliders for transport operations. Twenty-five (25) TG-5 training gliders were acquired for glider transport use into remote areas. A dozen (12) Noorduyn C-64 Norseman airplanes were acquired, these to serve in a capacity between that of the C-47 and the gliders and the planned light aircraft which would be used to evacuate the sick and wounded. For light aircraft, one hundred (100) Vultee L-1 aircraft were chosen due to their ability to carry 2-3 stretchers. It soon became apparent that this number of L-1’s was not available, so the balance of the light aircraft became the Stinson L-5 Sentinel. The L-5, although faster then the L-1 could only carry one stretcher and required a longer take-off area. Last but not least, Lt. Col. Alison convinced the brass at Wright Field to send a Technical Representative to India to put to the test, the new Sikorsky helicopter, the YR-4, under actual combat conditions. The fighter requirement was covered when thirty (30) North American P-51A Mustangs were acquired.

Project 9 was finally organized at Seymour-Johnson Field in North Carolina in October 1943 and then redesignated 5318th Provisional Unit (Air) before reporting for duty in India. The Units objective had been carefully defined by General Arnold to: 1: ‘To facilitate the forward movement of Wingate’s columns’; 2: ‘To facilitate the supply and evacuation of these columns’; 3: ‘To provide a small air covering and striking force’ and 4: ‘To acquire air experience under the conditions expected to be encountered’. Within six months the 5318th Provisional Unit (Air) was in India, ready to begin operations.

In early 1944 Wingate and his 3rd Indian Division, also known, as ‘Special Force‘ was ready for action. Together with Cochran and Alison he began the planning of behind the lines operations of his forces. Plans called for the gliders to fly Chindits and engineers into small jungle clearings, here the engineers would carve out landing strips for C-47’s and the balance of Wingates brigades.

On February 15, 1944, an unfortunate night training accident occurred while a C-47 was towing two gliders. Which resulted in the death of four British and three American troops. The next day, Wingate’s unit commander sent a note to the flyers, simply stating: ‘Please be assured that we will go with your boys Any Place, Any Time, Any Where’. This phrase was adopted as the motto of the 5318th Provisional Unit (Air) and has been used in the Air Commando and Special Operations community since.

The 5318th Provisional Unit (Air) at this point was still missing the medium bombers also needed for close air support operations. These had been planned for and requested from Royal Air Force. The RAF being unable to fulfill this commitment forced Lt. Col. Cochran obtained twelve (12) North American B-25H Mitchell bombers which were initially destined for the 14th Air Force. These bombers with their four-.50 cal. machine guns and a single 75-mm cannon mounted in the nose were to prove priceless in the close air support role.

Phil Cochran and the 1st Air Commando Group became the inspiration for Milton Caniff’s popular comic strip (that I grew up reading), “Terry And The Pirates.” 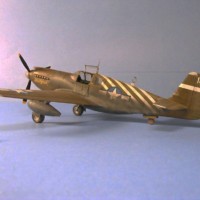 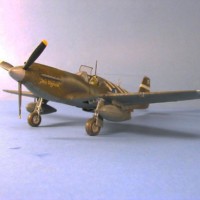 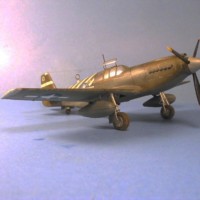 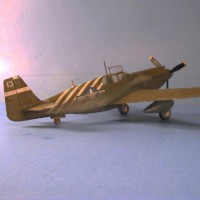 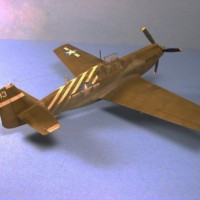 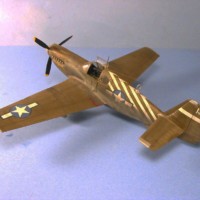 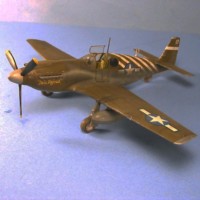 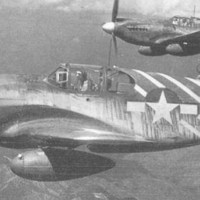 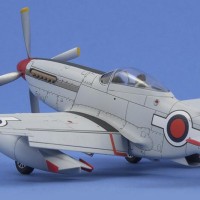 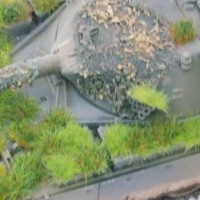 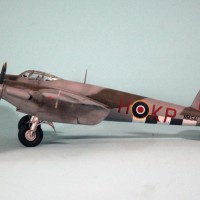