The Bell AH-1 Cobra came on the scene in 1967. It was the first dedicated gunship platform from the ground up in the world. I remember how impressed I was the first time I saw one with that signature front profile of three foot across from shoulder to shoulder making it a very small target from that angle. Even still about 1/3 of all sent to Vietnam where shot down, yet "Charlie" didn't like messing with Air Cav units for obvious reasons as most who did didn't make it to the retirement party. The very first ones didn't have AC but Bell quickly got an AC system that spit ice which the pilots loved. It was armed to the teeth with miniguns and vulcan cannon but the real cherry on top was the rockets which could strike from three klicks away from the target ( a klick a kilometer is about 62% of a mile) and was spot on from one klick. They could carry 50 to 70 rockets with ten lb. warheads - a Cobra and wingman could throw a lot of hate at the enemy... The chin turret fired NATO 7.62mm bullets from one minigun (M134) , alongside a 40mm grenade launcher. Both were fed from an ammo bay right behind the turret, with slide-out drums. The minigun held 4000 rounds and the "chunker" held just over 300 - about one solid minute of firing in short concentrated bursts. On night missions the pilots had to close their eyes when they fired to preserve what little night vision they had. They shot at a lot of campfires at night, and by day cleared roads and rivers, supported armor columns, provided an eye in the sky and flew top cover for the "slicks". This was the first weapon to experiment with look down shoot down capability, meaning when the pilot looked through the loupe on his helmet the gun moved to whatever he was looking at and was deadly accurate if within range. The problem with the mini gun is you can only lock a target for a second or two as it fired so fast there isn't much time to zero in because you're expending about 67 bullets a second but in skilled hands it tore up anything the gunner looked at as it could hover almost motionless and pour it on. In fact a major complaint was it threw so much lead at the target after a second or two there was too much junk in the air and the target was obscured. I remember reading about one attacking a rather large hacienda headquarters about 10,000 square ft with a tile roof and in seconds there wasn't a tile left on the roof. The pilot said it "tossed tiles all over the place". When you see a guy in hollywood shooting one from the hip it's total fabrication. In addition to the gun weight you'd have 100 lbs of batteries (two car batteries), and ammo is quite heavy also making it a physical impossibility. The electric Gatling gun dates back to 1900 but there were no vehicles to put it on but ships (with turbine power) and they hadn't invented the belt feed yet so it was dropped until after WWII. In 1969 the USMC was introduced to the "Snake", it became a marriage forged in hell that remains to this day. The Marines immediately fell in love with this platform as they quickly realized far less Marines were dying and the enemy body count was doubling and tripling. The Army switched to the Apache in the mid 80's and retired the last Cobra in 1999 but the Marines just kept improving on the airframe like the Israelis and never bought the Apache. You can buy two Cobras for one Apache... that's how the Marines roll...gunships are called attack helicopters or gunslingers and troop transports are assault choppers or "Slicks" so named because they had a lot less hanging off the outside...in the snakes early years you either had to have a full tank of gas or a full weapons load but the engines were quickly beefed up to accommodate both..., today the "Gyrenes" have two...the rear seater flies the chopper and the front seater navigates, observes and fires the weapons systems but both can carry out any job if the other is incapacitated...today you have to ask permission to shoot... but it was use your own judgement in the "nam"... they shot and the only question asked was what's cold bartender after hours.., or how many you get today from your shoulder to shoulder fellow airmen, as they kept score and stacked up beer bottles while throwing darts...you might say the Cobra has been putting fear in the hearts of her enemies for over fifty years...a deadly mother cobra protecting her brood... an aptly named and simply magnificent, iconic aircraft for all time 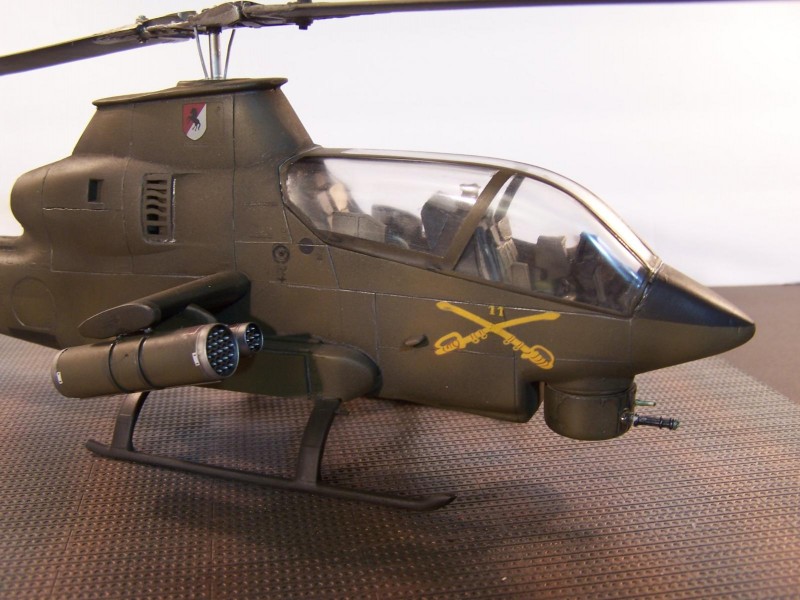 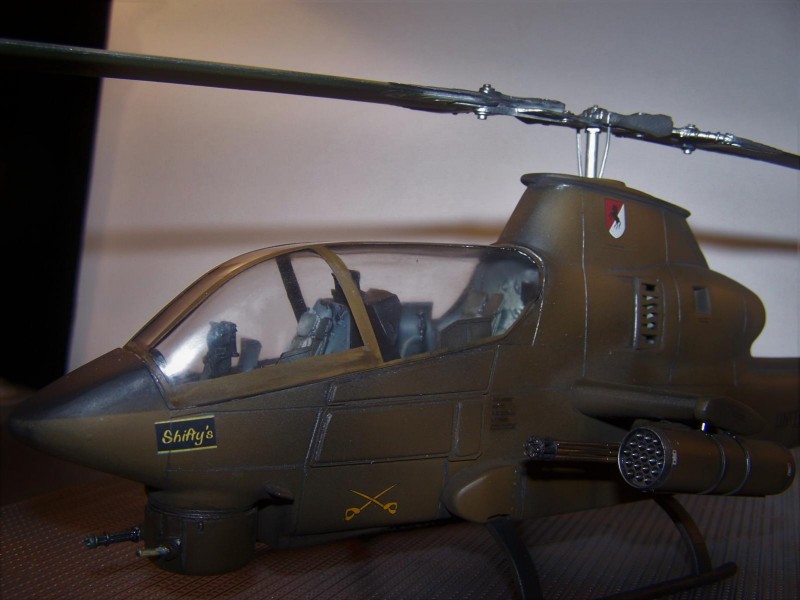 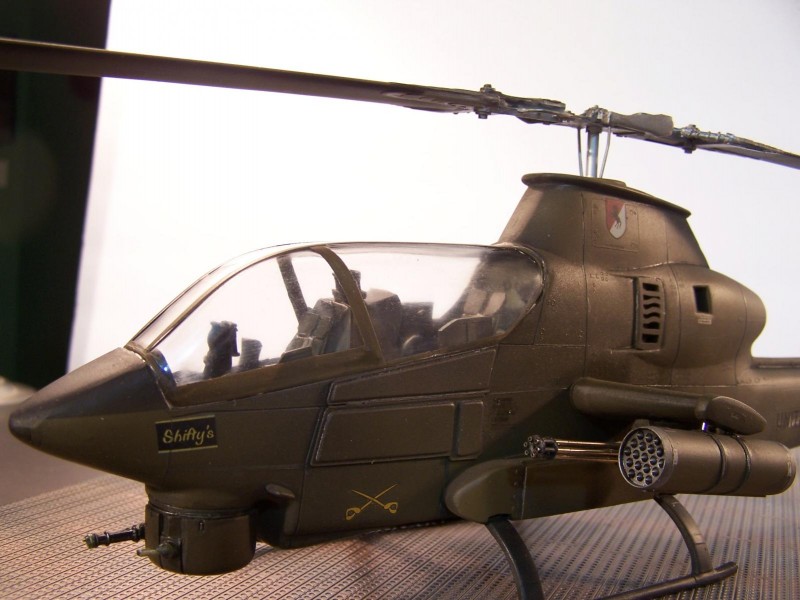 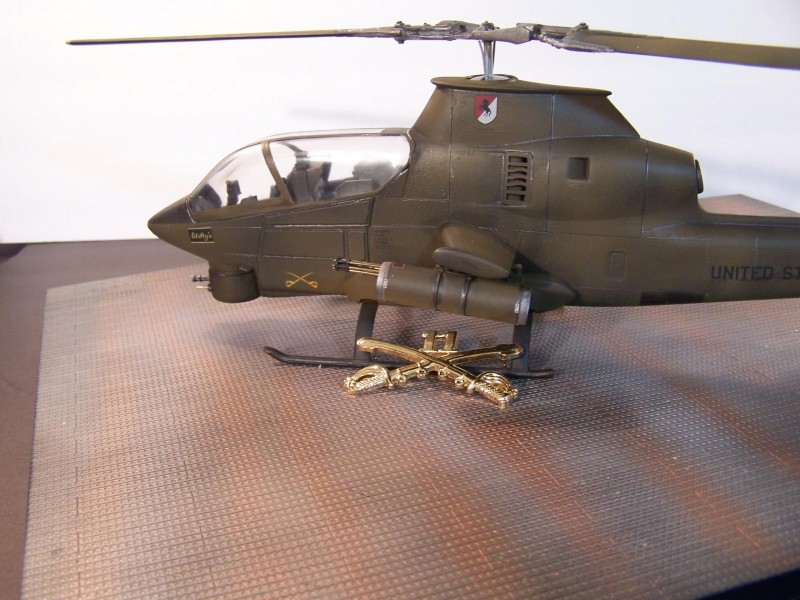 quite impressive in his own right 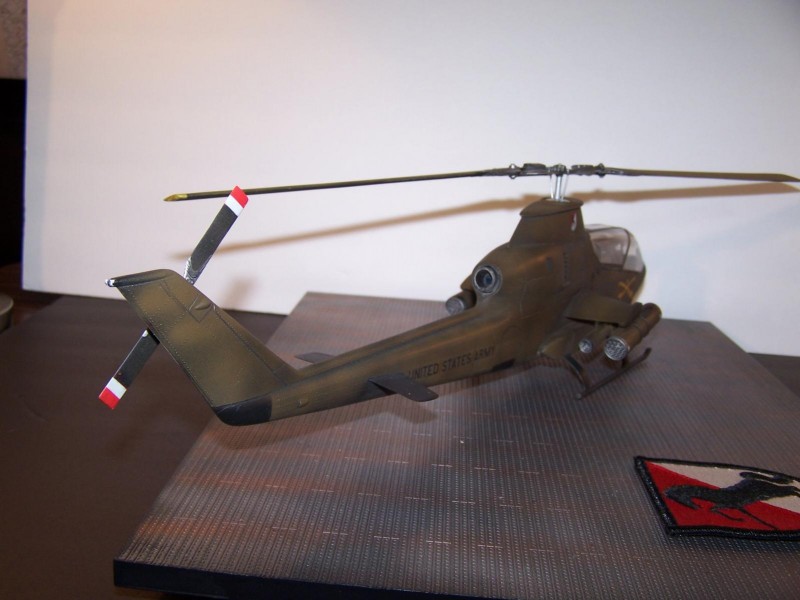 he commanded the battle from a chopper and was shot down three times from his mobile command post,in his three tours in "Nam" 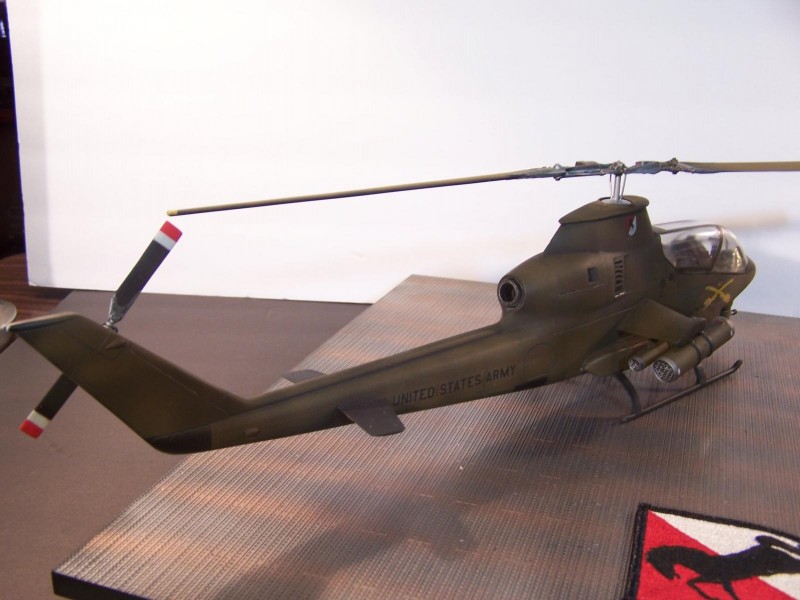 they had their own air assault and gunslingers 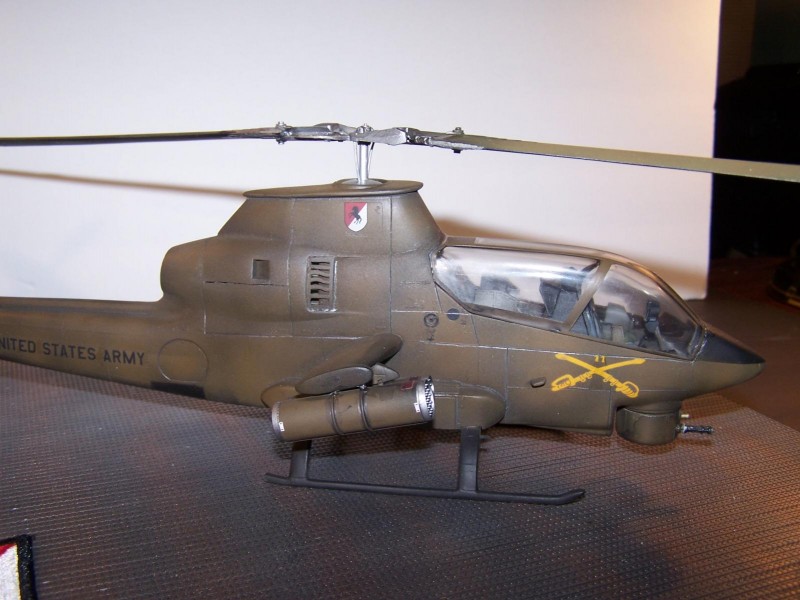 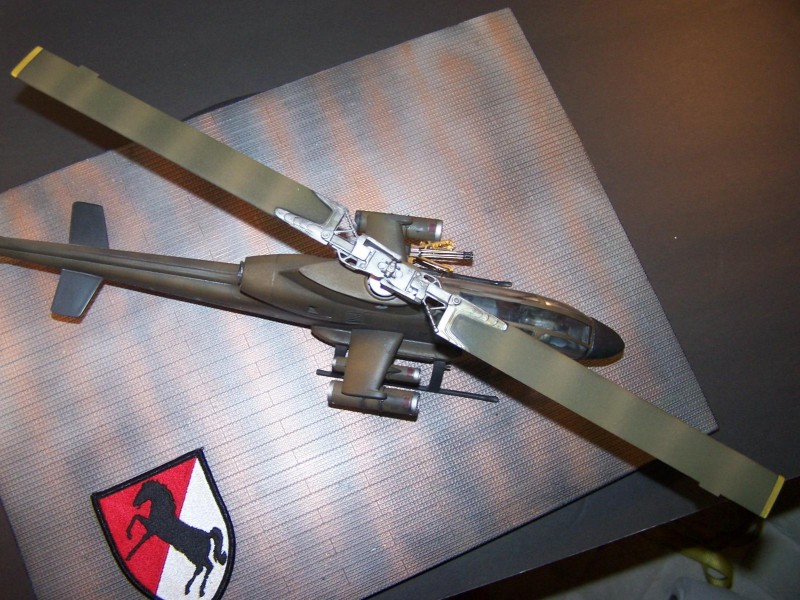 to cut through the intense jungle 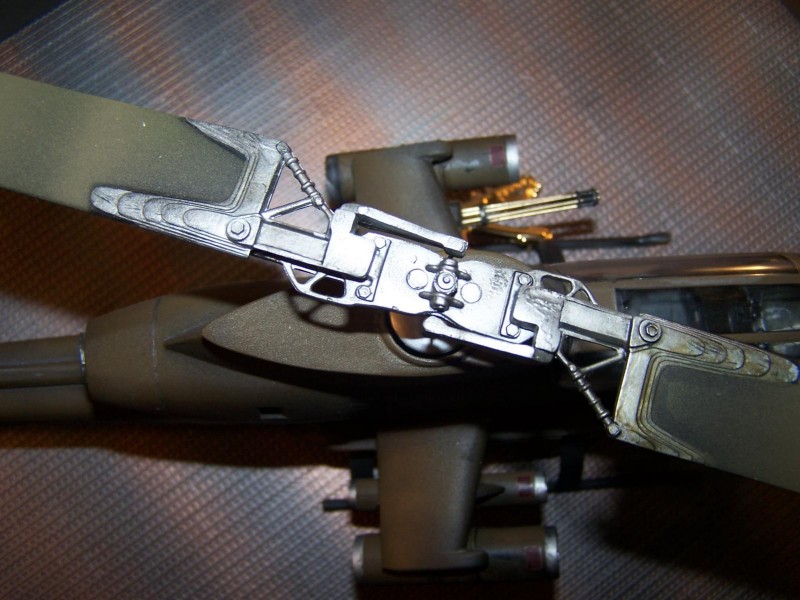 the 155mm Sheridans were replaced back to the Patton as they couldn't fire a broadside on a road in a fire fight without tipping...but gave you some darn heavy artillery support when you got there 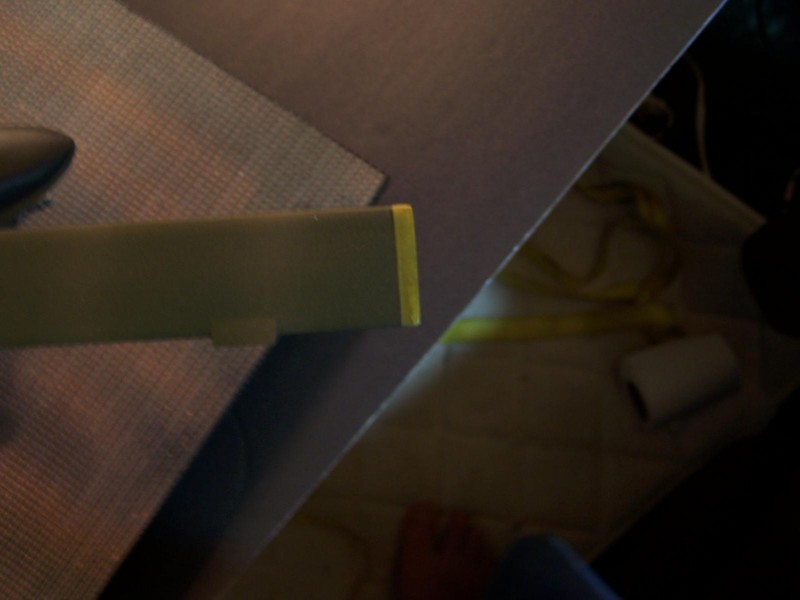 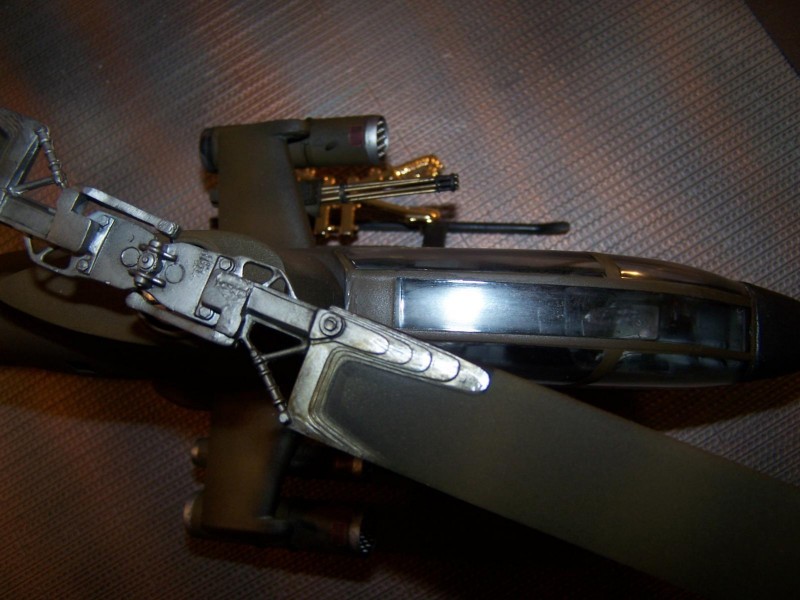 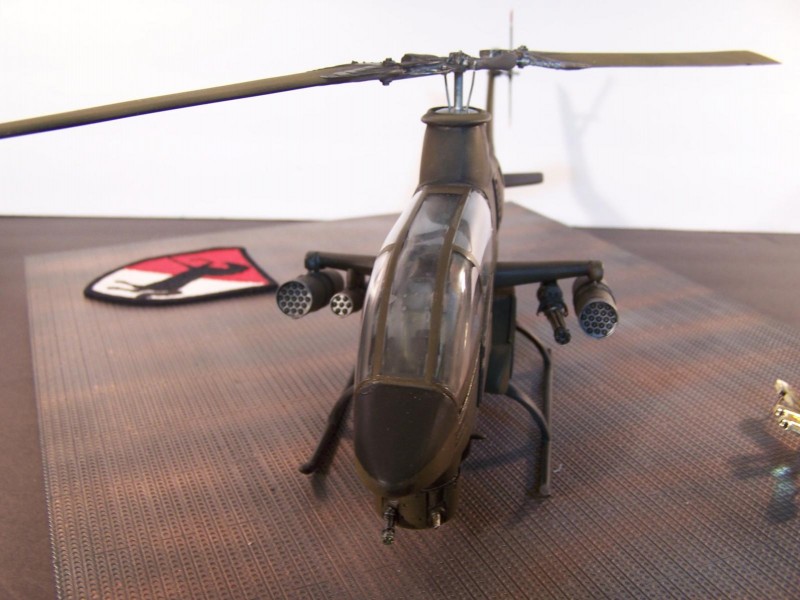 if Bahnsen was a major and was out-ranked by his commander he led all combat operations regardless,that came straight from headquarters 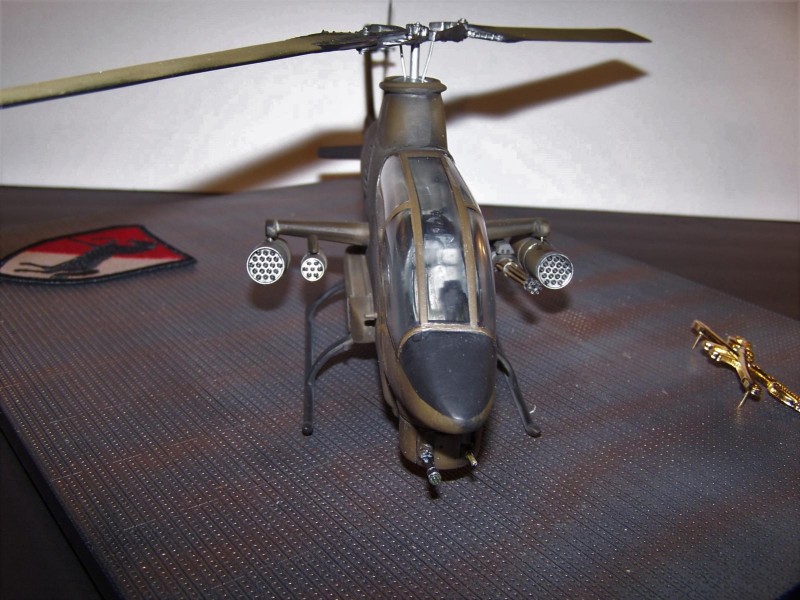 this was a fearless unit...the "blitzkrieg" in spades... 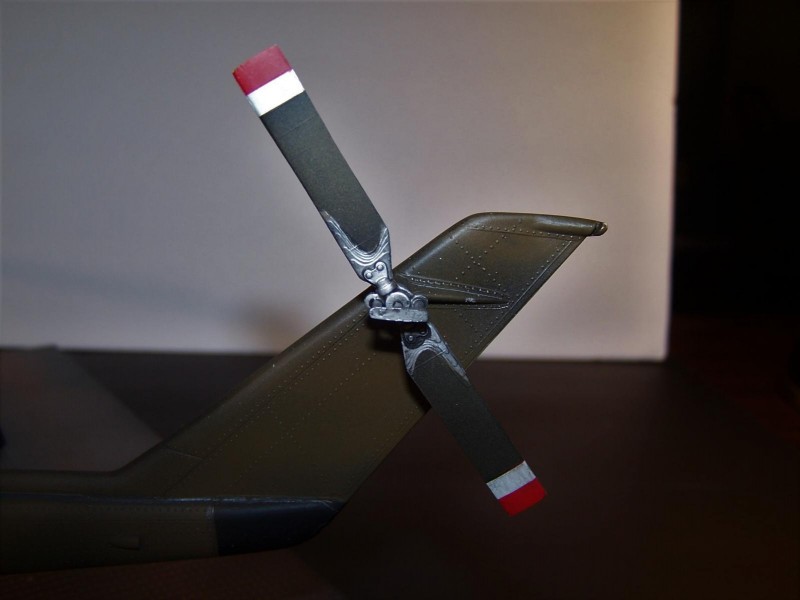 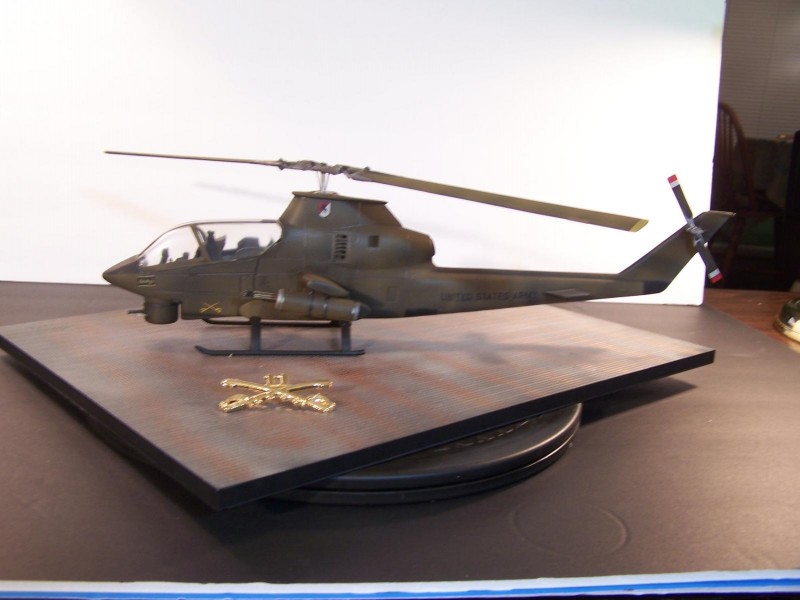 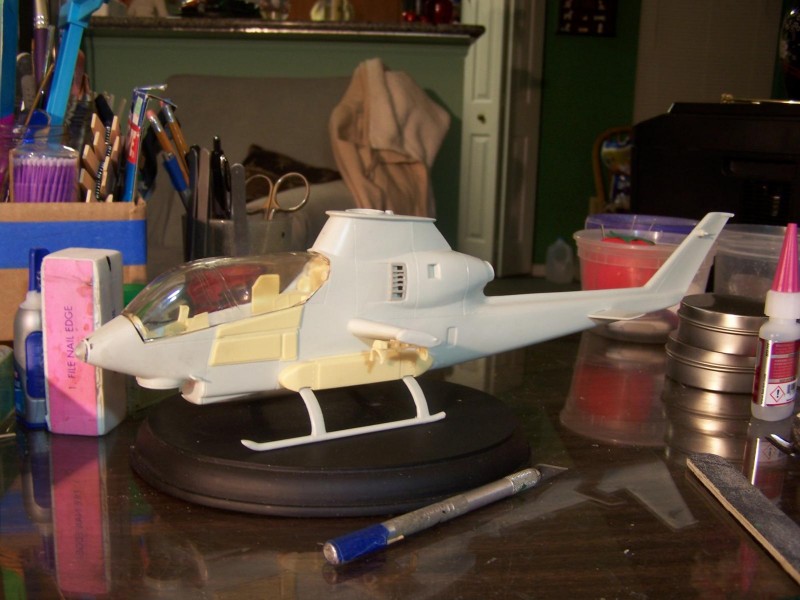 i used the cobra cockpit and resin vulcan cannon saddle bag ammo containers from the fabulous Chris Miller who is in my model club and has told me some great stories of his flying experiences in Nam...he was a hunter scout in one of those magnum p.i. chopper gunships...what a deal...talk about deadly...the saddle bags held 4,000, 20 mm cannon shots...2,000 on each side...about a minute of sustained fire but remember all six barrels rotated more than 10 times a second...chain lightning...the metal vulcan cannon barrels were from master barrels,beautifully mastered but you need a watch maker to assemble them...this Revell 1967 model is a beast that needs to be whipped into submission...they weren't too hip about things lining up back then...drove me to drink and i bought the gas 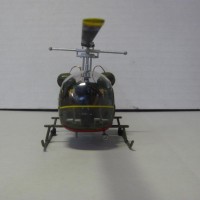 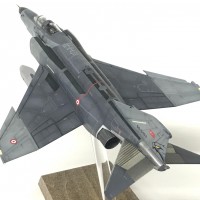 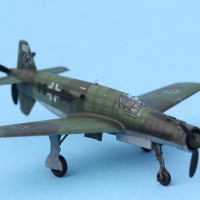 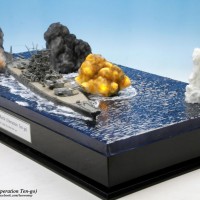