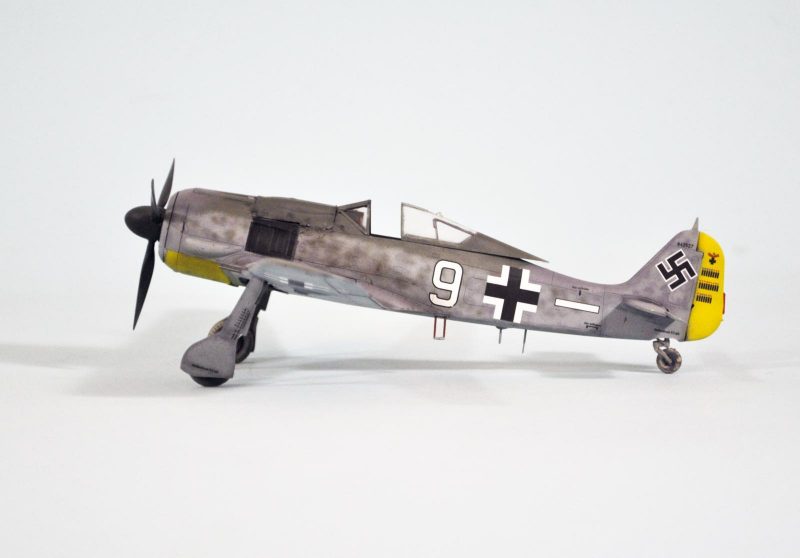 Adolf “Addi” Glunz is one of the most interesting of the Luftwaffe experte. He was born June 11, 1916 at Bresegard in the Lugwiglust region of Mecklenburg, the son Karl Glunz, a Beamter, or civil servant, of the Deutsche Reichsbahn. Due to his father's job, the family moved to Hamburg and in 1934 to Heide. Following graduation from school, Glunz began vocational education in mechanical engineering and worked for a company in Heide which built gliders, triggering his interest in flying. He began building and flying gliders at 16, and became a flight instructor with the National Socialist Flyers Corps 11/16 of the Nord Gruppe (northern group), teaching members of the Hitler Youth to fly.

Glunz attended the compulsory Reichsarbeitsdienst (Reich Labour Service)from November 2, 1938 to March 25, 1939. He joined the Luftwaffe on September 1, the day World War II began. He graduated from flight training on October 4, 1940 and was posted to the Ergänzungsstaffel of JG 52 on November 1.

II/JG 52 was undergoing rest and replenishment at Mönchengladbach following the Battle of Britain. The Gruppe was commanded by Hauptmann Erich Woitke while 4. Staffel was headed by Oberleutnant Johannes Steinhoff. On December 22, the Gruppe was ordered to Leeuwarden Airfield to patrol the North Sea coast. On April 27, they commenced re-equipping with the Bf-109F. Glunz claimed his first victory when he shot down a Spitfire on May 7, followed by a second on May 19.

On June 13, JG 52 moved to Poland to participate in Operation Barbarossa. Glunz claimed an Ilyushin DB-3 bomber on June 26. He claimed two more victories in early July, as well as two tanks destroyed.

Glunz returned to the Channel Front to serve with 4. Staffel of II/JG 26, arriving there on July 8, 1941. He claimed his sixth victory, another Spitfire, on August 27. He was awarded the Deutsches Kreuz im Geld on November 1 with 22 victories. By the end of 1942 he was credited with 23 victories. On March 28, 1942, Glunz intercepted six Mosquito bombers headed toward Dunkirk at low level. He succeeded in shooting down two within one minute for his 28th and 29th victories and scored his 30th victory on April 3. He shot down his first USAAF four-engined bomber on April 5 for his 32nd victory. On August 29, 1943, he became the only non-commissioned officer in JG 26 ever to receive the Ritterkreuz. On December 31, he claimed his 50th victory.

On January 14, 1944, the 5. Staffel Staffelkapitän Hauptmann Johann Aistleitner was killed in action. In consequence, Oberfeldwebel Glunz was appointed his successor and was made a Staffelführer, the first non-commissioned officer of JG 26 to hold such a position. On February 22, 1944, during “Big Week,” he had his most successful day as a fighter pilot; during the course of two combat missions he claimed four B-17s, a P-47, and forcing another B-17 out of formation. Only three B-17s and the P-47 were confirmed for victories 56-59. On March 3, he was appointed Staffelkapitän of 6. Staffel, replacing Leutnant Friedrich Lang who was killed in action on March 2. He was promoted to Leutnant on April 1. On June 24 1944, he was awarded the Ritterkreuz des Eisernen Kreuzes mit Eichenlaub. The award was officially presented at the Führerhauptquartier at Rastenburg on 2 August 1944 by Adolf Hitler. Also present at the ceremony were Friedrich Lang, Erich Hartmann and Heinz-Wolfgang Schnaufer who receive the Ritterkreuz des Eisernen Kreuzes mit Eichenlaub und Schwertern, and Horst Kaubisch and Eduard Skrzipek who were also awarded the Eichenlaub.

Glunz’s final combat mission came on January 1, 1945, when he led 6. Staffel to attack Brussels-Evere airfield during Operation Bodenplatte. With II Gruppe led by Major Anton Hackl, Glunz engaged Spitfires from 416 Squadron that just just made it into the air, shooting down and killing Flight Lieutenant David Harling for his final victory. In addition, he made nine strafing attacks on the airfield, claiming five aircraft destroyed, plus two further damaged, including one through the open door of a hangar.

After leaving JG 26 on March 18, 1945, he underwent conversion training to the Me 262 and joined JG 7 in April, though he did not fly operationally before the end of the war. During his wartime career, “Addi” Glunz was credited with 71 aerial victories, all but three on the Western Front, achieved in 574 combat missions, engaging the enemy on 238 occasions. He is most noted for never being shot down or wounded. The nearest he came to losing an aircraft was on October 13, 1944, when a broken oil pipe caused his engine to fail while in combat with two P-47s.

After being held as a POW from May 1945 to June 1946, he became a Formula Three race car driver. On June 11, 1950, he took third place in the XV Eifelrennen, a Formula Three motor race, driving a Scampolo 501 DKW. On August 20, 1950, he participated in the Großer Preis von Deutschland (German Grand Prix) held at the Nürburgring. At the end of the 1950 German Formula 3 Championship, he finished in eighth place, tied with Oscar Frank with three points each. Glunz participated in various races of the 1951 German Formula 3 Championship, but did not win points. Following this season, he founded his own business giving driving lessons. He was known to regularly drive the Autobahn at over 160 km/hr into his 70s. “Addi” Glunz died on August 1, 2002 at age 86 in Lüdenscheid.

Eduard’s Fw-190A-6 kit was released this past summer. As with all other kits, it has parts specific to the particular sub-type. In this case, that is a lower wing with the proper bulges and shell ejection ports for an MG 151 20mm cannon in the outer wing gun position and the proper rear lower fuselage opening for the GM 50. Decals are included for the usual five aircraft, including two from JG 1's famed “Checkernose” I Gruppe. Other than decals and the lower wing, the kit is similar to the other late-model Fw-190As with the extended forward fuselage adopted with the Fw-190A-5.

Once again, the two most important things for a modeler to do with one of these kits is be certain to cut off all sprue nibs when parts are separated from the trees due to the precise fit of everything, and to commit the revolutionary act of following the instructions. If you do these two things, you are guaranteed to have an excellent model as the result.

Having found Addi Glunz to be one of the more interesting people in JG 26, my favorite Luftwaffe Geschwader, and possessing the Lifelike Decals sheet 48-001, which I had saved for years in hopes of being able to do his “Weiss 9" Fw-190A-7, I decided to do the project with this kit, since the Fw-190A-6 and A-7 are virtually the same, other than the A-7 was the first sub-type to be armed with the twin 13mm fuselage machine guns and used a larger tailwheel due to the increased weight. Both of these items are in the kit, as well as the correct gear well center section and gear doors.

I started by painting all the cockpit parts with Xtracrylix RLM66 Schwartzgrau, then turned to assembling the wing. The most “time-consuming” part of this is assembling all the parts for the wheel wells, which is no problem at all. I also scraped the sides of the inboard cannon bay door that sticks up into the fuselage, to insure an easy fit there. I then set the wing subassembly aside.

I then assembled the cockpit, using all the photoetch for the instrument panel and side panels and seat belts. With the cockpit inserted in one of the fuselage halves, I proceeded to complete the assembly of the fuselage.

The fuselage and wing sub-assemblies were joined and the horizontal stabilizer, elevators and rudder were attached.

I painted the lower cowling and rudder yellow and masked that off. After pre-shading the model, I gave it a standard Fw-190A camouflage scheme of RLM76 lower surfaces, RLM 74 and 75 upper surfaces, with a mottle on the fuselage side and vertical fin of 64 and 75. I used Xtracrylix paint, thinned 30-35% with water (having finally used up the Xtracrylix thiner). I personally think from this experience that thinning Xtracrylix with water rather than their thinner makes the paint better. I had less problem with the paint drying in the air brush tip, and the paint was much smoother when applied. My only regret about Xtracrylix is that I am running out of them and they’re hard to get by mail order from the UK.

I used the kit decals for the stenciling, and the Lifelike Decals for the national markings and individual markings. The decals are for this airplane around mid February 1944 by the victory markings, about the time Glunz took command of the 5th staffel. Everything went down without a problem.

I attached the landing gear, then gave the model an overall coat of Tamiya Clear Flat. The photos of this airplane show that it was well-maintained, so I didn’t “ding it” and limited myself to applying the usual heavy exhaust staining associated with the BMW engine, using Tamiya “Smoke.” I finished by unmasking the canopy and attaching it in the open position.

Hey, it’s an Eduard Fw-190A - the best kits available of this famous airplane. Follow the instructions, use the decals you want, and the result is another excellent Wurger sitting on your shelf. Recommended for any modeler willing to take time and care and follow the instructions in assembling the model. 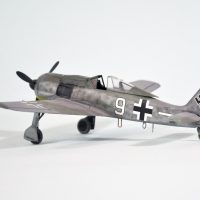 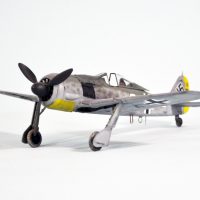 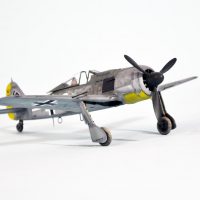 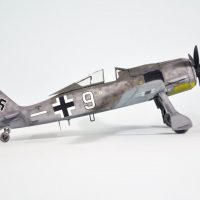 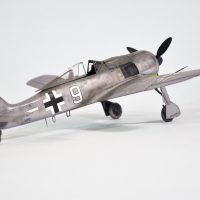 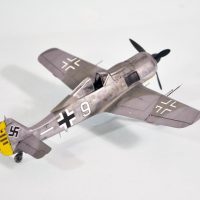 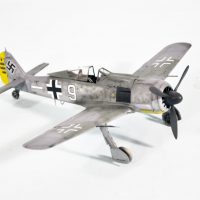 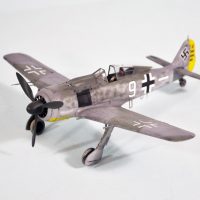 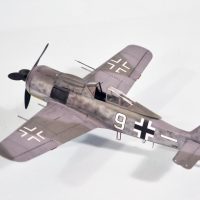 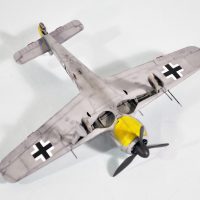 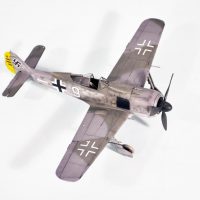 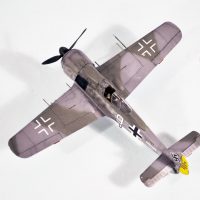 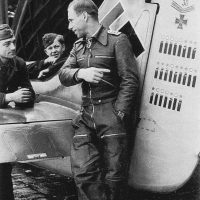 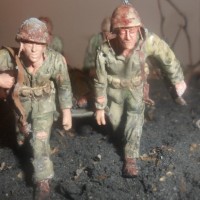 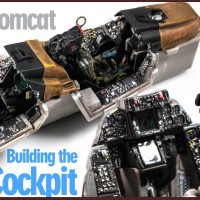 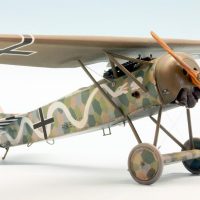