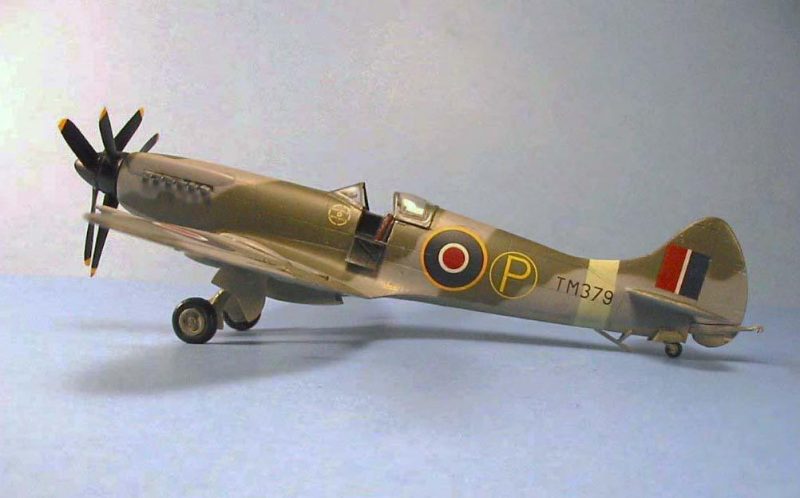 With the publication today of the article about kitbashing a Spitfire 21, a friend reminded me of another conversion I did - going on 18 years ago this coming February. A Seafire 45.

Throughout the development of the carrier-based Sea Spitfire, which was known as the Seafire, developments in the land-based series of fighters were reflected in approximate naval equivalents. The first of the Griffon-powered Seafires was the Mk.XV. The last major evolution of the Spitfire airframe, the Spitfire 21, was developed as the Seafire F.45.

The prototype Seafire 45 was a standard Spitfire 21, TM379, modified to naval standards by Cunliffe-Owen Ltd., the firm responsible for modifying all other Seafires. The major difference was the addition of a stinger-type arrester hook, similar to that fitted to the Seafire XV, naval radios, and catapult points. The non-folding wings of the Seafire 45 were a retrograde step in comparison with the Seafire Mk.III, XV and XVII, which all featured a folding wing.

50 F.45s were produced at Castle-Bromwich from standard Spitfire 21 airframes. The first production aircraft appeared in November 1945, by which time the developmental emphasis of wartime was over; the Seafire 45 was to be an interim type, pending introduction of a definitive naval type based on the Spitfire 22/24. The type became operational in November 1946 with 778 Squadron.

The 5-blade Rotol propeller of the Spitfire 21 made handling aboard ship particularly difficult. On land, the torque created by the propeller was such that from the Spitfire XIV onward, full power could not be used on takeoff until airborne; this was not acceptable for a carrier-based aircraft, due to the limited space on a flight deck in which to attain flying speed. In an attempt to resolve this problem, TM379 - the prototype - was fitted with a Griffon 85 engine and contra-rotating propellers. The standard Spitfire 21 tail unit did not provide sufficient stability with this increase in power; the solution was an enlarged fin that extended well forward. Even this was not adequate, and the eventual solution for the Seafire 46 and 47 would be the fitting of the even-larger Spiteful vertical fin and rudder. The contraprop did solve the problem of adequate takeoff power, and TM379 was operated at sea on several occasions. Eventually, all the Seafire 45s in 778 Squadron were fitted with this engine and prop combination, though none of the others would have the change in vertical fin configuration. By 1949, the Seafire 45 was no longer in use by the Fleet Air Arm.

The Airfix Spitfire 22/24 and Seafire 46/47 kits are among the best Spitfire kits ever released by any company. Two years ago, Aeroclub released a conversion set to create a Spitfire 21, which included a limited-run injection-molded fuselage and horizontal stabilizer, which would be mated with the wing, cockpit detail, landing gear and prop of the Airfix kit. (By the way, this conversion set can also be matched with the Academy Spitfire XIV kit, to solve the problem of the incorrect-size fuselage of that kit).

When I found photos of TM379 with the contraprops and extended fin, I knew I wanted to create a Seafire 45 rather than a Spitfire 21 with this set. I had the contraprop and the stinger hook from the Seafire 47 kit - having used the Cooper Details improved parts on my Seafire 47 - so the only problem would be to modify the fin.

Construction is straightforward. The Aeroclub fuselage is thicker than its Airfix equivalent, so I used my Dremel Tool to thin down the fuselage sides in the vicinity of the cockpit, so that I could use the injection-molded Airfix cockpit parts rather than the white metal parts that came with the Aeroclub conversion set. After sanding the interior smooth, I used Evergreen strips to provide airframe detail, then put in the various parts from the Airfix kit. Once this was done I painted the cockpit black, then attached the seat and made seatbelt harnesses using lead foil from a wine bottle.

The Airfix wing fitted to the Aeroclub fuselage with no problem, though I did use putty along the joints to smooth everything out.

The fin extension was made from Evergreen sheet plastic, and glued to the leading edge of the vertical fin. I then puttied the area heavily, and when it was dry sanded it to shape. I cut off the lower area of the rudder and attached the stinger hook assembly there.

TM379, which began life as a standard Spitfire 21, was never repainted in Fleet Air Arm camouflage colors, being the only Seafire in Ocean Grey, Dark Green and Sea Grey Medium camouflage, with the Sky ID band around the rear fuselage. I used Gunze-Sangyo paints for these colors, and freehanded the scheme, since photos showed this airplane had the late-war "soft-edge" camouflage.

I used decals from the Decal Dungeon on the kit, mostly from old Aeromaster sheets. One has to be aware that the upper wing insignia on the Spitfire 21 is a smaller size than that for previous Spitfires, due to the changes in wing geometry. The Type C roundel I used there came from a decal sheet for the Tempest.

Photos show that TM379 was quite clean, since it was never used operationally. I applied two coats of thinned Dullcote over the final coat of Future, then attached the landing gear, prop, and Falcon vacuform canopy.

The Seafire 45 is definitely one of the lesser versions of this famous fighter, but the changes to TM379 make a model of that airplane very distinctive. This is an easy conversion and results in an out-of-the-ordinary model in the collection. 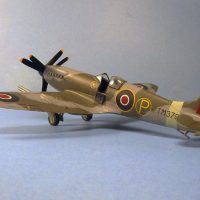 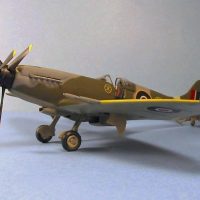 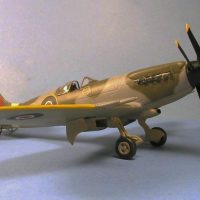 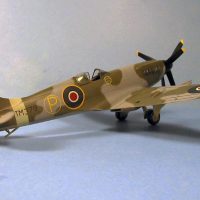 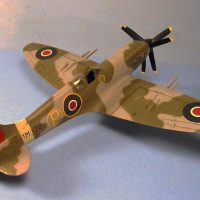 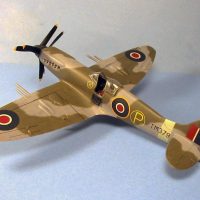 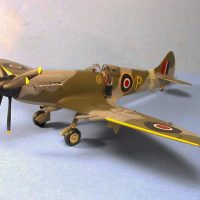 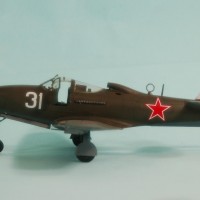 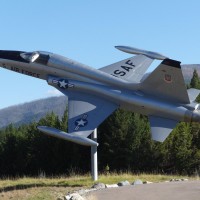 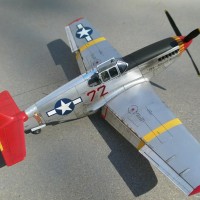 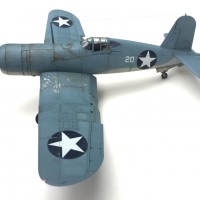