the Hawker Hurricane in Portuguese service

The first six Portuguese Hawker Hurricane, of the Mk IIc model, came from British bases in Libya and flew to Portugal making a stopover in Gibraltar, where they exchanged British identification for rudimentary Portuguese crosses.
They landed at Air Base No. 2 (BA2), Ota, on 7 August 1943 in a transport operation to which the RAF gave the code name “Mildew”.
The immediate mission of these aircraft was the adaptation of the Portuguese pilots to this fighter plane, made by the British pilots who flew them from Libya, with these six planes forming the first Portuguese Hurricane squadron, identified as VX.
Between August 26, 1943 and March 1944, the remaining 97 Hawker Hurricane, essentially Mk IIb and Mk IIc models, arrived in Portugal by sea and were distributed over five squadrons (including the VX), each composed of airplanes of the same version.
The Hurricane squadrons formed were as follows:

Commander Peixoto Rodrigues (see my previous articles on the UH-19 and SB-17G in Portuguese service) flew several Hurricane, including this SU-O, so I had to build this model. When looking for a quality 1:72 Hurricane IIc, I found the "Arma Hobby" kits, full of detail and quality. The kit is presented in a box that allows you to make a couple of versions, with an alternative to open or closed canopy and, depending on the "Expert" or "Standard" edition with or without photo-etched parts for the interior of the cockpit and some masks. In the standard edition the seat belts are from decals and the masks are done by yourself using the templates from the instruction sheet. 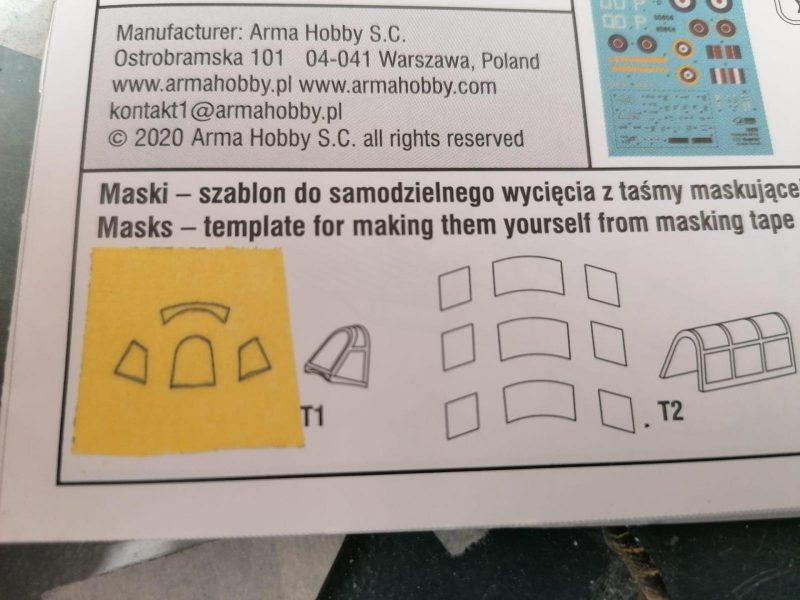 The plastic is very good, the detail is crisp, and the engineering of the kit is also good. However, some pieces are connected to the sprue in a less convenient place and could be an inch to the side without compromising the mould, making it easier for the modeler.
The decals also look very good, although I only used common stencils because the national marks were either painted or from another set.

The building of this kit is quite straightforward and very pleasant, and throughout the painting I found a lot of detail in the model, more common in 1:48 than in 1:72.
Not everything is perfect as said before, but not a problem.
The build started by the cockpit, which is quite nice and detailed with no major problems.
After assembling the fuselage, wings, stabilizers, and so on, I masked the canopy (used the closed one for painting) and proceed for the funny part (painting :-D).
As the kit has so much detail and does not need any filler, I just cleaned it with some IPA and skipped primer (as usual). The painting was, as I usually do, with Mr. Hobby over some pre-shading.
Following my habit of starting by the lighter colour, I painted the wheel wells and then the lighter gray on the rest of the underside.
On top, after applying the camouflage colours, I went on painting the white roundels base to the Christ Crosses on both side of the wings as well as the band on the fuselage near the tail. Having the paint job done, it was time for the first layer of gloss coat to support the decals, followed by another one to seal them.
Painting and decaling was complemented with panel liner and some oils. A small amount of dust and some chipping was also applied, especially in the wheels and around the cockpit.
I tried to reproduce the level of weathering as seen in the photographs of the time, i.e., quite low.
After all the major painting, it was time to fix the propeller, wheels, guns, antenna wire and apply some matt coat.
Due to the pandemic times we are living, I run out of my usual matt clear (Mr Hobby) so had to use Hataka (orange line).
Last, and to conclude, was time to fix the other canopy (the open one), navigation, position and head lights. I painted their location beforehand in silver and gave a touch of colour for the navigation ones. Headlights received a touch of silver from inside the clear part to simulate the lamp.
Some of them as the one on the tail had to be done with a tiny drop of PVA glue.

Well, no…
Looking at some photos I noticed that the model doesn’t had the rear-view mirror, so I scratched one 🙂

It was a quick and enjoyable build, hope you like it.
Cheers,
Manuel