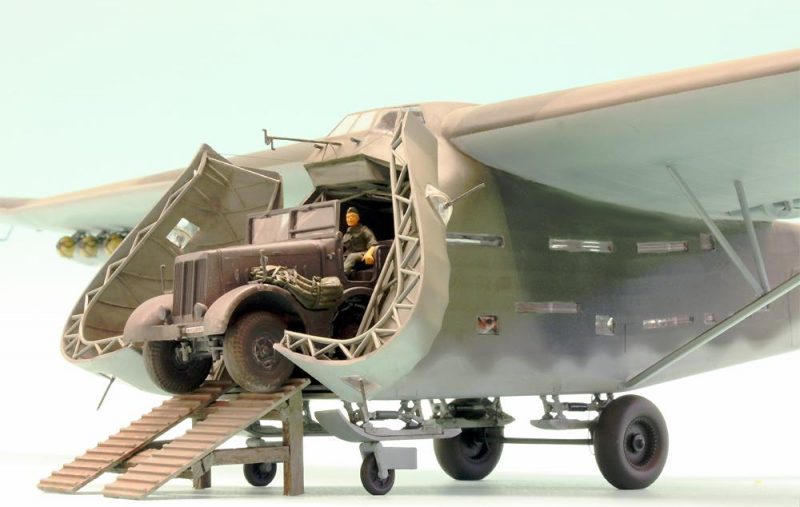 Like its namesakes, the giants of classical mythology, the Messerschmitt Me-321 "Gigant" is the subject of numerous myths and stories. Unlike mythology, however, the facts are verifiable here, but they remain remarkable enough!

About the Me-321 "Gigant"
The history of its development is remarkable: the decision to produce a wide-body cargo glider of unprecedented dimensions was taken against the background of the planned invasion of Great Britain. The surprising successes of previous assault glider missions, which could surprise the enemy in quick commando actions and make carefully guarded defence strategies obsolete, gave the concept of the large capacity cargo glider impetus and support for the planned invasion as well.

The future cargo glider was to be suitable for transporting the heaviest cargo. The tender envisaged a cargo capacity of over 20 tonnes, which would mean the possibility of landing 200 men of fully equipped infantry or, for example, the transport of a Panzerkampfwagen IV.

Two design offices were entrusted with the realisation of these gigantic plans: at Junkers and at Messerschmitt, design work began at full speed in the summer of 1940. After a remarkable short development time of about three months, two competing prototypes were presented almost simultaneously. On 25 February, the Me-321 Gigant took off for the first time, while the maiden flight of the Junkers Ju-322 "Mammut" took place only a few days later, on 12 March.

The Junkers design had to contend with major technical difficulties from the outset, which ultimately culminated in a fatal crash of the only completed prototype. After "Operation Sea Lion" was finally off the table at this point and the Messerschmitt design seemed to prove itself, further work on the Ju-233 "Mammut" was discontinued soon after.

The Me-321, on the other hand, seemed to be under a more fortunate star: the maiden flight was followed by further test flights, which were also attended by prominent pilots. It is known that in addition to the proven Messerschmitt test pilot Karl Baur, Hanna Reitsch also tested the impressive "Gigant".

The dimensions of this world's largest cargo glider knew - and know - how to impress. Typical for a glider are the proportions of length to wingspan: a 28.15 metre long fuselage contrasts here with the 55 metres from wing tip to wing seat. The wing area is 300 square metres. Empty, a "Gigant" weighed about 12 000 kilos, the maximum payload was 23 tonnes. Incidentally, the loading space was calculated in such a way that any freight that would fit on a standard low-floor car of the Reichsbahn could also be loaded.

The speeds at which the Me-321 flew are also interesting. Towing speed was about 230 km/h, while landing speed was only 115 km/h. The descent rate of 7.25 metres per second was associated with a glide ratio of about 1:16.

The environment of the Me-321 infrastructure also included a spectacularly modified DFS 230. In order to accustom future "giant" pilots to the cockpit height of about five metres, the small cargo glider was equipped with landing gear stilts that raised the fuselage to literally "gigantic" heights. Those who are not familiar with the sight of this special DFS 230 should definitely take a look at pictures of this trainer!

While the first A-series Me-321s were still piloted by a single pilot, the B-series production aircraft had two pilots sitting side by side and a third crew member.

For the utility of cargo gliders, the availability of tugs is a crucial point. In the case of the "Gigant", an Achilles' heel was soon to become apparent here. The engine power of available aircraft was simply not sufficient to get a fully loaded Me-321 into the air. The Ju-90 could still be used as a towing aircraft for testing purposes, but it would not be possible to turn it into an operational duo.

However, necessity is the mother of invention. In order to get the necessary power in front of an Me-321, the idea was conceived of linking three Bf-110s together to form a "troika" tow. Considering the difficulties and challenges of a simple tow launch, the daring of this approach seems dangerously foolhardy. Unfortunately, practice also showed how dangerous this towing procedure was. The "Troika" procedure led to serious accidents on a regular basis, most of which ended in the death of the Bf 110 crews involved.

In order to cope with this basically untenable practice and to be able to really use the capacities of the Gigant, another seemingly foolhardy idea was put into practice. From 1941/42 onwards, a total of eleven He-111Z tugs were available. This "twin" consisted of two He-111 H-6 fuselages mounted together over a newly designed wing centre section, whose five Junkers Jumo 211 engines with a total power of 6700 hp actually managed to get a Me-321 Gigant safely into the air.

Another aid was found in the form of mounting two to a maximum of eight Walter HWL-500 launch rockets under the wings. These developed 500kp of thrust during their burn time of half a minute, after which they were jettisoned. The parachutes mounted on their nose allowed these launchers to be recovered and reused.

The massive main landing gear and the two nose wheels mounted under the front landing skids were also jettisoned. The landing was then carried out exclusively on the four spring-loaded skids, whose benefit also lay in the shortening of the landing distance.

At the beginning of the war against the Soviet Union, four transport squadrons with six cargo gliders each were ready. Production of the Me-321 had been discontinued shortly before in favour of the powered Me-323 variant. From the beginning of the "Russian campaign", the Me-321 units were used for supply flights. In practice, however, the lack of suitable tow planes proved to be a major drawback. The situation improved, as already mentioned, only with the appearance of the He-111Z from the beginning of 1943.

Nevertheless, the days of the wide-bodied glider were numbered. In 1943, the remaining Me-321s were still used in their role as heavy-lift transports, but in December the heavy glider units were finally disbanded. The few remaining aircraft were used on the Eastern Front in "one way missions" for supply flights of trapped troops.

My model shows a Me-321B used in 1941/42 in the southern section of the "Eastern Front"; the markings for it come from the kit.

About the kit and the building process
The kit, first published by "Italaerei" in 1976, still shows charm today: the individual parts seem to reproduce the forms of the prototype in a dimensionally accurate and credible way, but do not overdo it with details or even chronic "rivet counting". The box, which is large due to the dimensions of some parts, appears sparsely filled at first glance.

The construction itself is accordingly quick and does not pose any serious challenges to the modeller. Only the building instructions, which remain unclear in some points, can lead to delays. For example, the position of the auxiliary take-off rockets or the landing skids/gear is not specified with sufficient precision. Only when the components are examined closely are there delicate markings. My advice: take care not to make these inconspicuous markings disappear completely when sanding the components beforehand!

All in all it has to be said that a precise and appropriately detailed research of the prototype is an absolute must for this model. Many things, such as the actual design of the rocket suspension or the shape of Walther launching rockets, are far too inaccurate for today's expectations or simply wrong.

I have put a lot of effort into the reconstruction of the Walther rockets, which have already been mentioned several times, as they are quite a characteristic feature and are also quite eye-catching on the model. The Italeri components - two simple egg-shaped half shells each - form the core of my improvement attempts. I drilled holes of different sizes in them and girded them with a Tamiya tape. The whole thing was then painted with different shades of Alclad metal. The parachute also got some details with material from the etched parts box and also with modified Tamiya tape. The final part was a strop, which, attached to the parachute pack and to a strut, would open the parachute in the original. I was able to create this with twisted copper wire.

A few more refinements were made in the form of new MG 181 from Gaspatch as well as wiring and bracing on the landing gear and in the interior. The cockpit also benefited from leftover etched parts and seat belts from Eduard.

Already at the beginning of building I had planned to illustrate the size and volume of the "Gigant" with an addition in the form of a loaded vehicle. Based on prototype photos I chose a Sd-Kfz.9 "Famo" from Revell. I seem to have made a good choice, as this modeling side show has quickly become a source of new experiences and pleasing results. If you are interested in the kit and the building process of the "Famo", I would like to refer you to the corresponding article via this link: https://imodeler.com/2021/07/does-famo-stand-for-famous-it-would-be-justified-the-schwere-zugkraftwage-18t-sd-kfz-9-famo/

Finally, I may say that the designation "giant" for the Me-321 seems to be well chosen also from a modelling perspective. In any case, the dimensions of the completed model are "gigantic": the Me-321 towers over even the previous record holder in my display case, a YB-35. But the gain in knowledge and the experience of working with such a sprawling model on the workbench and having a wheeled vehicle closely coordinated with this aircraft model were also great. Last but not least, the joy of having brought this giant from the realm of myths into the reality of the model construction showcase is also great! 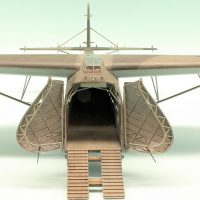 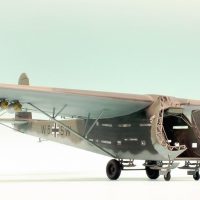 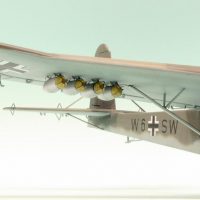 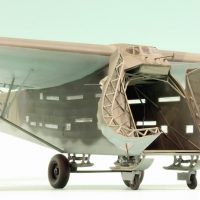 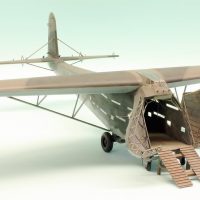 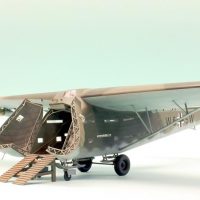 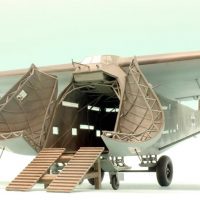 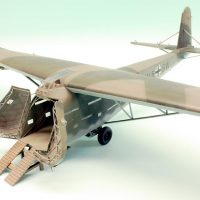 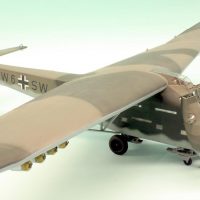 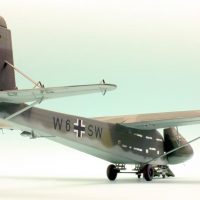 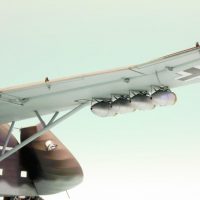 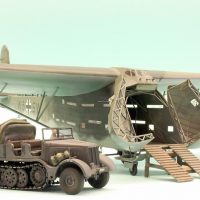 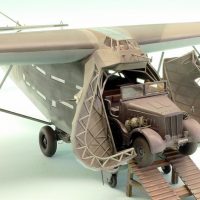 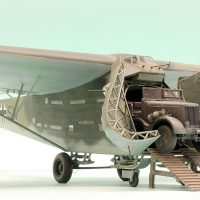 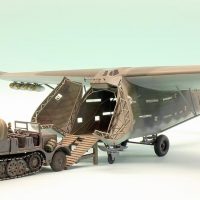 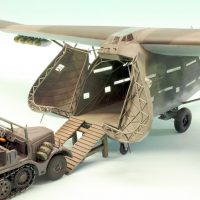 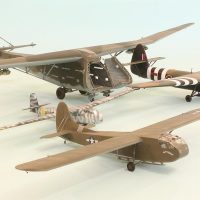 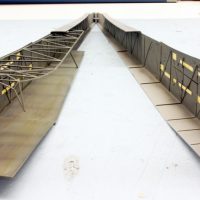 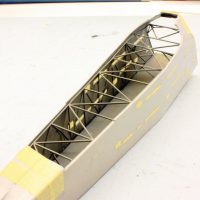 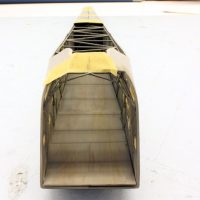 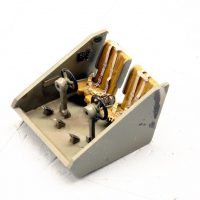 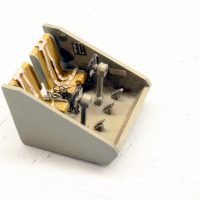 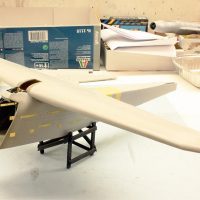 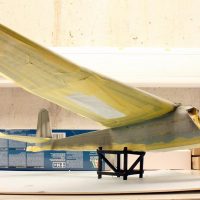 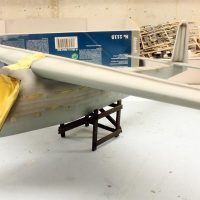 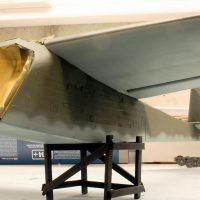 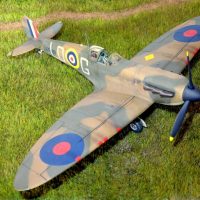 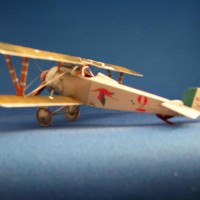 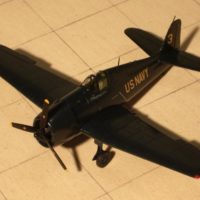